David Roberts Art Foundation opens a new group exhibition of rarely seen artworks from their collection, titled Albert the kid is ghosting and occupying the whole DRAF building from September 25 to December 12.

The exhibition transforms the art space into an “unsettling mise-en-scene of defiance: a crime scene”, presenting each work in a precisely-designed environment—from Josephsohn’s brass head to Guston’s wall of dark floral wallpaper. 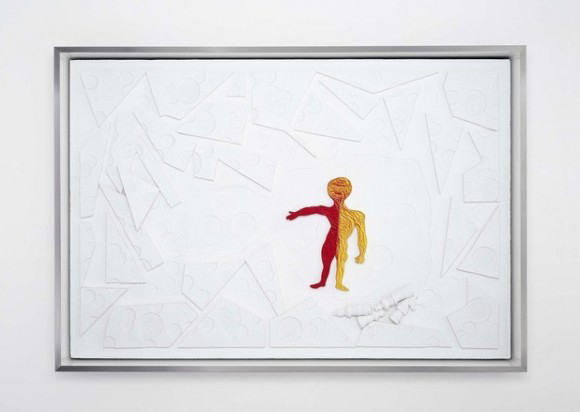 A two-day programme of events, Present Fictions, is on at London’s David Roberts Art Foundation, running March 28 to 29.

Including screenings, performance lectures and discussions, the focus is on exploring the relationship of technology and information with visual culture, poetry, science fiction and narrative structures.

Events worth checking out include a screening of works by Hannah Black, Hannah Perry and Richard Sides on the afternoon of Friday, March 28, as well as a talk, ‘From Production to Consumption’.

On Saturday, there’ll be readings and distributed texts at Ami Clarke of Banner Repeater‘s ‘Unidentified Fictionary Objects’, including performances by Erica Scourti and Jesse Darling. There’s poetry reading by Sam Riviere, a rendition of Keren Cytter‘s ‘Poker Face’ (2009) with Andrew Kerton and performance lecture by Rózsa Farkas, ‘It’s Not Me It’s You’, based around a text written by Farkas and the idea of “anger as a media and medium in art” that also inspired THE ANGRY SHOW.

Films by Michael E. Smith –who’s showing with the Geographies of Contamination group exhibition on display in the gallery in parallel –will be screening from midday to 6pm both days. There’s also a performance and investigation into sincerity versus authenticity with ‘I Know That Fantasies are Full of Lies (Take IV)’, so best just see it all.

See recent install photos from THE ANGRY SHOW and the DRAF website for details. **

Header image: Still from Richard Sides, ‘He tried to be a nice guy, but it just didn’t work out’ (2012). Courtesy the artist and Carlos/Ishikawa.

Curated by Burke and km temporaer intiators Elisa R. Linn and Lennart Wolff, the event brings together the work of 18 artists exploring the function of commodified experience and the role of art production in a continually expanding market.