Generously offering various routes into its discourse, How to Sleep Faster is the digital sister series to Arcadia Missa’s print publication of the same name. Providing just as much depth of content as the previous editions, episode 3 operates on its own custom platform –an element of the ejournal which is reimaged for each individual online publication, transforming the same domain. For this project, a structure of responsive, pastel degrade grids extend outwards and downwards, revealing a collection of thoughtfully curated works which all connect to themes laid out in a rather magnificent editorial essay. Such an assemblage of content gives the online project the feel of a space rather than a browser page: an exhibition rather than a publication. It encourages exploration.

This is all carefully considered, of course –and the particular presentation of How to Sleep Faster only initiates the allusion of what this impressive (and ambitious) collection of work investigates: digital systems and context. As an exhibition, involved pieces relate to each other, and particular themes accumulate throughout the duration of the viewer’s involvement. A moment in Daniel Rourke’s interview with Dora Budor picks up on this interpretational process: Budor’s work ‘New Lavoro’, which culminated in the hosting of a competition for artists in the style of a reality TV show (at Venice Biennale), illustrates artistic labour as a system, in which different parts of a project make themselves and contribute to each other. Challenging systems in this way echoes the video work of Andrew Norman Wilson who questions responses to capitalist imagery and expectation in ‘Confused Foreigner at McDonalds Hoog Catharijne’. The journalistic approach to his practice, aiming to promote an awareness of contemporary subjective systems, also confronts Marxist (and Capitalist) ideologies –as an invitation to figure out some solutions. It’s recognised by Ben Clarke in his essay ‘DC Cinema’ as a particularly appropriate medium: the economy of moving or digital images recognises the system of cinema image distribution, as well as the transaction of profit.

But this Capitalist exchange is not the only recognised routine. The monetary gain made by distributors and cinemas is partnered by a physical transaction, “of bodies to the multiplex each week and their relationship with the screen”. The material realities resulting from interaction with technology is crucial throughout How to Sleep Faster, itself a critically digital ejournal. Maja Cule also challenges various necessary interfaces between body and representation, arguing in opposition to a particularly well-referenced figure of modern art history. Walter Benjamin’s now classic notion of “aura” collapses in the context of contemporary visual or social media: Cule suggests that each time a moving image is watched, it’s aura in fact expands –and with single videos on YouTube racking up millions and millions of views, this inversion of an established idea certainly seems justified.

Like choosing to watch a clip online, making a decision within a system features in Leslie Kulesh’s concise piece, presumably arbitrarily named ‘Pop Up Penguin Palooza’. Choosing to be active or passive when faced with her instruction inevitably results in some kind of physical movement (of the mouse or trackpad) – further implying the suggestion of confusion and tension between virtual consequences and human actions. The “truth to materials” as the evidence of self-production in Daniella Russo’s film ‘Tear, Break’ highlights this tension, as does the visual focus on texture and surface in Jala Wahid’s ‘Wearing Natalie Portman’. It’s a point of contention when the fluidity and ease of online action or movement simultaneously enacts the opposite on the body. 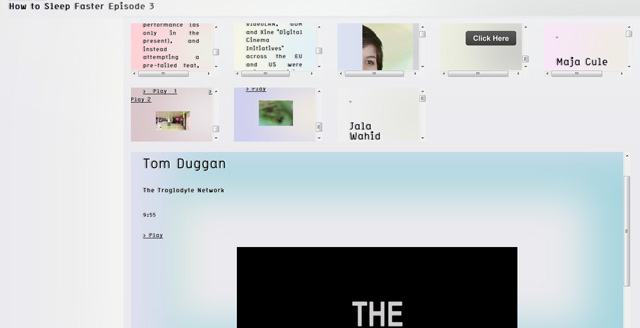 But the risks of engaging with a system (as lifestyle) that relies so heavily on software and hardware is made unassumingly desperate in Tom Duggan’s absorbing and haunting story of ‘The Troglodyte Network’. Our dependence on the internet and digital information networks –even as a way to facilitate the most personal, intimate and menial tasks –leaves its subject feeling isolated, despite the re-imagining and initiating of new data systems and communities. Duggan’s use of technical language, combined with the surrealism of the story, the real situations the subject finds himself in, and the dry wit with which they’re retold leaves behind a residue of a sad narrative –it seems to reflect some of the actual culture structures of contemporary society’s processes.

Despite the variety of references, histories and mediums of the pieces selected for How to Sleep Faster episode 3, all of these works aim to bind together their separate and often complex parts, rather than to investigate them individually and untangle them further: the featured artists explore that infinite process of interpretation, presenting their distribution and narrative (crucially, in the context of the digital) as the artwork itself. The exhibition’s editorial, which was a joy to read, begins by recognising the “two absolutes we can never attain. One is freedom and the other is authenticity”. By giving the featured pieces a firm position in an informed, art-historical discourse, Arcadia Missa not only offers a legitimate platform for such work to be viewed from (in an appropriate format), but recognises the contextual position of many artists who are making their way through the complicated systems of our contemporary, information society. These artists are not working towards answers as absolutes. Instead, the collapsing of symbolic reference in a digital context is refused by the body –those material realities engaging with the webcams and keyboards that they control. **

‘How to Sleep Faster’ episode three is showing online at howtosleepfaster.net.