Time and how it manifests in art is a key theme of a 14-page, print-only written exchange between curatorial project km temporaer‘s Elisa R. Linn and Lenart Wolff and curator Hicham Khalidi. It forms the basis of the One step ahead moving backward group exhibition held at Berlin’s LEAP, running October 31 to November 22 and features solo and collaborative works from 12 contributors, including Andreas Greiner, Armin Keplinger, Wolfgang Laib and Paolo Thorsen-Nagel among others. The outcome is an eclectic exhibition of art and artist ideas made up of disparate, at times conflicting elements that somehow coagulate under the notions of contemporary artwork as gesture, curation as process and communication as value.

Outlines of human figures and drawings of organs cover thin fabric, half stretched and hanging from the ceiling in Mariechen Danz‘s ‘Tower Vessel Tooth, Book B / Book C’ (2013). It explores information transmission through a combination of Mesoamerican art and contemporary technical language in drawing and print, while another sculpture, ‘Modular Glyphic System’ (2013) – made in collaboration with Genghis Khan Fabrication Co. –  resembles a PC computer case of thin metal that can be taken apart and recombined into other forms.

In the background the grafitti inspired wall painting overlaid with a video projection is Kerstin Brätsh and Debo Eilers‘ collaborative project KAYA + n.o.madski. It’s an installation using a certain ‘street’ vernacular more visible in the public rather than private space, yet dominates a LEAP gallery wall in ‘untitled – rewind’ (2014). Meanwhile, a zoom-out in scale presents Adriana Ramić‘s text-based work ‘The Return Trip is Never the Same (After Trajets de Fourmis et Retours au Nid, M. Victor Cornetz, 1910)’ (2014) across three touch screens. Recently shown as part of the Never cargo terminal… exhibition at LA’s Smart Objects in July and based on French civil engineer Victor Cornetz’s studies of insect movements, the work follows an ant pathway across multilingual translations and crowd-sourced dictionaries using an Android Swype. Navigating through their pages, the audience follows their nonsensical logic via colourful abstract lines that are the sequential index of keyboard gestures.

Language and its interpretations and barriers is again explored via Brian Jungen and Duane Linklater‘s ‘Modest Livelihood’ (2012), as the two artists of British Colombian ethnolinguistic heritage screen a hunting trip with Jungen’s uncle within the bounds of a First Nation territory since restricted to within “moderate livelihood”. Tina Kohlmann‘s own reinterpretations of ethnological artefacts are realised in her brightly coloured textile installation named after the inuit sea mammal specialty ‘Mattak’ (2014), while Fabio Marco Pirovino‘s ‘Drawing (Scribble) VIII’ (2014) presents abstract drawings using its eponymous digital ‘Scribble Pen’ that allows its user to scan colour in the ‘real’ world and transfer it to a tablet or mobile device and thus a virtual one.

Documenting the performance of holding a bubble-level tool straight while jumping out of a plane to the tune of ‘Theremin Queen’ Dorit Chrysler‘s cover of The Beach Boys’ ‘Good Vibrations’ is ‘Untitled (Leveling a spirit level in free fall feat. Dorit Chrysler’s BBGV dub)‘ (2009). It’s a video work by João Onofre examining the relationship between physical performance and cinematography, screened from a TV and propped in a corner, while Luca Pozzi‘s curved ‘Wall String #8’ (2013) crosses the art and science divide most succinctly, where pieces of diamond plate aluminium is curved into organic shapes that are poetically ended by balls that stretch out and almost touch each other. All the while Tiril Hasselknippe’s series of five flat sculptures are spread out in ’29 Palms’. Working with nature, the forms are made of thin synthetic material and earth becoming hybrid islands that dot the suspended non-space of a neutral-grey gallery floor. **

One step ahead moving backwards group exhibition was on at Berlin’s LEAP, running October 31 to November 22, 2014.

New York’s Old Room will be hosting a group exhibition titled Is it much too much to ask, not to hide behind the mask at their West Village space from September 13 to 28.

The group show is curated by Gregor Quack as well as Elisa R. Linn and Lennart Wolff of Berlin’s km temporaer and titled (maybe) after a lyric from 1968 The Nova Local song ‘If You Only Had the Time’ -otherwise its sampling on the the Danger Mouse and MF Doom collab track ‘The Mask‘.

Work by 10 contemporary artists, including Darja Bajagić, Hanne Lippard, Olaf Breuning and Debo Eilers, will feature as well as a performance by contributing artist Liz Magic Laser and a reading by fellow contributor Heather Guertin at the official opening. Is it much too much to ask… will also bring an evening performance on September 20 by an Hayley Aviva Silverman, another artist featured in the show.

Read a review of an earlier km temporaer show and see the Old Room exhibition page for details. ** 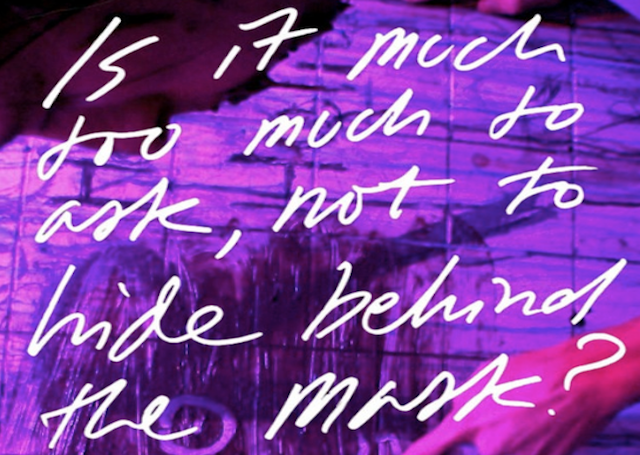 Featuring a series of sculptures by Eilers and new installation works by Kokoska, the exhibition takes the notion of the ‘spacious soul hole’, as introduced by Gerardo Contreras of Preteen Gallery‘s written piece accompanying the exhibition’s press release.

Echoing questions of the body and its embeddedness in Western power relations heard before in our interview with Hannah Black, Rare Angel explores the fate and trajectory of ‘post-human soul’ within the “contrapuntal progressions, pervasive meditations, and ever faster, increasingly interactive schizo-systems” of the modern world. 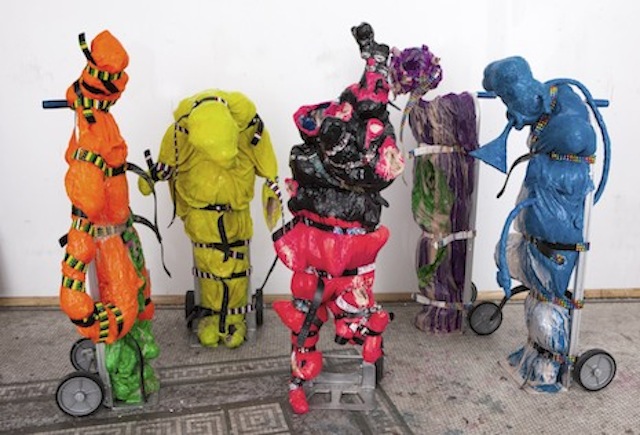