The Shaky Towns group exhibition is on at San Francisco’s Alter Space, opening August 6 and running to September 17.

The two-part exhibition will simultaneously be held at Alter Space and The Battery. It features fourteen artists currently living and working in Los Angeles and San Francisco. The intention and theme is to create visual dialogue between the two cities, while “concurrently addressing their divergent attributes”. There is an emphasis on the two areas and the artists that reside there, but also how the selection of the work is “uniquely attuned to the variant of the two physical spaces”. 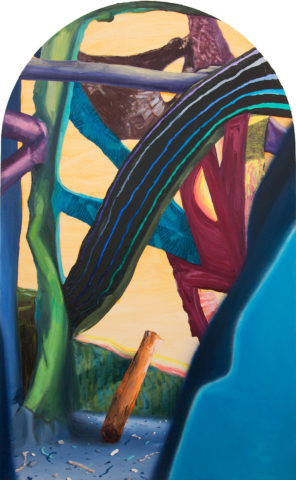 This month finishes Joshua Hagler‘s residence @ San Francisco’s Alter Space Jail Cell Residence, which as its own name suggests, offers any selected artist to work in the dedicated jail cell Alter Space have in their basement. A unique and inspiring (or at least, distraction-free guaranteed) environment apparently Koak and Kevin Krueger decided to keep after installing themselves in the bondage store that previously occupied the building…

For the Sept-Dec period JH proposed his project “In The Box Beneath the City”, an illustrated book where Joshua “frames and contextualizes interviews with artists in a way that is different from the original intentions of the interviewee”.

Material for the book is generated through a sort of game between interviewer and interviewee. There is no record-keeping device except for my sketches and notes. No audio or video.

We make a mutual verbal confidentiality pact. Together with the interviewee, we decide on an alter ego, a spirit animal, mythological character, costume, or whatever, which will determine how he/she is drawn as a character, so that the individual is disguised but still unique.

The rules and obstructions are designed in such a way as to shift power from interviewer to interviewee, so that I am also required to answer questions. This makes me as vulnerable and requires a mutual trust. As both character and author, the inherent manipulation in storytelling is made transparent. Theoretically, what I want to create is a metalanguage that can tell the story about how the story is constructed while still allowing the story to be told within itself.