The show’s press release explains the relationship between the collapse of the gold standard and the rise of conceptual and immaterial art in the early 1970s. How do artists avoid or address the issue of making a commodity now, in a neoliberal framework where the dynamic of the financial market is no longer necessarily understood to be in a volatile, global and sparse field but held by fewer and more powerful corporations.

The event is part of a special season-long series collaboration titled Networked Culture, Digital Politics between Carroll / Fletcher and Verso Books which examines the relationship between culture and digital technology.

Jacques, author of Trans: A Memoir published by Verso this year, joins artist and writer Darling to discuss feminist thought, queer theory, non-binary and trans-identities and “their articulation in online spaces”, as well as the general artistic practices and explore both body and technology.

Carroll / Fletcher is bringing artists Kim Asendorf and Ole Fach together for a two-person exhibition titled Computer’s World and running at the London space from January 22 to February 21.

The fictive world created by the two artists ascribes markers normally associated with sentience to machines, creating a uncanny “familiar world made strange” in which the machines do as humans do, looking, analysing, expressing, rejoicing, “all the while watching us, consuming us, reflecting us, learning, becoming… becoming us.”

While Asendorf and Fach’s show questions how computers experience the world, Helen Carmel Benigson‘s opening night performance, ‘Anxious, Stressful, Insomnia Fat’, inspired by a health app that monitor’s women’s bodies, uses everything from a rap performance by alter ego Princess Belsize Dollar to live female weightlifters to explore the”flatness prescribed by the Internet onto the body”, much like Kate Cooper’s recent show at the KW Institute for Contemporary Art. 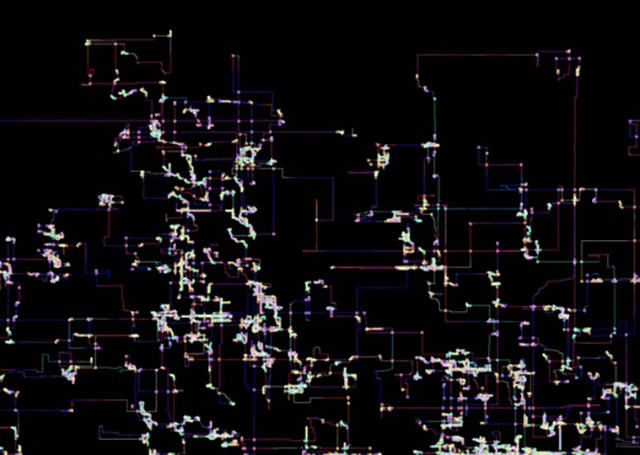 The Dutch artist has made a career of exploring the internet as a medium and mode of creativity, and his latest exhibition continues the trend. With Stringendo, Vanishing Mediators, Dullaart dives into the linguistics of digital communication, investigating how computer software and technology has transformed art and culture.

Featuring a series of family photographs dating back to 1984, “the dawn of the digital era”, as well as a series of restored images called ‘Jennifer in Paradise‘, the exhibition becomes a sort of digital excavation, with Dullaart as the leading archeologist of our digital origins.

Read an interview with Constant Dullaart and see the Carroll / Fletcher exhibition page for details. **

The three artists investigate the relationship with landscape and architecture and their role in shaping memory and temperament, social and political networks, through sculptural installation, photography, video and illustration. In setting the natural against the urban environment and exploring their effects and outcomes, it makes you wonder, with all this focus on the impact on the online interface, whether we haven’t skipped a step or two.

Practicing in Berlin since 1988, the artist working within photography and video approaches his ‘visual futurist’ practice by fusing reality with the virtual utopias one can only hope to look forward to in a rapidly evolving technological era, giving form to his visions of a ‘telematic society’.

People look shocked in Eva and Franco Mattes latest work ‘Emily’s Video’. Some hang their heads in shame; others cover their eyes. It’s unclear they’re watching but the artists assure us it’s “the worst video ever”. The original clip these volunteers are watching is never actually shown. In fact, it’s said to have been destroyed, along with anonymous P2P network ‘darknet’, which the blurb for Carroll / Fletcher’s Brand Innovations for Ubiquitous Authorship -running Saturday, April 23 to Thursday, May 11 -claims is “the internet’s disturbing alter ego”. It must be something terrible.

You might argue the volunteers knew what they were up for. “NOTE: Emily’s Video is extremely graphic and extremely violent. EXTREMELY. We don’t recommend it to anybody”, runs the artist disclaimer. The viewers are primed for what they’re about to watch, and, in a sense, made to feel they should be guilty before they record themselves. And that’s just it. Afterfall editor Melissa Grunland notes that their skill lies, not just in the fact they work online but that they know how to tell stories and manipulate emotions. Arguably one of their cheekiest works, ‘NikePlatz’, saw the two Mattes’ install a fake headquarters in Karlsplatz, Vienna, claiming that the company had bought and re-named the square, causing an uproar and provoking an unsuspecting audience.

‘Emily’s Video’ questions trust to an even greater degree and that includes our very own reactions. Artinfo’s Ben Davies argued that, essentially, the Mattes’ “hijack the ‘Two Girls One Cup’ reaction-video craze of a few years ago”, where two fetish stars eat each others excrement, and add a bit of mystery by deleting the original video. But their artwork is not a ready-made and the point is not so focused on our shock towards the darkest parts of the internet but that we rely on users’ expressions to make judgments on what they see, and how they behave.

Fact and fiction, reproduction and authenticity, this is how we, as voyeurs, come to understand a subject and how we gauge our opinions in relation to another audiences’ reaction. The idea of an original ‘Emily’s Video’ points to a deeper Internet and a deeper truth. ‘Darknet’ is a real area of cyberspace that only users with software such as Freenet currently have access to. Whether these software programmes have a potential to unlock a Web 2.0 version of Pandora’s Box is yet to be seen. **

‘Emily’s Video’ is showing alongside the Eva and Franco Mattes-curated grup exhibition, Brand Innovations for Ubiquitous Authorship, at Carroll / Fletcher Tuesday, April 23 to Saturday, May 11, 2013.