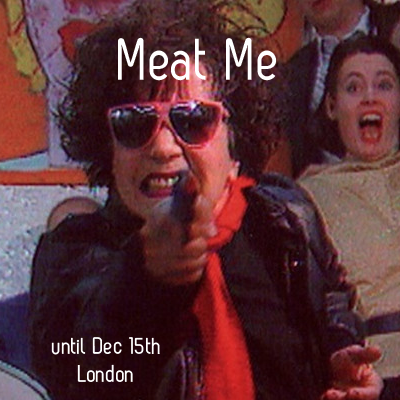 This weekend opened  Terese Schulmeister ‘s first debut solo show in a UK institution: Meat Me, a small but aggressively concentrated exhibition of some of Schulmeister’s key artworks from her post-Viennese Actionism period in the late 80s.

Central to the exhibition are three feature-length narrative videos made between 1984 and 1991 while Schulmeister was an active member of the far-left commune established by Otto Muehl at Friedrichshof, just outside Vienna. Schulmeister’s videos from the Friedrichshof period – produced in collaboration with Muehl – are anarchic, low-fi, gory and satirical and covered various subjects from the golden age of Vienna Modernism (Back to Fucking Cambridge, 1987), Andy Warhol in all his factory period pomp (Andy’s Cake, 1991) and Vincent Van Gogh, reimagined as proto-hippy provocateur (Vincent, 1984).