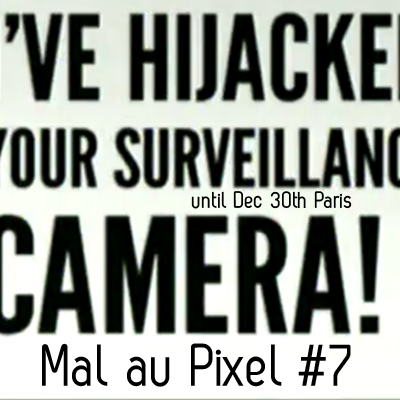 Knowing when you’re going to die it’s somehow scary, so when you enter the dark room with Timo Toot’s “Memopol II” machine installed @La Gaîté Lyrique and ask it to scan your ID for “public” information about yourself you may get the nasty surprise of learning when your government (or some other dark international institution) expects you to die. For me… in 2057, something I’m not looking forward too.

Memopol II is one of the 5 installations proposed at the just-opened exhibition “Network Hack”, part of the festival Mal au Pixel #7 which this year gets a bigger and bolder push by occupying  La Gaîté for 2+ months with a long list of workshops, talks, projections and more.

Mal au Pixel started back in 2006 (and came out of the Pixelache international network) as a way to present new artistic projects and prototypes mixing open source cultures, arts, science and civics. For this edition artists, hackers, researchers and activists were invited to present their works and prototypes, aiming at subverting surveillance techniques and control societies…. scary enough to get us intrigued.

Some of the 5 works presented in this edition are extremely well- known, like Julian Oliver & Danja Vasiliev’s Newstweek which buzzed all over the Internet last year, others come as a surprise and they are all worth experimenting and analysing for a few minutes each… !Mediengruppe Bitnik’s surveillance chess, Julian Oliver & Danja Vasiliev’s Newstweek, Telekommunisten’s R15N, Timo Toots’ Memopol II and Benjamin Gaulon 2.4ghz.

Going on until late December, you’ll get the possibility to see several experimental movies, talk with the artists themselves to discuss the issues of surveillance technologies or go to one of the weekly workshops for learning some Steganography or learning how to StreamYourself.