The Hejduk towers are probably the most iconic element of the new Galicia cultural city and also a new symbol for this beautiful northern land. The new complex architectural environment under construction is on the Gaiás mountain near Santiago de Compostela (Spain)…

END_OF_DOCUMENT_TOKEN_TO_BE_REPLACED

Tweet “Paris used to be that city where dying of hunger was considered an art” says one of the characters in “La Sombra del Viento”; well, dying of hunger, alcoholism or any of the unfortunate fates coming out of the hill of martyrs was considered an art in the 1880s. That was way too many years ago. Today’s bohemians living in the Ville-Lumière do nowhere near starve or try to feed on love or air. The atmosphere and breeding ground for creativity is no-longer present in this over-homogenised city where the idea of  having a “creative” district such as Montmatre back in the XIX century is mere longing. Where do foreign creative individuals looking for a bursting environment filled with opportunities, professionals & collectives go? Not Paris, and the rest of the European cities are gladly absorbing this talent.

Despite being Europe’s biggest city economy and still considered one of the most politically influential metropolis in continental Europe (well, they keep telling themselves they are) the care & affection towards the artists has become too institutionalized, to weighted up by the local authorities, too controlled by the industry, and this can never be of any good for local expressionism.

END_OF_DOCUMENT_TOKEN_TO_BE_REPLACED Yay! London finally got what many other European capitals have a couple of weeks ago…. a public bike rental programme…. although maybe we should consider it the largest piece of corporate branding in London….

END_OF_DOCUMENT_TOKEN_TO_BE_REPLACED

We’re not lucky enough to have someone reviewing the cultural panorama in Berlin. We know it’s probably the most exciting city in Europe right now (and for the past 5-10 years)… having ousted London as a trend pole and underground hub for more than one reason quite a while ago. But at least if we don’t get to go to Berlin, the city comes to us!

From next Tuesday and for a week our new favorite Parisian digital hub (La Gaite Lyrique) will be offering a wise selection of events from Berlin-born / Berlin-based artists. Yep, La Gaite is declaring its love for the German city by bringing to the “bobo” city this unique program.

(Totally Wired, one of the projected films)

If you’ve ever been to Berlin then you’ll agree that it has quite a lot to offer. Being not such a big city (has about the same population as Madrid) the fairly modern hub is a mix of heritage, explosive experimentation and rich dynamics. No-one living in Berlin is a Berliner (pretty much like in London), even if some of them pretend to, that’s certainly one of it’s main attractions. So many Spaniards, so many Turkish, so many Scandinavians…

For 5 days there will be a big number of concerts, installations, exhibitions, workshops, projections… 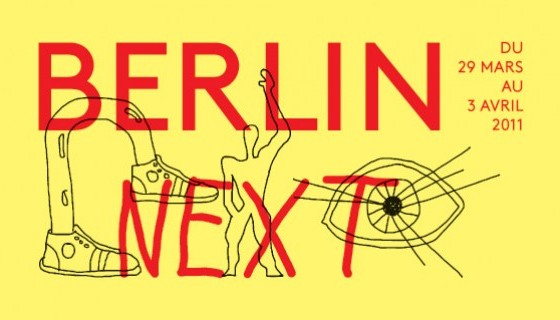 Beacon City of the international underground, meeting point for the world’s free spirits and non-conformists, crossroads of the avant-gardes and counter-culturists, Berlin has managed to maintain and re-invent its attraction and its potential to fascinate the new generation of artists and creators. From post-punk to techno, experimental cinema to the explosion of the digital arts, the esthetics and the disciplines have evolved. But the singular freedom and energy pulsating in Berlin’s spirit turn this “poor and sexy” city into the inimitable capital of artistic creation.

It is this European capital of the 2010s that Berlin Next! wants to talk about, far from the low-cost clubbing and Ostalgie’s hackneyed clichés, by inviting, in their great diversity, emerging or established artists from the current Berlin scene, but also the most passionate of these visual artists, journalists, writers.

We honestly think it’s quite a unique occasion for many of you to discover or review the essence of Panorama, Kreuzberg and minimal (oops isn’t all that the same shit? mmmmm, yep, but you would love it anyway). Some of the events are free (so no excuse) and many others go from 3€ to 24€, more info and full program on their page.