On walking into [ space ] in the East London borough of Hackney, it’s clear that Dean Blunt’s Brixton 28s exhibition isn’t here to make things comfortable. There’s a homeless looking white man lounging on the floor, next to a brown mannequin dumped in the middle of the gallery and dwarfed by a giant misspelling of the luxury brand, Moschino, on the far wall. The aforementioned human is sporting the classic ‘dumpster chic’ of a predominantly white art audience here tonight, in contrast with the leather motorcycle jacket and Nike accessories of his synthetic counterpart, a bottle of Moët & Chandon smashed across its head. The man doesn’t stay long before getting up and casually walking away and it’s unclear as to whether he’s actually part of the exhibition or just a badly mannered loafer taken to lying on gallery floors. Nevertheless, the juxtaposition is striking.

A handful of early arrivals linger among the sparsely endowed space to mumble awkwardly evasive hypotheses of the meaning of the exhibition, drinking 50p beers and chattering about the elusive personality of Blunt who, unsurprisingly, is not present tonight. That’s all rather than confronting the blatant implications of the work at hand; blatant, that is, for anyone familiar with the sociocultural context and local vernacular of the once notoriously crime-ridden, since gentrified, area of Brixton in South London. 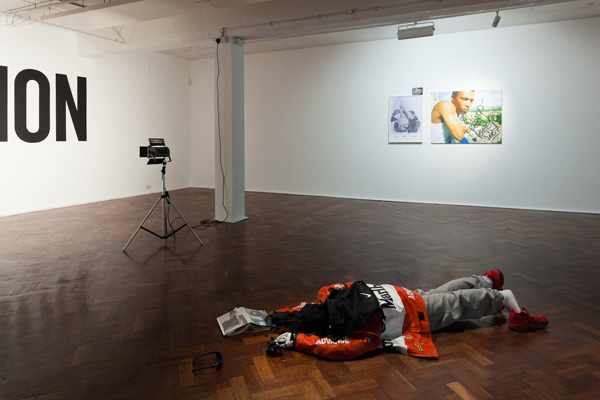 The 28s, a gang centred around the borough’s Angell Town and noted for rearing the notorious Qozo ‘Quincy’ Medici, plays the backdrop to a clear theme of black cultural appropriation by a white population. This in itself is hardly a new idea but still a relevant one as it affects the lives of people living in these areas, rapidly overrun by a grit-seeking Middle; a bourgeois creative class after cheap housing and a sense of cultural ‘authenticity’. Since moving to Berlin and then Lisbon, Blunt has doubtless been struck by the changes to an area once deemed too dangerous for cabs to enter. The same has happened with Brixton, which is why the chosen location of this exhibition, in a centre of this aforementioned urban neocolonialism, is so significant. It’s as if Dean Blunt, himself a British black man from Hackney, is reinhabiting the art gallery, perceived as an elitist garrison against the local populace it is effectively excluding and pushing out.

Accompanying the exhibit is a blurb littered with the urban slang that would be impenetrable to a person outside of the community it references, listing past and present members of the old and Younger 28s, which is likely lost on the audience tonight. On one wall there’s an enlarged canvas print of a signed photograph by hip-hop artist Asher D. An original member of one of the first outfits of its kind to find crossover success in the UK, So Solid Crew, he’s seen leaning over an estate balcony in a singlet. These allusions are further charged by African-American writer Greg Tate’s book Everything But the Burden: What White People Are Taking from Black Culture held by the collapsed dummy in the centre of the room.

The literature is a late addition to the exhibition, along with a DVD of All Dogs Go to Heaven –a reference to a track from Blunt’s upcoming The Redeemer record –propped on the frame of an amateurish sketch depicting a seemingly shady transaction, drawn on the back of a poster. On the opposite wall there’s a projection of a man doing lower back extensions, on loop, and reflected by the very same mirror that featured on an early press image titled ‘Dean Blunt, ‘Play your position #1’, where, instead of a projection, the words “Seal’s Greatest Hits” were scrawled backwards across it in crayon, to be reflected back on the gallery wall.

Blunt is ever the type to frustrate and confuse his audience, which is why the gallery staff is apparently instructed to conceal and deny a surprise performance set for later in the night, only for aspiring performer JStar Valentine to appear for a live rendition of Blunt’s ‘The Narcissist’. His a capella version of the track first appeared on YouTube in 2012 and tonight he’s wearing the same outfit as the mannequin with the black Nike cap, in contrast with the identical, though white, design worn by an equally pale dummy head, titled ‘WHITEBOY’ in the electronic press folder.

Leaving the exhibition, there are leaflets featuring nothing but the image of two heads, side-by-side, in profile and each captioned by the words, “Fade” and “Whitewalls”. The connotations, like ideas of fast-disappearing communities, endless cultural imperialism and those quaint cottages dotting the English countryside, flood by. But it seems the answer to the predicament Dean Blunt presents in Brixton 28s lies, not so much in a statement but the question, ‘whose space is this, really?’ **