London’s Jupiter Woods is welcoming Eloïse Bonneviot and Anne de Boer’s permanent installation with a series of events running as part of Art Licks Weekend from October 2 to October 5.

The ongoing, process-based installation, titled The Mycological Twist, will become a permanent fixture in Jupiter Woods’ garden space, changing and growing with the new gallery as it finds its solid ground. The cumulative, dynamic nature of the installation mirrors that of the gallery’s inaugural summer show, Thank You, a deconstructive and deconstructed group exhibition that danced around various media, which in turn danced around itself.

This particular installation comes after the discovery of the gallery garden’s proximity to toxic waste, and the “consequent interest in the cleansing and healing ability of certain types of mushrooms”. The resulting installation shows the growth of nine varieties of the fungus, and will be accompanied by various events throughout the weekend, including a “Shroom Music & Myco_educational_VJ-set” on Thursday, a video premier on Friday, a mushroom brunch and video series presentation on Saturday, and an already booked-out mushroom dinner on Sunday. 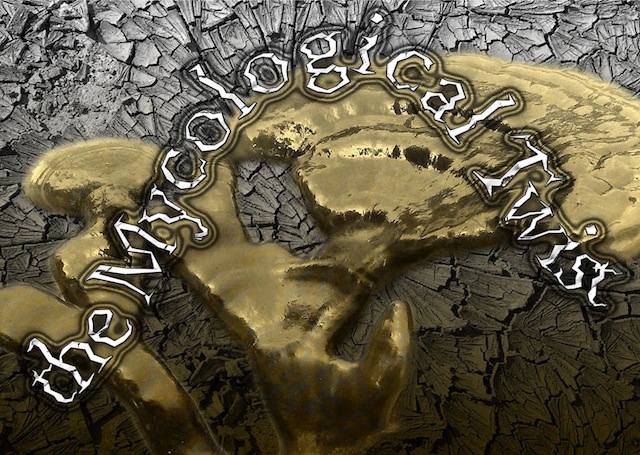 Jupiter Woods is continuing its inaugural and cumulative exhibition, Thank You, with a a one-night-only event called Nail Bar at their London location on August 21.

From 6 to 9pm, the London exhibition, studio and research space will be transformed into a posh nail bar of sorts, organized by Sarah Bradley, who will be creating Jupiter Woods-inspired nail designs at ‘Sarah’s Nails’, and Henry Clarke, who’ll be mixing up two different Jupiter Woods-inspired cocktails at ‘Henry’s Bar’.

Jupiter Woods launched Thank You at the beginning of August, inviting a collection of artists, philosophers and architects integral to the platform’s inception into the space for an ongoing exhibition for the duration of August.

Read a review of Thank You and see the Jupiter Woods FB event page for details. **

It might seem strange to call your inaugural show Thank You – after all, Jupiter Woods has only just started. The south London project space, lead by a team of six curators, has taken the notoriously difficult task of the first show – for which the expectation on any new gallery is usually to present a manifesto – and contorted it into an amorphous rolling programme, subject to any sort of change. They’re not being very specific. Throughout August “artists, architects, philosophers – friends” will contribute to the space – we’re not quite sure how yet. However, the first incarnation features four artists, each working from distinct understandings of how structures manifest in networked and social cultures.

Viktor Timofeev’s ‘N & N’ (2011-2014) greets us on entry, black stencilled sans-serif capital ‘N’s building a structure on the canvas, the weight of the higher capitals weakening those at the base. It’s a buckling architecture formed by a stuck keyboard key, light in precise draftsmanship but heavy in the subtle insinuation of collapse. Eloïse Bonneviot’s ‘Mug Ersatz (performance), The Infernal Design, Phase II’ (2013), part of an ongoing research project into the role of objects in the film Final Destination, is similarly paradoxical. Bottles of different coloured vodka sit on a pale wooden table alongside mugs branded with the 2000 film’s fictional “Mt. Abraham High School”, each of which have been slightly cracked. While the table serves as a hub for conversation and drinking, the compromised cups leak their coloured vodkas out onto the tabletop, staining the wood and marking social trajectories and dynamics through their proximities.

Anne de Boer’s ‘Void Shuffle (int[] array)’ (2014) is an algorithmically-driven video loop. The artist splices a number of found videos – ranging from tutorial videos for programming loop functions to a 3D rendered head – into one minute segments, the play order of which is determined by the shuffle algorithm of the media player. Sæmundur Þór Helgason’s ‘Mediation as such (version 3)’ (2014) is a recursive and self-contained sculpture. A crate filled with laser-cut packing foam serves as the foundation for the construction of the work, as well as the protective enclosure for its transportation. Metal bars protrude from it, creating the stands for a projection screen at one end and a small projector at the other, looping a video representing the construction and purchase of the SD card used to play the video. There’s a sadness in both de Boer and Helgason’s work: a subtle suggestion that hermetic digitality spirals towards recursion. This initial incarnation of Thank You seems to want to dismantle constructions to their component parts so we can better study them. Verging on dissection, the exhibition presents structures at various forms of deconstruction, the suggestion being that once we understand how they function, how they stay alive, and why they collapse, we can start to build something new. There’s an optimism in the context: gratitude is a solid foundation.**

Thank You is a cumulative project running at London’s Jupiter Woods, throughout August, 2014.