Systaime (aka Michaël Borras) is presenting FRENCH TRASH TOUCH in Chicago, as a screening at School of the Art Institute of Chicago (SAIC) on April 5 and a performance at The Archer Beach Haus on April 8.

After the first event at the SAIC Film, Video, New Media, and Animation department on Tuesday, the Friday will include a solo audio-visual set of the work performed by Borras —founder of online art space SPAMM —at the RE:MESH.WWWERK/s night, hosted by Shai_Grl.

The event will be accompanied by karaoke and drag performances by the likes of Kellie Wyatt, Anja Morell, Molly Hewitt and others, while participants are encouraged to get involved by declaring their interest to get on stage before or on the night, with the theme “only sad as fuck depressing songs / slit wrist / lol”.

Online once again bleeds into IRL with S.W.I.M., a three-day event at In De Ruimte in Gent, Belgium that will run from October 2 to October 4.

With no theme or subject in mind, S.W.I.M. sets itself up as a dedication to the internet as a “collective mind”, creating artistic synthesis.

Participating are both national and international artists and musicians that each address the notion of transgression as inspired by the internet, including Andrew Birk, Debora Delmar Corp, Pierre Clement, Systaime, Kim Asendorf and Joachim Coucke, as well as live acts from Coco Haram and Ssaliva, among many others.

The Super Art Modern Museum (SPAMM) takes its work outside the digital realm once again with the SPAMM@Webtics group show, held at Brooklyn’s Wendy’s Subway on September 6.

Curated by the French creator of SPAMM Systaime a.k.a Michaël Borras, as well as Venezuela’s Helena Acosta and Alan Schaffer, the group exhibition explores the influence of the internet on traditional political power structures, and questions what benefit, if any, it has had on the contemporary artist.

With works by over 30 contemporary artists, including Lorna Mills, Claudia Maté, and Beatriz Sánchez, SPAMM@Webtics shows how the modern artist uses the web to “remove the prevalence of a single speech”, showing other ways of communicating and creating. 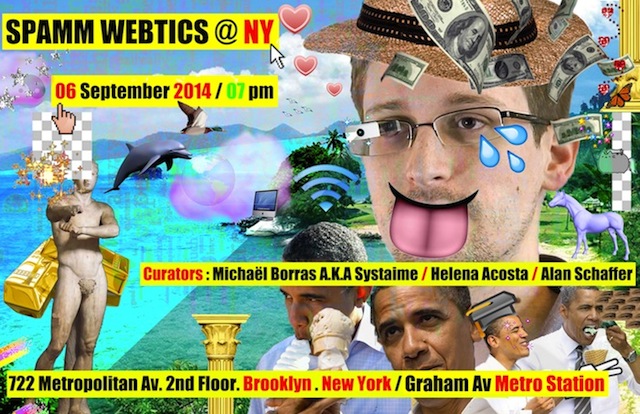 The 2014 International Teletext Art Festival (ITAF2014) will be taking place across various physical and virtual locations from August 14 to September 14.

Once again, the FixC cooperative organises in conjunction with ARD Text, ORF TELETEXT, Swiss Text and ARTE Teletext, to create a festival of teletext-art. Participating in the festival are close to 20 artists, including Michaël Borras aka Systaime, Nadine Arbeiter, Raquel Meyers and Kim Asendorf.

The opening of ITAF2014 also marks the broadcasting of Dragan Espenschied‘s ‘Lucky Cat’, which will be the first artwork presented in the Museum of Teletext Art MUTA.

“The Internet” is no longer just a source to be tapped over and over again, but also a mill that everyone can water. In the context of this ever-draining data supply, appropriation plays a key role and the idea of contingency is more than ever noteworthy, Super Art Modern Museum (SPAMM) a prime example.

Founded by Michaël Borras (aka Systaime) the online space aims to be the foremost showcase of digital arts by regularly inviting curators to display their latest findings, which are both thrilling and right from the heart. What is at stake here is that nothing comes from nothing, as shown by remixes, mash-ups, cut-ups and recontextualised imagery, a recurring motif of World Wide Web visual culture. Our relationship with images has become more complex and these methods place us in the position of both onlooker and maker. Because, in today’s tech-savvy society, cooking up innovation is accessible for many, making for much to grasp and explore.

If you missed the pun, this virtual museum is the purpose of all SUPERlatives. SPAMM is a virtual space where images in movement mingle with freeze frames, from where visitors forage and store, pick up and spark. This project unfolds across practices, from animated GIFs to online performances and “logarithmic frescos” and artists infuse the web with fugacity, aiming for maximum effect in a short time, through the single-minded pursuit of the answer to the question, “how do images kindle our desire?” In order to achieve this, creators employ strategies to keep us tuned in. One of them consists of collecting, cataloguing and transforming cultural artefacts and experiences in order to explore the subconscious and unconscious mind, the uncanny and the unruly, in both high and mostly popular culture, chipping in to things that everyone can relate to. Pop culture, social networks, movies, TV series’ and video games, people and situations encountered in our daily life, are their playground. JK Keller demonstrates this in the video ‘Realigning my thoughts on Jasper Johns’ by sweding Simpsons season 10, episode 19, ‘Mom and Pop Art’. Image and sound are distorted through the misappropriation of software tools, the original video becoming a distant memory. Erica Lapadat-Janzen and her ‘Pizza glitch’ reiterates the hint to Pop Art, reminding us of Andy Warhol eating a hamburger in 1962, while Jakenpopp converts ‘Toxic’ by Britney Spears into chip tune, utilising both the ready-made video clip, as well as his own arsenal of graphics, signs, and symbols, charting toxicity beyond mere words.

In another vein, the chase of technical glitch is one of the blue-chip issues addressed by the artists giving the illusion of a loss of control, while pulling the strings from behind the stage. Sometimes, they manipulate the viewer, foreseeing and conditioning a reaction to interactive artworks that are designed to drive you crazy or include you in the creative process, like in jacksonpollock.org website, as imagined by Miltos Manetas.

After an in-depth visit of the SPAMM, we cannot help but equate it to the first-of-its kind Adobe Museum of Digital Media launched a year earlier, in 2010. The website serves as a real working institution, without any door, nor guard, but curated by Tom Eccles. Paradoxically, the physical and material universe is very present, since the designers chose to figure out the architecture of this imaginary museum in a 3D realistic space, integrated into city landscapes like New York, Tokyo or Venice. As for SPAMM, the exhibitions are renewed on a quarterly basis -the average length in a traditional museum setting -and made available for an unlimited period. But there is a major difference. On the one hand, we are beholders contemplating artworks by a single artist within a virtual but adequate framework, and in the other, we tend to be reduced to web users (however active) consuming a world in flux, based on zapping from one universe to another. After less than an hour of drifting, a slightly dizzying sensation is brought about by eye saturation. Such an experience is a mix of wonder and disgust, a fascination for recycling and relativism facing a format that is sometimes perceived negatively. But the dominant impression is that we are in the presence of euphoric creativity and freshness. Taken in moderation, it is widely joyful and enjoyable.**

Super Modern Art Museum will be launching its Belgian arm, spamm.be, in October alongside Les Transnomades 2013.