Sony seriously have to rethink their gaming strategy (mostly their product roadmaps & launch dates) because Kinect has not only become the hottest developing platform, but also the “coolest” way of making new art. Every new technologist will tell you that, use Kinect, an open source visual code, and you’re set to create the next best thing. 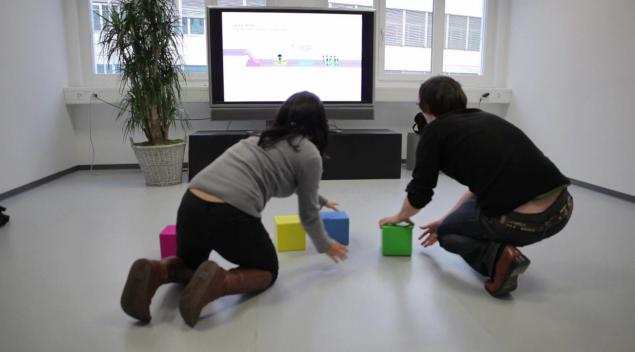 But let’s go back to the main idea here: Geek Run!  A collaborative game (a prototype for now) played with cubes and Xbox’s Kinect controller and developed by Maria Maria Beltran, Emilie Tappolet & Raphaël Munoz, 3 students from HEAD (the Media Design program at the Geneva University of Art and Design) (via).

“By moving cubes on the floor in front of the Kinect, players control different functional elements in the virtual world. The lead character, a geek, follows a series of forking paths; the goal of the game is to help him get to a final destination without getting killed. By placing the cubes in the correct position, the geek avoids the obstacles and/or opens up a new path in the game. As in a choose-your-own-adventure book, your choices open up new possibilities for gameplay”.