Featuring films by Melanie Bonajo, Ann Hirsch and Lora Hristova, the evening will focus thematically on ways of representing intimacy and feminist takes on sex work.

To follow the films at Carroll/Fletcher, there will also be a conversation between Hristova, philosopher Petra van Brabandt —who also contributed to last year’s  TLTRPreß-published Sleep Cures Sleepiness and Stacey Clare, a member of the East London Strippers’ Collective.

Resist the urge to work. That’s the resounding message of the latest Martin Kohout-edited TLTRPreß and 1822-Forum-supported publication Sleep Cures Sleepiness. It’s one that’s been echoed across contemporary discourse, from Gerald Raunig’s Factories of Knowledge, Industries of Creativity (2013) to Maja Cule’s Facing the Same Direction (2014). They’re essentially the product of the realisation that the model of the freelancer, or the artist, is one that’s become the exploitative structural status quo of a post-fordist economy.

“To work is to be”, repeats Petra Van Brabandt as the running mantra of a system of employment that aids in internalising an artist’s work ethic in ‘Laziness Cures Resentment’. It’s probably the strongest and most succinct exposition on the fate of us ‘animal laborans’ of modern economics, as part of a “neo-liberal organisation of labour” where “cheap labour, precarious labour, flexible labour, stupid labour, labour that destroys humankind and the planet, bullshit jobs” keep everyone out of the welfare system and in work at any price.

Van Brabandt’s is a piece that goes across pages 1.1 to 1.6.; each contributor to Sleep Cures Sleepiness having been alphabetically assigned a number in a book that eschews linearity in favour of the most workable collation of contributed pieces. It’s index page numbers 8, 4, 7, 6, 3, 1, 5, 2, and starts at the end with Robert Louis Stevenson’s 1877 argument against “extreme busyness”, ‘An Apology for Idlers’: “it is better to be beggared out of hand by a scapegrace nephew, than daily hag-ridden by a peevish uncle”. The end comes in the second single-digit of Palo Fabuš’ ‘Historical and Contemporary Transformation of Temporality’, when “world time became inseparably connected with globalization; global instantaneity and simultaneity became the norm; distance ceased to be a barrier”.

Interrupting these pieces, and doubling-up the page numbers is Kohout’s #4, where light-grey pop-ups narrate ‘The Memory of Fish’. It’s a rectangular box reserved for ‘Sarah’ and ‘Mathis’ the hyper-connected couple who wait, reply constantly and sleep twice a week “because they scheduled it that way”. They behave much like one does when “going into robot”, as referenced by Angela Mitropolous in ‘Do Androids Dream of Sleeping?’, who identifies the delineation of “the human from machine” as central to the history of the labour movement, while being interrupted by an impotent, hypothetical link to the question, “Have you heard of the International Dark-Sky Association?” It’s a non-profit organisation fighting to preserve the night and combat light pollution. 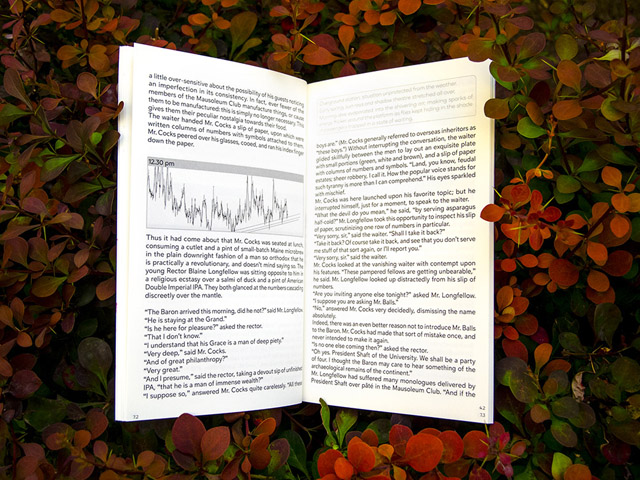 “There is smiling and smiling…” says Sarah’s manager in a Kohout-contributed speech-bubble right before the commencement of an untitled poem by Paul Haworth (“wake the fuck up”) but after an uncredited digression into the definition of the word ‘tide’. It’s an archaic term for time, period or season and “when used on sundials the ‘tides’ were around three hours long, starting with dawn and ending with dusk, the working day divided into these four tides”.

A lower third news slide, that would probably move if it could, announces the false claim that “an hour of massage could compensate for 24 hours of sleep” below Egle Kulbokaite and Carl Palm’s ‘lol on by’ – a song complete with hook, verses and chorus: “mr Tom don’t wake me up before you leave”. Meanwhile, ‘Mr Cock’, ‘Mr Longfellow’ and ‘President Shaft’  exchange pointless pleasantries as stock market graphs go wild between text in Alejandra Salinas and Aaron Bergman’s ‘Idle Arcadian Adventures’ (credited to one ‘B.S Cock’). It’s appended by a note, in the corner of a page and under the circular arrow of the ‘refresh’ symbol: “During sleepless nights we look at our window to the dreamy skyline of Seattle, the original site of the anti-globalization movement, and find no trace of it”. **

Sleep Cures Sleepiness (ed. Martin Kohout) was published by TLTRPreß in May, 2014.