Il est partout! Us Frenchies are lucky enough to have our breakky, lunch and dinner with an omnipresent figure in our daily news…  Sarkozy! I bet only the American or maybe the Chinese presidents are slightly more hungry-media figures to rival the charming powers of Sarko…. OK, maybe Berlusconi too, but he’s about to leave the government so….

He’s been the hyper-president for the past four years, way more active than Mss Merkel and probably the most recognizable figure outside Europe (and inside too, but not on a good way). Inspired by Martin Handford’s Where’s Waldo (Wally, Charlie…) Albert Algoud, Pascal Fioretto & Herlé Quinquis have decided to hide Nicolas behind similar amusing situations to those of Wally.

Sarko with the Roma, Sarko at the Monaco royal wedding; at the Vatican; on Air Sarko One… imagine a place… he’s probably been there.

“Super-Sarko is everywhere, it’s his job after all. He’s even capable of being in several places at once” explain the authors. And now you can try & find him yourself. Published under “l’Opportun” the book can be ordered for 10€, although it’s only shipped within France (boooo). 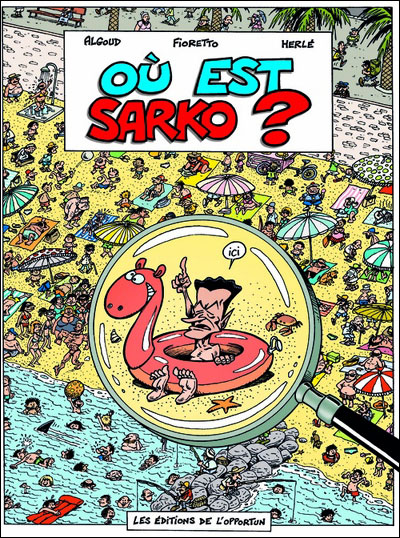