Holly Slingsby‘s Behind the Curtain wraps this Saturday with a conversation with writer and broadcaster Morgan Quaintance at London’s Tintype Gallery tonight, June 12 at 6:30pm.

The London-based artist’s solo show at the Essex gallery comes as part of Tintype Project Space, an annual event that invites an artist to use the gallery as a studio space, followed by an exhibition show. With Behind the Curtain, Slingsby enacts a cross between performance and installation, transforming the gallery’s large windows to the street into a temporary tableaux vivant.

In her performances, Slingsby plays with religious and mythical traditions, using her body like a costumed prop to question our familiarity and reliance on unquestioned tropes and traditions. To wrap up the solo show, she has one final conversation with Quaintance, discussing the inspirations, methods, and ideas that went into Behind the Curtain. 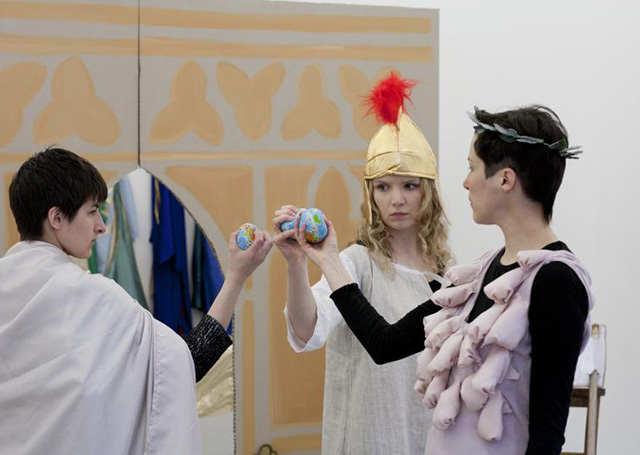 The art world would mostly be preoccupied with the 56th Venice Biennale in the week beginning May 4. Highlights at the prestigious Italian art fair including Burger King Venezia, Pizza Pavilion, The Internet Saga and SUNSCREEN online initiative listed in our short summary here of some things to look out for.

There are still things happening in other parts of the world, including an national election in the UK, along with parties and gatherings to celebrate/commiserate. There are new exhibitions at Arebyte Gallery, Millington|Marriot and Rod Barton, as well as the third in a series of events supporting the Multiverse Spring Residency at Wysing Arts Centre and Morgan Quaintance in conversation with Gery Georgieva around her Solo Romantika exhibition.

Elsewhere, the second of four shows in on for One Thoresby Street‘s S1 series in Nottingham, including writing by Candice Jacobs and Lindsey Mendick, Otto Byström’s Ratchet Shit is on at Helsinki’s Sorbus-galleria, and Amalia Ulman is speaking in Oberlin as part of Storage‘s excellent ongoing programme.

I Want a President @ Trafalgar Square steps, May 6

It’s Our Playground @ Show Room, May 6

Show 2 @One Thoresby Street May 7

The web-browsing rabbit hole is hard to recreate in real space. Nevertheless, in his recent exhibition Pre Owned: Looks Good Man at Cell Project Space, curator Morgan Quaintance does an excellent job at simulating this experience. He imbues the space with a sense of disillusionment, impulse and humour, all the while maintaining an atmosphere of randomness in keeping with the spontaneous pop-ups and endless compulsion that comes along with surfing the WWW.

Cell Project Space, as a venue, works remarkably well with the concept of the exhibition. The Cell logo on the façade of the gallery is capitalised and vertically bisected like a ‘¢’, setting the visitor up for the themes of currency and transaction. The title of the show is derived from an eBay item lot that also served as the starting point: the curator’s personal trawling begun with a denim jacket, embellished with Nicholas Cage’s crudely painted features, on sale for $199.99 and described as “pre owned: ‘looks good man’”.

Another key theme of the show is appropriation and the ease in which material is transferred over the internet. Pre Owned includes looped videos of day time talk show host Kilroy, whose absurd and cringe-worthy show openers add a lightheartedness to the exhibition. The loop was stitched together by YouTube user JGM1138, who’s work is used without permission in the show.

In sourcing what at first resembles a dystopian marketplace, Quaintance walks the increasingly blurry line between collector, curator and auteur. Some of the materials gathered are presented in conjunction, not with artists but with cyber personas. The exhibition opens with a selection of Northern Soul patches (purchased in 2013) from eBay account holder Gary Eastwood. Drawing out a comparison with the objet trouvé and sound print, the adjacent wall showcases Slade graduate Aura Satz’s  ‘Vision Score’ (2012), a perforated sheet designed for a mechanical piano but existing on the wall as a form of geometric abstraction.

‘Carbon Copy’ consists of three manipulated posters –each one purchased from an online source and then overlaid with a description of its condition. According to the press release, Washington was so embarrassed by the racial stereotyping in the movie that he tried to destroy every existing copy; Lawrence’s on-going project uses this internet folklore as inspiration for the series, intended to continually perpetuate the movie’s legacy. The web’s ability to remember is embraced, reminding us of pasts not easily destroyed, while the title plays subtly into the more contemporary web language of our day-to-day life (to ‘cc’ someone in email, after all, is a reference to a typewritten, carbon copied past).

Other included works provide visual allusions to a casual online trawl. Tony Law’s ‘Strolling’ (2012), which gathers looped content of women walking aimlessly, provides a referent to the experience of casually glancing from one set of pixels to the next, observing links without entering. Paradoxically, strolling depicts an era where cell phones, MP3 players and portable devices didn’t exist; where we were less distracted on our daily walks.

Pre Owned examines online consumer transactions as an art in itself. In Quaintance’s words, “People are making work but [do] not want to identify it as such”. Stripped from their original context, the YouTube loops, posters and eBay-purchases take on a new life within the white cube. Such objects, acquired for currency through an online marketplace, become endless fodder for (re-)appropriation. The price paid and when they were bought neglected in order for the materials to become a new form of artistic currency.

Whether or not one agrees with this form of re-presentation, Pre Owned highlights the endless replication of visual imagery on the web. That JGM1138’s ripped YouTube video is used without credit also points to the rapidly depleting notion of copyright. Objects, although replete with their own historical narratives are used as visual material, like paint. Does having not purchased, assembled or asked permission to use Kilroy make its display more problematic than the Northern Soul patches? More importantly, what is the best form of crediting and compensation in the Web 2.0 age? The success of Pre Owned lies in the way the exhibition poses these questions, leaving the answers for us to find elsewhere. **