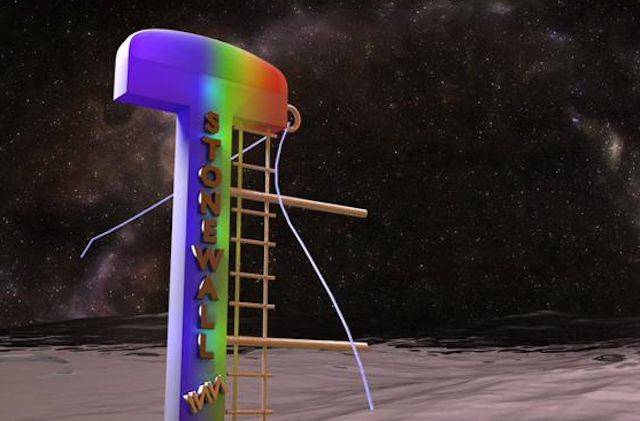 Carpet, in dark hues, line surfaces and walls, ramps mimic isles and give rise to a sunken floor, short corridors and staircases transform spatial orientation and the gross artifice submits to the loud hush of an old-school cinema. The first thing to confront a viewer entering Ryan Trecartin‘s most recent work, curated for KW Institute for Contemporary Art by Ellen Blumenstein and Klaus Biesenbach, is a strong stink of petroleum newness. Some will follow the slim passageway straight into the projection area. Others turn into a dimmed room populated with brown leather “buttkickers” – vibrating recliners in an otherwise empty outer chamber. Around another corner one (re)discovers the reshaped ground floor of KW, Basis, outfitted with an assortment of seating – everything from chaise longues to rows of straight-backed theatre chairs, to collapsible camping stools – facing every direction, extending out into a six-dimensional video installation.

As with Trecartin’s other video works, action shifts and slides to contorted temporalities. Rushing dialogue, rapid cuts, repetition in sound, image and costume translated over a cast of repeat actors and characters appearing as fractal shards across multiple screens. Stunts, CGI effects and graphics, the appearance of morphing animated creatures with the occasional prehistoric screech, reminiscent of Jurassic Park, complicate the multifarious landscapes of the work. The action feels buzzy, it bends over awkward silences and dramatic pauses, contorting time and space.

Following the trajectory of Trecartin’s career and rise to fame, this work continues to push the limitations of what is possible in terms of form and available technologies. This latest move from stereo- to surround-sound marks an experiential shift. Unlike his early videos, which found their way to viewers through the internet, and contrary to his more recent – notably well-funded – video works, consumption of SITE VISIT does not extend beyond the venue. Its site-specificity, its emphasis on multi-channel audio and reliance on split projections means – for now, at least – it can only be viewed inside an institution. And this limitation is reflected in the content. Previous works, like ‘I-Be AREA’ (2007) and ‘CENTER JENNY’ (2013) projected a manic disjunct imagination of the future that felt so much of the time; a science fiction on the threshold acting as cultural forerunner. Entering the space of SITE VISIT, bland-seeming drama with sparse dialogue unfolding over five walls and a ceiling is almost impossible to actually watch. It can rather be heard, sensed, felt, experienced, as if the viewer has crossed the threshold, entered the future and must now embody the work.

Language has always been the quickest way to access the fast-cut editing style of Trecartin, and while the much scantier dialogue of this new work does provide clues, tools through which to enter the piece, it feels rather that this time the language fails. The 30-channel soundtrack comprised of disembodied conversation, 8-bit chiptune synthesiser interludes and out-of-sync dialogue, comes out as initially impenetrable. One skims the surface, the narrative appears straightforward, simplistic, even basic.

Planned as a three-day shoot in an abandoned Messianic Temple, team Trecartin – including creative partner Lizzie Fitch and long-term collaborator Rhett LaRue, among many other ‘Trecartin actors’ – occupied the site, returning again and again over six months. The video begins in the Temple’s abandoned foyer. The cast, which Ryan describes as “characters reduced to generic states that don’t exist”, looks like the cast of an adventure-reality television show. The viewer, so much as the actors, as well as the characters are given the task of exploring the spatial possibilities of the site in which the video is shot. A task that Trecartin described during his public conversation with Biesenbach, as “mapping in 360°”. The dialogue offers flat clues. “I can’t believe someone is paying us to spend a night in this building, it is so easy and cheap.” This, the most obvious access point to the work seems like a cynical in-joke. The whole installation drips of institutional funding; massage chairs that seem to serve no purpose, costumes that reference both militarisation and corporatisation and CGI graphics that appear stuck-on and irrelevant. One might wonder if they are trying to find ways to spend the money.

Though seemingly obvious, such a reading of SITE VISIT misses the mark somewhat. There are more layers to the narrative, and to this new piece than the story of the institutionalisation of an underground artist. Viewers, lounging in comfort, do well when they take their time to appreciate the complexity of sound and image. From no angle in the installation is it possible to watch all screens at once. Entrances into, as well as ways to read and interpret it are infinite and constantly changing. Occasionally or even consistently, a slip of dialogue stands out to iterate the experience of consuming it. “Some of these corners are not the way I’m used to them being”. Even after a third viewing, shift your seat and everything changes. The longer one stays the greater the unfolding of the experience, it is slowly enthralling. If the viewer is willing to put in the time, to submit to the work, they may get swallowed. Much like the cast dropping into the bowels of the building they are exploring: “We’re going to get lost in here.” According to Trecartin, “everybody has their own time-zone”, and in turn, each viewer will have their own way(s) of experiencing the work within it. **