The Paris-based artist works across media to create ‘uncanny scenarios’ and ‘surrealist visuals’ that play a part in an ongoing narrative unfolding through a series of exhibitions and fictional characters. For this show, Pitoiset’s work will revolve around author of The Wizard of Oz Frank Lyman’s “most famous magic trick & window-display.”

The exhibition also includes a text by Pierre-Alexandre Matéos and Charles Teyssou, excerpted below:

“A model of bones and flesh is appearing and reappearing with constantly renewed outfits in a window’s display. Bound. Generate disruption, displacements and attract the eyes, push the on-looker to look again. Look again. Window-dresser is an art, not a fallacious art.”

The fifth Berlin Art Week is taking over the German city this week, running from September 13 to 18 at various locations throughout Berlin.

Over 20 institutional exhibitions, project spaces and private collections will take place alongside various line-ups of screenings, talks and performances as well as art awards.

— A new production by Anne Imhof Angst II: Eröffnung der Ausstellung-als-Oper / Opening of the exhibition-as-opera at the historic hall of Hamburger Banhof.

— A curated selection of work from UdK students at at Galerie Burster.

— Brussel-based collective HC will perform Incident, an intervention for one evening at KUNSTSAELE Berlin.

— Marianne Vlaschits’s *a disturbance travelling through a medium* at DUVE Berlin.

— Jo-ey Tang’s Like An Intruder, The Speaker Removes His Cap, Walking In The Air With His Hands To The Ground at Porcina, Chert, Berlin.

Berlin’s KLEMM’s Gallery will be hosting the Wanton Mobility group exhibition, running at the Kreuzberg space from June 26 to August 9.

The exhibition – curated by Arielle Bier and featuring the works of Alisa Baremboym, Keltie Ferris, Fiona Mackay, Molly Smith and Lisa Williamson –investigates the impacts of consumption and waste in the modern world, playing with combinations of industrial vs. organic matter, and exploring the notion of accountability through cause and effect.

Viktoria Binschtok’s work is a self-avowed investigation into a certain “equivalence toward images”; where documentary war photos and party snapshots have all become par for the course within the algorithmically commensurable space of the Web. The idea that images are, at once, testimonial and interpretation, and thus subject to a kind of relativism, is an elementary concept for photographic theory. It was popularized by Susan Sontag in her 1977 book On Photography, and again a few decades later in Regarding the Pain of Others. By simply framing this concept in the ‘democratizing’ configuration of the internet, little seems gained in terms of conceptual innovation. Aesthetically, however, the outcome proved much more persuasive.

For her solo exhibition, eclipse99 at Berlin’s KLEMM’S, Binschtok inputs her own photographs into a search engine to see what computer-generated equivalents will return. From those results, which she manipulates and reorganises, she creates a dialogical set of photographic installation ‘clusters’ that elaborate the image groupings selected by the machine. 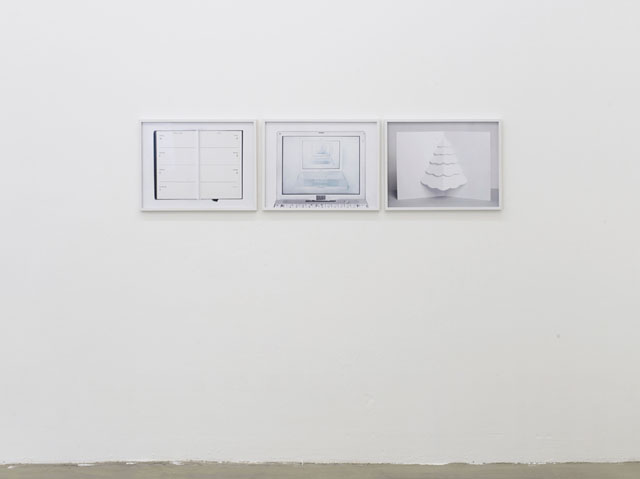 In an otherwise fairly conventional white space, the images are creatively displayed, mounted on thick strokes of black paint or overlapping white wooden boards, some propped haphazardly on the floor or hanging slightly askew. Each cluster is organized by colour and the colour seems to dictate the degree of tidiness. The eponymous ‘eclipse99’ cluster beckons from the far end of the room. The central photograph –apparently an image the artist shot of the final solar eclipse of the last century from which the exhibition takes its title –is an impossible pink, flanked on either side by a glowing airplane window and shiny golden tool accented with the same iridescent colour.

The ‘infinity’ cluster, all in gleaming white, is displayed with type-A precision, the three framed images equally spaced. The content of the images corresponds spatially in this case, through matching horizontal and vertical lines. While colour guides the clusters, there seem to be multiple criteria at work, which could be retroactively catalogued in order to try to comprehend the selection process. But it’s more satisfying to simply absorb the patterns. 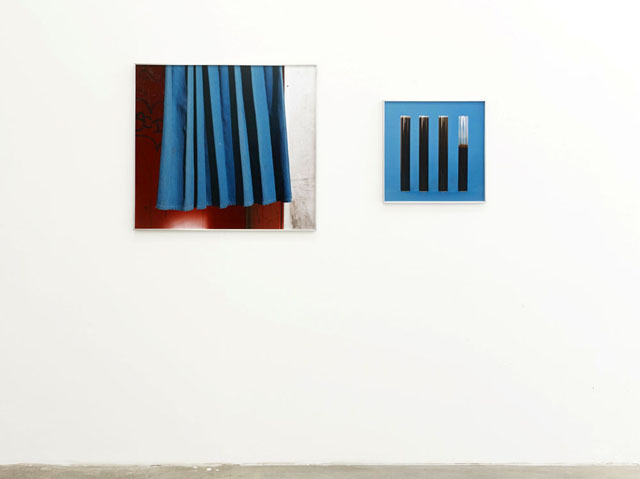 Probably the most synchronous pairing is found directly beside the entrance: the blue curtains of a typical Berlin photo booth, its folds creating dark shadows that merge perfectly with the test tubes of brown liquid in the image next to it. This coupling nicely illustrates the controlled randomness of Binschtok’s methodology. The inherent unity of these otherwise foreign objects comes to the fore in what manages to feel like a fortuitous accident.

Still, Binschtok’s reverence for the ‘rhizomatic’ and ‘non-hierarchical’ function of image use today belies a kind of faith in the digital commons that seems strangely naïve. Given the privatising impulses presently sweeping the internet, even the algorithms generating these image searches (presumably through Google) are not entirely free from corporate interests and controls. It might be fair to wonder whether references to multiplicity and rhizomatic lines of flight (the once emancipatory Deleuzian terminology now fully subsumed by late capitalism) have any political relevance anymore, and certainly whether the internet has any claim to being a space of democratization. **

Viktoria Binschtok’s eclipse99 is running at Berlin’s KLEMM’S until June 9, 2014.