Gulf artist collective GCC is launching its first solo project in Belgium this month with ‘Joint Declaration’, running in the 24H vitrine at NICC from September 9 to November 10.

The group, which takes its name from the Gulf Cooperation Council, is composed of a “delegation” featuring Nanu Al-Hamad, Khalid al Gharaballi, Abdullah Al-Mutairi, Fatima Al Qadiri, Monira Al Qadiri, Aziz Alqatami, Barrak Alzaid and Amal Khalaf, that have been operating on the international circuit since its inaugural Achievements in Swiss Summit at Frieze Art Fair 2013.

The nine artists come together to create an art tableau of current political tensions. A fax machine sits on a regency chair in the NICC vitrine, spewing out communiques from GCC to Brussels: “This diplomatic legal lexicon reveals the barely veiled tension of an EU desire for further economic liberalisation in the Gulf and a resistance to political interference from the envoys from the Gulf Cooperation Council.” 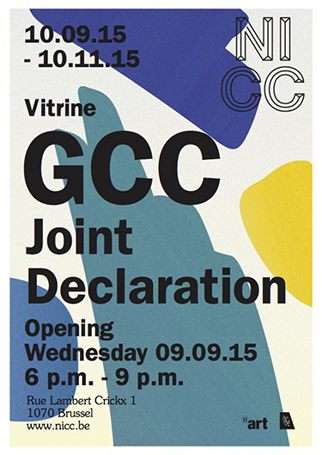