It’s always good to have a good Kickstarter project in the bag… and it seems KS has become not only the crowdfunding defacto platform for emerging artists but also the best way to rediscover legeds. If earlier this year we discovered (the now worldwide famous) Vivian Maier thanks to the persistence of John Maloof and his now priceless negative collection, Jason Landry (from Panopticon Gallery) tries to repeat success formula with an already recognized figure of U.S. photography: Harold Feinstein. 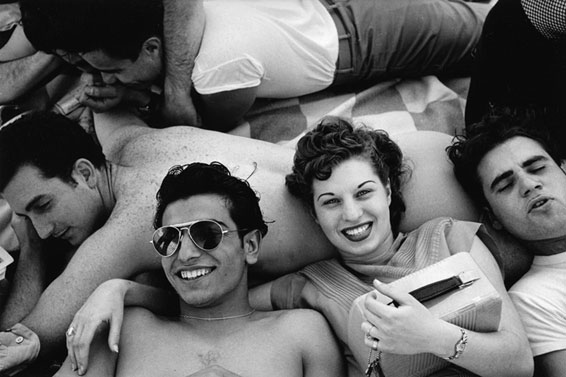 Jason’s project is more about editing & publishing a hardcover retrospective of Harold Feinstein’s most important black & white photographs than discovering a hidden gem. Harold has always been considered a prodigy in the field but it looks like after 60+ years in photography he still doesn’t have a monograph printed of his b&w works.

Harold Feinstein’s photographic career began in 1946. Before the age of 20, Edward Steichen had purchased his work for the permanent collection of the Museum of Modern Art in New York and exhibited it frequently. In the early 1950’s Steichen approached Feinstein and asked if he would like to be included in The Family of Man exhibition. Feinstein, feeling very puritanical said, “Look, a museum is a place where they should just show work because it is art, not because it fits I to a theme.” And with that, withheld this work from the exhibition, changing the course of his photographic history forever.

So as our monthly supported project we highly recommend you help Panopticon, Jason & Co to bring the monograph to life… although we accept the video could have been slightly more appealing Jason… maybe a physical appearance of yourself talking about the project? It’s usually more effective 😉