To celebrate the Montana Shop & Gallery Lisboa 2nd anniversary, Aryz was invited to do an exhibition on the gallery with his process drawings along with a new wall in the city centre…

The shop (which is part and distributes the well-known graffiti brand Montana) had the support of the city council (GAU) that found the shop & artist a nice building side very visible right in the heart of Lisbon. Aryz then started working on Friday night the 2nd of December and ended it the 6th afternoon (btw the mural is along Avenida da Liberdade near the Tivoli theater between Rua Santa Marta and Rua Rodrigues Sampaio).

Born in Palo Alto, California, but has resided in Barcelona since he was a child. In the last few years he has participated in a variety of events and urban art shows in many different countries. As a good new referent in Europe ARYZ’s exhibition @ MontanaLisboa showed for the first time his process sketches for most of is projects, photos of the evening can be seen here.

The best of all is that there’s a parallel individual show also at their Barcelona gallery running until January 21st in case you can’t make it to Lisbon, enjoy!

(photos by Lara Seixo via Stick2target)

After the 2010 edition comes the… 2011 one! One of the best summery street art festivals will once again take place at the southern Italian city of Grottaglie: Fame Fest.

About to be canceled at first, the people @ Studio Cromie have managed however to put together the 4th edition with an always amazing selection of artists, for 2011 Angelo and the crew @ Cromie have brought Vhils, Nespoon, Erica il Cane, NUG, Boris Hoppek…. amongst many others. Quite a selection who’ve been invading Grottaglie and its streets (while eating loads of pizza & pasta) for the past few months to make the city look nice for the big day.

This year it all happens last week of Sept… 23rd & 24th so just like last year… for those of you heading to southern Italy this Sept please pass by Grottaglie, it’s tiny, but there will be so muchart waiting for you…. more details on the FAME webpage. 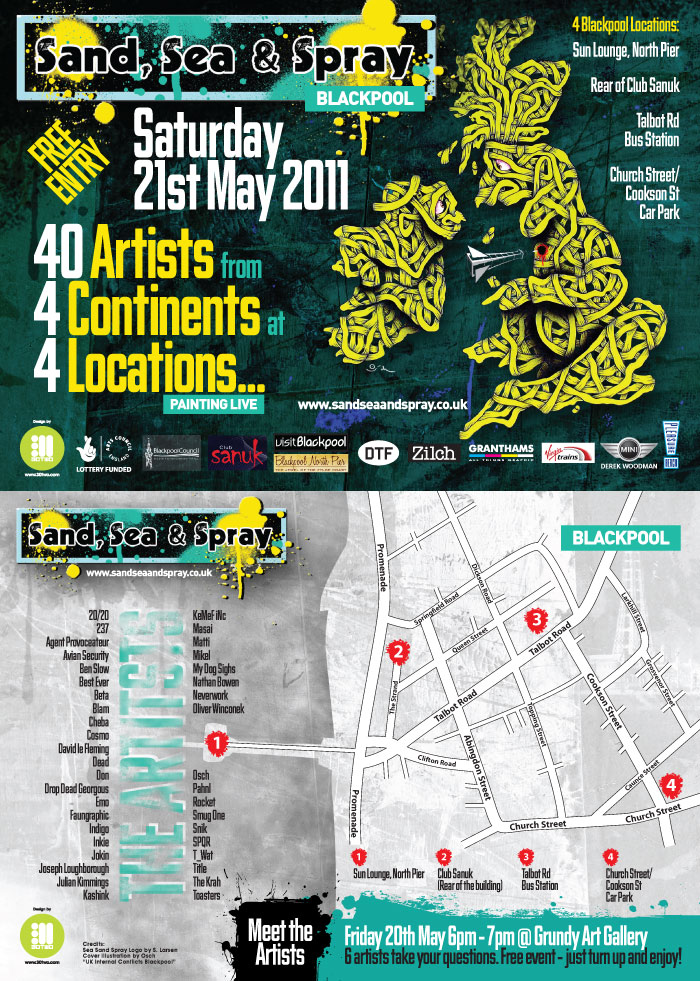 Upfest 2011 has been a big bag of contradictory feelings for me. Taking more space than in previous years the 2011 edition occupied a good bunch of space surrounding Bristol’s Tobacco Factory & North Road. More space, more budget, with their shiny new shop opened last year… and room for many more artists, but…..

…maybe it’s a personal impression but it certainly looked like the quality and variety of previous years has slightly declined. Big names & loyal members of the scene were there (Stik, Dommunism, DM, Snub4…) and many others were missing, but we guess that the bigger & bolder it gets, the more sacrifices the festival has to make.

Constantly looking at the sky for those threatening clouds & despite the muggy weather this year’s edition was once again a nice free gift to our eyes… and everyone’s cameras (along with some great freestyle evening). Bristol is and will still be the Graff city for many years to come in the UK & Europe.

More pics of the event on our flickr page. Enjoy!

To stand out in the crowded graffiti world you have to be either a virtuous (mostly mastering and mixing all techniques), be an old legend, or place your doodles and tags on the most unconceivable places and walls. Patrick Baillet attempts to do all that by bringing his classical pieces to abandoned buildings & squats.

Artist & teacher Baillet has explored a little bit of everything to bring his art to life exploring several trends (hyperrealism, xerox-art…). And his latests photographic works capture many of these hidden classic-graffs on ” espaces palimpsestes”. Currently being exhibited at the central Parisian gallery Lazarew, the exhibition has been extended till the end of August.

We can’t wait for this year’s Upfest (in Bristol) but in the meantime there’s another just as important (mainly because of its big brand sponsors) street arts festival here in London… graff, rap, battles, skate, bmx… (fashion??? what?) a good list of live art  performances @ a very affordable price .. £10 (well, free would have been even better).

Taking over Hearn Street Car Park on 29th May over 10 hours of pure creative process and shows surrounded by a thirsty crowd (all with their DSLR) expecting a lot from the likes of Remi Rough, Toasters, 45RPM (yuzz!), Bandy Lo….  (whole line-up here)…

… as well as a great mix of the dopest artistic showcases with live music from Protein favourite Ghostpoet (keep ’em peeled for a forthcoming Protein Profile film on the man himself), skating and BMXing from Lovenskate, Bicycle Union, and Kingdom on the 32ft in-built ramp… make sure you come for those great graff battles (more info & more videos on their page).