Banner Repeater will be hosting the launch of the 2nd edition of Living in the Future at their London space on July 23, 7-9pm.

The new magazine, edited by Rebecca Bligh and James Hedges and focussed on speculative fiction and future-writing, celebrated its official launch in February.

Featuring a host of contributors in poetry, prose, essays and visuals –including Cécile B. Evans, David Rudnick, Aimee Heinemann and Yuri Pattison –the launch will also bring readings and presentations by a handful of others, including writer Quentin S. Crisp and artist Christina Chalmers. 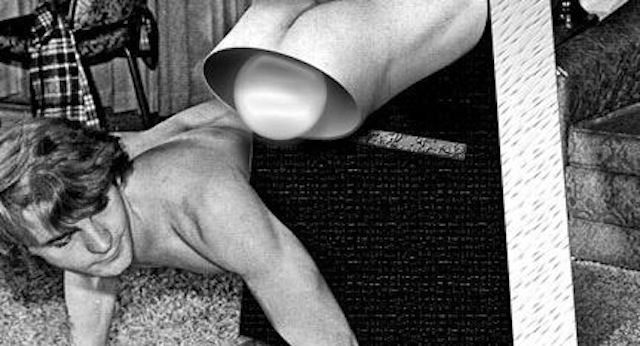 For someone mostly working within the visual format, David Rudnick sure has a way with words. The recordings from our interview span nearly three hours and rarely can the spike of a woman’s voice be heard. Instead, there are minutes on end in the rhythmic batter of Rudnick’s as he talks about the “grand gestures of modernism and post-modernism reproduced verbatim inside virtual environments” or the “Greenbergian aura” of Tumblr and Facebook likes. As the recording drifts on, it becomes increasingly obvious that he is a man both entirely within and without the world of which he speaks.

The art history major-cum-graphic designer spent his formative years at Yale, seesawing institutionally between philosophy and studio art and eventually zeroing in on the 15th century Northern Renaissance paintings of Matthias Grünewald. From within the academic rabbit hole, Rudnick started working with a few publications, ultimately founding his own music magazine, VOLUME, for which he bullheadedly insisted on doing the graphic design though he had, at the time, yet to even open Adobe Illustrator. Over the course of the next six years, he taught himself the nuts and bolts of the discipline; and for anyone that has attempted the same, as I have –it is no easy feat.

What Rudnick does now is a far cry from Grünewald’s religious iconography, but those early influences remain salient in his aesthetic: the heavy saturation of the colors, the thorny bleakness threaded with a kind of hopeful mysticism. The modern world of Rudnick and that of Grünewald’s German Renaissance seem to have little in common, and yet looking at the two artists side by side, one feels the same: emotionally dwarfed, surrounded by an otherwordly force, laced with the sticky sin of origin. The weightiness of his aesthetic mirrors the profundity with which Rudnick speaks; his sentences are complex, nuanced. He is aware of surface and recesses alike, of the faces of things and the shadows their depths cast. At times, he speaks in what sound like adages, like the token philosopher in a world of hollow advertisements.

But Rudnick rarely works in advertisement, at least in the traditional sense. He refers to his clients as partners, to producer Evian Christ, for whom he designed the Waterfall EP, released on Tri Angle this year, as a collaborator. He talks about it not as a skill or service that he hires out, but as a creation in which he conspires. At times, it is not even design skills for which he is sought but rather his words, as with the haiku-like billboards he did for Ficciones Typografika. Mirroring the designer-as-author ethos of Jon Sueda’s All Possible Futures, Rudnick’s body of work stands as signal to the future of design.

What’s your perspective on the evolution of the design world, especially as a young designer in the field? What kind of changes and trends have you seen in terms of both conception and production?

David Rudnick: I prefer to answer this question in terms of what I think is the dominant trend or movement occurring right now, the dominant social impact on design, and one that has the greatest footprint. And it is that for the most part now designers that participate in the Western dialogue of what design looks like are producing the work on computers to send to clients as digital files to display and promulgate and permeate around the Internet, and they are receiving their source material from the Internet when they do research. They are looking at files online, and when they are getting feedback criticism and discussing these things, it is also largely taking place in the online medium. That is to say that for people who are engaged in contemporary practice now—and that is true of artists too, to a large extent—this forms a large part of the bedrock upon which our practice is built.

What I see now when I look at Facebook and Twitter is an urban space in the sense that the brain has no choice. It’s been too quick, this transition to the Internet, for us to have created brain structures that can separate a society that exists in virtual space from a society that exists in a physical space. And this is not a real/non-real distinction; to the brain they are both absolutely equally real. The brain interprets Facebook as your environment, and the discourse online as your city; these are the places that you walk but they are segregated from some of the historical ephemera that were unavoidable when you physically walked the streets of your town.

We live in a time of unbelievably aesthetic poverty. We live in a moment of unprecedented human denial that our generation is coming to terms with. We are not being provided with these shared symbols, they do not exist in our midst, we don’t walk among them, and when we talk, we talk in environments that are some of the most politically restrictive in the history of mankind. The look of a Facebook newsfeed is to me a triumph of a kind of fascism that has been removed from violence. There is no threat of genocide on Facebook, but there is also no possibility of dirt or grime, no possibility of change other than that which is sanctioned by the government.

What this changes about design is a sense of conditioning of many young designers where they stop learning about ephemera and start only learning about the channel. They can only see Instagram as a place that exists within the Instagram window, or F as the dialogue box where you put your input in, not realizing something which was the de facto basis for a lot of 20th century political and philosophical thought, which was that all discourse exists within this very ripe, vibrating, pliant and sometimes collapsing space of social interaction, where the wheels on the car that go past you are as visually relevant as the posters you are physically making to try and speak to the people that are in those cars.

Do you have a speculative body of work that is unrealized, from proposals or personal projects? Have you found any trends in what gets picked up and what doesn’t? Does this influence the work you create and how?

The individual identity of any designer or artist is basically composed of anything they’ve ever seen, read, or experienced. You are what you eat in a life-world kind of way. In my practice, there are things which I choose not to share and a lot of the practice for me of working is trying not to look at certain things. I don’t have a Tumblr, I don’t have Instagram, I don’t follow anyone, and I try not to look at visual feeds because they are too many beautiful things and good ideas out there that 1000s of other people are seeing at the same time.

It creates a certain homogenization of style or perspective.

DR: The temptation is there, especially if you were inside a visual medium that is essentially communicative. The temptation for a lot of artists is essentially to start creating gestures that they know will be understood or readily intimated by the viewer and resorting to tried and tested strategies. And this is the same thing inside advertising and design as well.

Basically what the internet is often used for is as a communication blueprint, a kind of logbook of successes that people will then just slavishly copy. And though they may change some of the superficial aesthetic, they’re looking for the essence of a gesture that resonated. Maybe I’m a bit of a romantic about what the possibilities of design could be, but I believe this trend relinquishes the responsibilities on the individual of attempting to either create new gestures or to express things which may not have been previously expressed. To resort to gestures that already exist suggests satisfaction with the world as is.

I have a lot of friends that are artists and have gotten a reputation for being quite aggressively critical of work that I think is quite abjectly self-promotional by basically exploiting a process that we all know has gross political implications. Basically, people that reproduce the misery of today because they know people will vibe off it, because they feel that misery too. But ultimately it is disingenuous, you are not attempting to remove the source of that misery.

But is the role of art to attempt to remove misery or should it necessarily be?

DR: If you ask me, I don’t think art or design exist as discrete things. I certainly don’t think they have rules. I think they are similar strategies that people keep adopting to try to say things and to live certain types of lives. Art is the .zip file of hundreds of thousands of human lives. **