A panel discussion titled ‘The Gun Has No Trigger: Conversations on Resistance in the 21st Century’ is taking place at the Victoria and Albert Museum‘s Gorvy Lecture Theatre today, December 17.

The London theatre will host the discussion, which looks at what resistance means in the 21st century through conversations with a handful of panelists, including artist Kendell Geers, writer and designer Daniël van der Velden of Metahaven, “anarchist anthropologist” and activist David Graeber, curator and art historian Marta Kuzma, and philosopher Nina Power.

The talks examine issues of structural violence, or, as the press release writes, “violence against the imagination and the manufacturing of hopelessness” by the “devastating logics of neoliberalism”, and the role (if any) of art in resistance. 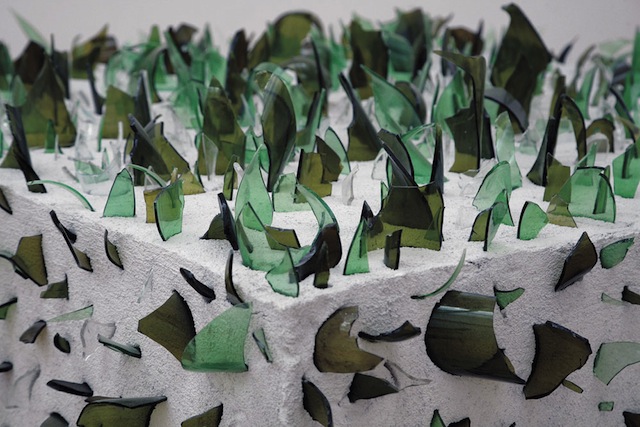 From “transparent camouflage” to Black Transparency, Metahaven take their 2010 Wikileaks re-brand to the next level of “involuntary transparency invoked on organisations and nation-states by whistleblowers and hackers”. As the confidential file-sharing site’s official designers responsible for producing the self-censored scarves sold to raise funds –while dodging direct-donation embargoes courtesy of Visa, Paypal and MasterCard– the Amsterdam-based duo of Vinca Kruk and Daniel van der Velden dig deeper into this geopolitical phenomenon of visibility-via-evasion.

In two-parts and across two locations – with works in Future Gallery’s new location at Keithstraße as well as their old Mansteinstraße space – the exhibition plays forerunner to its published namesake Black Transparency: The Right To Know in the Age of Mass Surveillance (out through Sternberg Press in April 2014) and explores the mercurial nature of modern activism.

Opening a week apart and first held at the Keithstraße 10 space, usually occupied by Import Projects, Black Transparency presents Metahaven’s ongoing collaboration with Conny Groenwegen, a fashion designer situating herself “where inventions in production technology define themselves into new artifacts”. In ‘Data Stitch (Prequel)’ as they call it, a flowing abstract work constructed from cotton scarves, paint and wax visually demonstrates the connection between information and fashion. Similar connections are made in the the Wikileaks series; grey t-shirts with an undulating Wikileaks logo and vibrant silk scarves, both see-through and concealing, line a wall of the gallery space. Somewhere between artwork and advertisement, the products reveal elements of the organisation’s identity while keeping others a mystery.

Across the room several videos are presented on small screens, Skype interviews with notable online activists, academics and politicians. Smári McCarthy, Birgitta Jónsdóttir, Alexa O’Brian, Amelia Andersdotter and Gabrielle Coleman talk to Metahaven about their connection to Pirate Parties International or alternative software practice. The design studio also proposes a new model for data hosting, in the bedouin utopian tent to be seen through the window of Future Gallery’s old Mansteinstaße location.

Having worked with posters as geopolitical board games in the past, in the Berlin gallery space Metahaven present a similar activity in the form of a horizontal map of the ocean; the international water where the Anonymous cargo ship sails with its data, in search of new host: Sealand. A self-proclaimed micronation that became a free port for the internet and occupies a full chapter in Metahaven’s 2010 publication Uncorporate Identity, Metahaven were charged with designing a whole new identity for this anarchist state, in a similar way to what they did with Wikileaks. On the walls above the map, several silk flags hang announcing, “Ask me about transparency” and “Captives of the cloud”, through talking balloons and cartoon-like faces through a cryptic narrative. It asks, “Is the future of the world the future of the Internet?” without offering any concrete answers.

A video manifesto, sharing the Black Transparency title, projects images of current events across the Athens riots and contemporary popular culture. As Metahaven mentions in the press release, “black transparency is not only transparent, but also black”. It sounds like a dark forecast. But Black Transparency on the whole is not so bleak. It’s more a visually striking challenge, or a reminder that all is not what it reveals. **

Black Transparency from metahaven on Vimeo.

Metahaven’s Black Transparency exhibition is on at Berlin’s Future Gallery, running from March 20 to April 19, 2014.