Following this democratic funding trend (although the project started its funding campaign way back in 2009 inspired by other projects such as A Swarm of Angels and Artemis Eternal) is the Spanish big bet for this year is called “The Cosmonaut”.

After many rounds and obstacles we finally have a new trailer and a release date: May 14th.

It looks like the nearly 1Milion € raised on the campaign have been well spent, and to celebrate the team have started this week what they’re calling the K – Program for the project supporters, so we all get to see clips and material prior to the release.

In early April the team will launch what they’re calling “Nayik”, a transmedia experience using Facebook to recreate the communications network that the Russian cosmonauts used in Star City.

At the same time, the new website will be launched and while Andrei, Stas and Yulia begin their adventure in Nayik, you’ll also be able to watch some excerpts of their lives in Star City in the 30 webisodes that we’ll start launching by then.

A list of screenings is also been planned for the release and while only 2 cities have been confirmed as of today, users can ask for a premiere or organise screenings on ther webpage. More info this way.

Nayik and the webisodes will slowly introduce you in the story of The Cosmonaut until the day when the film will finally be released. At that moment the rest of the webisodes will be out, completing our part of this story: The alternative ending, the secret short film The Moon Files, and many more (everything is detailed in The Plan). After this it will be up to you to make use of the Creative Commons license and continue the story.

A few days ago I heard in a TV doc that “success” in our “advanced” modern societies was now measured purely on what we produced. Humans have become production units, as simple as that. As sad as this affirmation may look like, there’s a couple of good things we could deduct in that sentece: a) our behaviours and minds live in a permanent “optimization” state, which is great for the following game: and b) we’re (again) so good at “multitasking” that we’ll find the time to play …. “Factorio”.

Described as “a game about mining resources, planning and building factories, automating production and fighting alien enemies”, Factorio looks like one of the most-promising and optimisation-oriented titles we’ve come across. It’s not only about harvesting super-rare minerals while avoiding massive worms (like in Dune) or playing the always complicated politics’ game (like in Civilization). It’s all about designing the perfect assembly line while fighting other species. Not even Warcraft had that.

The thing is that the Czech team responsible for the game development (with the help of 2D and pixel-artist Albert) have just launched a crowdfunding campaign on IGG to reach a 17K goal and share a polished version of the current Alpha version of the game (which btw will be released next month).

If the funding is complete then we should see a first version with improved graphics by May… so you better share a  or a £ with them. More info this way.

When we interviewed Kickstarter co-founder Yancey Strickler just over a year ago they were already the big elephant in the crowdfunding on-line space. Figures and stats wouldn’t stop growing and projects such as Tik Tok had already raised over half a million $$$ at that time.

Well, yesterday I realized that the number of people in the KS office had more than doubled in a year and then read via ATD that 2 projects had surpassed the $1Million barrier, “the iPhone dock Apple should have manufactured” and an adventure game by gaming studio Double Fine. Who needs investors when you have KS?!

The first, “Elevation Dock” has just 1 day to finish its pledge of £75K, but Casey Hopkins stopped worrying long ago. He now has over $1,2million to fully launch one of the many iPhone accessories that have been funded via KS. The difference about this project is that it doesn’t add a feature to the Apple phone, but solves one of the biggest problems Apple has with its proprietary pin connector: undocking its flagship device.

The second project has more than a month to go, and already has nearly $1,4Million. For what? For an “Adventure game” by some of the biggest game gurus in the industry: Tim Schafer & Ron Gilbert, along with the rest of the crew @ Double Fine.

Both a signature that crowdfunding (and maybe in particular KS) is not only here to stay, but a solid funding alternative to traditional production & funding techniques.

Aaaand it’s finally here! After half a year since they asked us to back up their long-awaited crowdfunded film, the Riot Cinema collective have kindly released the first trailer of the Cosmonaut (you know… that creative commons Spanish movie that’s all over the news).

As proud supporters we honestly can’t wait until the film finally comes to our local cinemas (supposed to be released next year…)… or the internet, or TV because it should be released at the same time on all medias.

And  after having raised nearly half a million € (they’re saying it’s 54% of their goal budget) it seems it’s only a matter of time (and more money) until the project is complete. Just a few more months pipol! 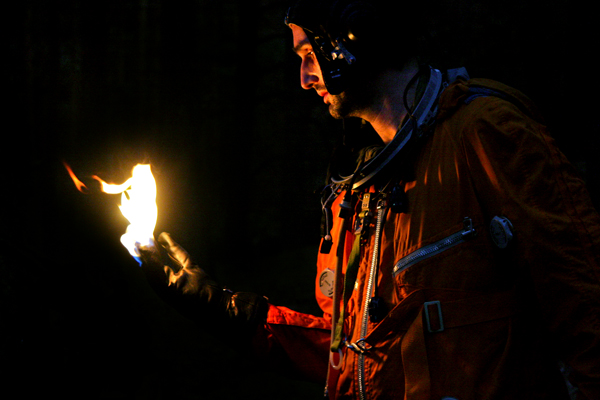 Good ideas “if communicated well, can spread fast and wide”. Good projects if communicated through the correct platform will not only be funded but also generate a wide base of fans willing to virally & freely propagate the essence of the project grabbing at the same time the invaluable attention of the mainstream media.

This is what happened to Diaspora earlier on this year. A project begun by four students at NYU’s Courant Institute who were dreaming of an “open” Facebook alternative (when this one was involved in a big mess of privacy issues). They were hoping to get 10K to start coding their so called “privacy aware, personally controlled, do-it-all distributed open source social network”. In the end thanks to this massive media support (Techcrunch, NYTimes, BBC….) & the anti-fb momentum they managed to raise more than 200K.

Then it came The Pirate Bay documentary earlier this summer… and again, Simon Klose raised twice his set goal. And right now just after this post was published the “TikTok+LunaTik” iPod nano wrist band by Scott Wilson is about to reach a new record for KS…. more than $600k and still 10 days to go… not bad huh?

These are just 3 examples of the several hundreds of projects that a couple of years ago would had probably never found any support & even less monetary funds if it weren’t because of crowdfunding. Today there are all sorts of “social” on-line platforms that allow you to fund pretty much anything… from ONG’s projects, to new start-ups, businesses, album records & so on….

…for the creative bits we have Kickstarter, which we found about at the beginning of this year & we’ve haven’t stopped using to support those wet ideological dreams we found paranormally creative.

The NY-based start-up has helped funding the most bizarre, sometimes genuine, sometimes pointless & most-times amazingly original projects & forms of art expression; like for example building a temporary wedding chapel in Manhattan, converting an old bus into a mobile Thai restaurant, sailing around the world… tons of webcomics, 8-bit videogames, theatre shows, lock-picker kits, …. a long list of unimaginable ideas that showcase the creative spirit of the human being.

Today we’re welcoming co-founder Yancey Strickler who together with Perry Chen structured KS as a tool to fund “only” creative projects, something they defined & created on their own since meeting back in 2005. From the beginning they had this concept where they” wanted to have a very broad definition of creativity and wanted to approach each proposal that came to them with excitement & openness to see what anyone wants to achieve”. Quite an “empathic view of creativity” as Yancey puts himself.

aqnb: Hello Yancey, first of all thanks for dedicating us some of your time, let’s start with our impertinent questions…