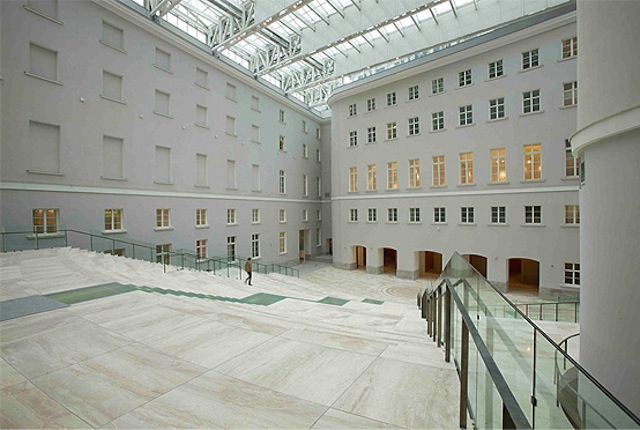 The concrete underground rooms of Berlin’s Alte Münze, accessed through heavy bank vault doors, provide an aesthetically crude backdrop for raw reflections on money and emerging forms of social engagement, both online and off.

With the building and venue name literally translating to “old mint”, it’s a fitting location for an exhibition set to interrogate the insidious relationship between capital and art, the increasingly widespread “capitalisation of the social sphere”, and dispersed and precarious monetary relations giving rise to the so-called ‘creative class’. The conceptually dense Surplus Living exhibition, curated by Elisa R. Linn and Lennart Wolff of km temporaer and London-based poet and writer Harry Burke, features the work of 19 artists and contributions, in a group show tackling the theme from assorted angles, ranging from the acutely literal to abstractly analytical.

Britta Thie’s images of a group of young, pale white models (herself included), lounging nonchalantly, replicate the visual language of advertisements in a starkly banal counter-gesture to some of the more abstract pieces in the show. Hung in the middle of one of the rooms, the women in the photos watch from all angles as visitors circle the outer perimeter, quieting critique with a simple gaze from the commercial ‘other side.’

The collaged, densely packed ink-on-paper scrawls by Ayreen Anastas and Rene Gabri, on the other hand, provided concrete, theoretical reflections on the role of the artist within a capitalist art market. The tiny print of ‘The Meaning of Everything’ (2008) offers innumerable insights, notes and observations about the politics inherent in the production and consumption of art, saturated with references to political theorists like Marx and Lenin and delineated like a cognitive flowchart marked by arrows and equal signs.

The Russian collective of artists, critics, philosophers and writers, Chto Delat?, screened the 37-minute long film ‘Tower’ (2010) from their Songspiel triptych. Mostly set around a boardroom table, with a comically large rotary telephone in the centre, the story is based on real documents of Russian social and political life, as well as an analysis of the conflict that has developed around the planned Okhta Center architectural development in St. Petersburg. The narrative is interspersed with varying political reflections by a chorus of Russian citizens: xenophobic workers concerned with a takeover of migrant labour, bourgeois businesspeople supporting development in the name of a “New Russia,” and revolutionaries calling for a “communist skyscraper!”

The exhibition is broadly divided between these poles. Here, it presents either a tongue-in-cheek reproduction of commercial imagery, construed in an ironic repositioning putting our everyday experience of advertising into stark relief as in Thie’s piece –but also Yngve Holen’s sculptural work ‘Sensitive 2 Detergent’ (2012) and Josephine Meckseper’s video ‘Mall of America’ (2009) –or more academic and researched musings on particular political events and theories.

Constant Dullaart’s ‘Rave Lecture’ performance at the opening managed to playfully merge these positions. Around 10pm the lights in the foyer were turned off and the room was suddenly infused with the loud penetrating beats of Dullaart’s BRIC Mix –a selection of euro house club mixes from the so-called ‘emerging’ economies of Brazil, Russia, India and China. Dullaart’s manifesto ‘Balconism: Balconisation not Balkanisation’ was projected on the wall, set to the pace of the BRIC mix. In a strange juxtaposition, the quickly moving words offered a considered and articulate critique of online proprietary systems and the myth of the Internet –as well as select examples from the outside world, like Zuccotti Park as a locus of privately-owned ‘public space.’

Dullaart’s critique, set in the framework of a highly commercialized, fast-paced Euro disco, reflected the wider aim of the show. To varying degrees, all the contributions to Surplus Living aimed to question the way in which even forms of enjoyment and social interaction (like the rave or the exhibition itself) are sadly permeated with economic and commercial concerns. **

The Surplus Living group exhibition is running at Berlin’s Alte Münze until March 23, with a talk event, Anton Vidokle; Hedi Slimane, on March 18, 2014.