Every year around November we get to know the few lucky (although “few” is usually a generous “few”) selected works who shall be competing for the next edition of the Angouleme festival. For 2013 they’ve been less generous though… only 32 books have been selected to fight in the official category for one of the 4 coveted cats (aka “Fauves”, Best album, Jury prize, revelation and series).

From Kengo Hanazawa’s horror-manga series “I am a hero” and the self-imagined self-survival mode his depressive main character constantly lives in, to Laurent Maffre’s “Demain Demain” and his half-fiction half-documentary graphic novel, or Charles Burns’ La Ruche (aka The Hive) which follows his already successful X’ed Out, and the other 29 novels (some of which we’ve already covered here like Paolo Pinocchio or Hereux qui comme), there’s too many good works to choose from.

So who will it be? Well… just 2,5 months and you’ll know. The rest of the selected works can be seen here, and in case you understand French (or simply like the accent) they’ve also just released the detail of next year’s program. 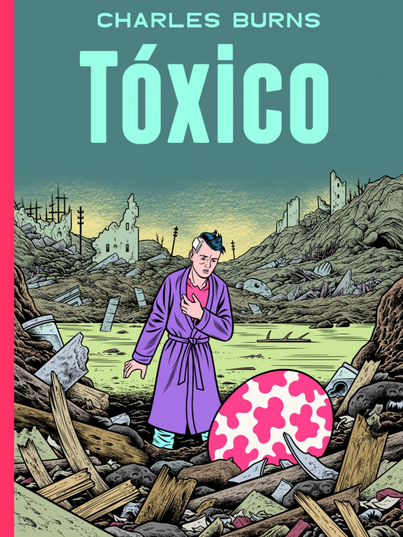 Too much comic lately… but when the color finally invades Charles Burns’ underground world, it’s something we have to talk about with renewed envy.

Tóxico (X’ed out in its English version) recently came out in Spain published under Random House Mondadori (18€… oh wait! Amazon has it for 14$) even if it has been out in the anglophone market for over 5 months now, but you know… Spaniards are very bad with English despite being a market (like many other European ones) invaded with gringo products. Although we shall object that if it’s this kind of product… then we don’t mind being invaded from time to time.

Tóxico has all the key ingredients to become an instant favorite… an endless wormhole filled with perturbing moments, dark horrifying atmospheres … asphyxiating characters and perturbing imagination… nothing new for those who’ve read Burns but this time is a full-colored experience, so the landing promises to be even harder than usual.

The first shocking ingredient from X’ed out is the post-modern Tintin (Doug in this case) who stops consuming certain substances after a break-up and his (suspected) father’s death. In this first volume (out of 3) Doug will be recalling the beginning of his corrosive relationship with Sarah while traveling  in his dreams to William Burroughs’s interzone after his dead cat “Inky” invites him to jump with him through a massive hole in his bedroom’s wall.

Toxic is an tribute to his European influences and in particular Hergé, to the point of identifying the same colouring technique the Belgian master used for Tintin. And beyond many other influences (Lynch, Orson Welles…) Toxic evolves from a parasitic existence to cannibalism as a way of life. 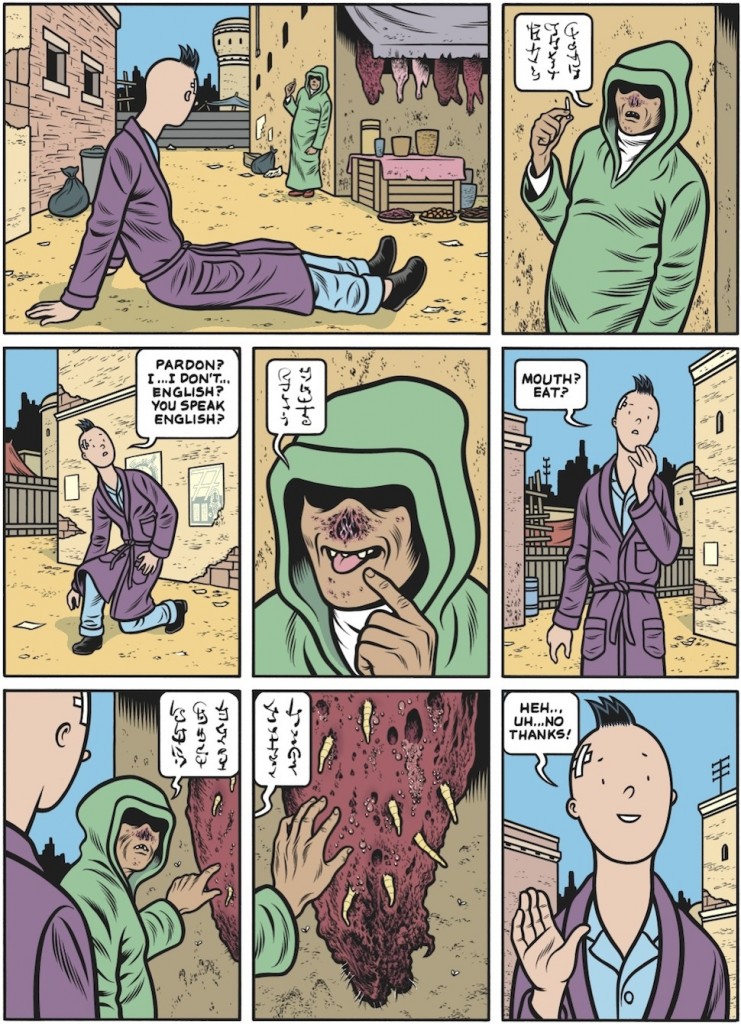 This may sound a bit too creepy, but if you want to stay in wonderland… then we propose you go for  an interview from Sam Adams to Charles Burns from last November. Hope you’ll go for the red mushroom!