I won’t hide I don’t like Björk anymore. At least not like I used to, instead of embracing the DIY trend where new artists create their own instruments/tools to create new sounds, she’s still keen on eccentricities, she’s always been…. well… she’s reached that level where she could ask for a golden toilet and Dali would come out of his graveyard to design one just for her.

Maybe I’m a bit gaga, but in any case here’s her latest egonstrument… one of a series for her upcoming album “Biophilia”. The Gameleste is a hybrid gamelan celeste; the original steel bars of a vintage orchestral celeste were replaced with bronze tonebars hand-made by UK cymbalsmith Matt Nolan, and the instrument was rebuilt and MIDIfied by Iceland’s top organ-maker, Björgvin Tòmasson.

Amongst her other custom-made whims for Biophilia we’ll be able to find four ten-foot pendulum harps, in which the swinging motion plucks the strings and illustrates the songs’ gravitational subject matter. There is also a unique ten-foot pin barrel harp called the Sharpsichord, twin musical tesla coils,” “a hang player and an award-winning 24-piece Icelandic female choir, and the gameleste of course.

Her first single “Crystalline” leaked 3 days ago can now be streamed via SoundCloud and is out from One Little Indian / Nonesuch Records. 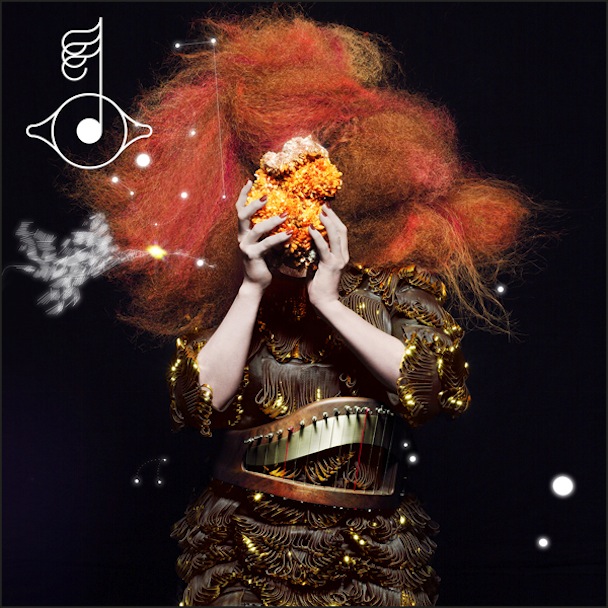 As you can imagine her Biophilia party won’t just be limited to an album, but also a series of iPad apps (one per track), and they’ll all come together in a “mother app” called “Cosmogany”. Although we’re more keen on the 90-min documentary about the album recording process… by Pulse Films.