Good to know MIM continues its steady polishing and coding evolution towards a potential 2012 release. That maybe discussed another day, today we shall give room to Andy‘s latest demo he just uploaded to youtube last Wednesday.

The 6min video shows a  full level playthrough of the Monte Carlo Casino  Heist stage with 2 of the characters:  the Hacker and Pickpocket rushing through all 4 casino floors to get their trophy and scape through the roof…. so we all get an excellent idea of the playability, speed and complexity that awaits us. Imagine much more complex scenarios being played by 4 characters simultaneously… pure joy.

Our  last year interview with Andy this way.

Theft is something inherent to all human beings, something unavoidable, intrinsic to our nature which like many other “dishonest” actions has reached a professionalizing & artistic dimension in our society. You may call it however you want: burglary, piracy, embezzlement, robbery… even “touch”…. and there are as many ways of “unauthorized appropriation” as ways of penalizing it, but which virtuous animal is completely exempt of this behavior?

That’s why theft in any of its forms is highly attractive, and any game which doesn’t include a bit of this or any other immoral activity risks of quickly becoming a not-so-addictive trip. We’re not talking about “accidental” vile takings, nah, we like it when I, you, we know there’s dishonesty behind such action, our intention is accompanied by a mens rea… and we love it. And we enjoy it. 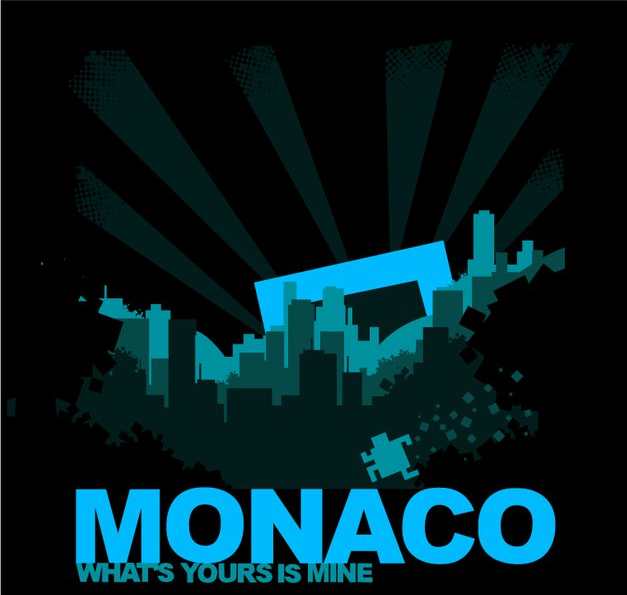 Monaco “what’s yours is mine” won 2010’s Seumas McNally Grand Prize @ the Independent Games Festival, and as if this weren’t enough it also grabbed the Excellence in Design award, a personal project of Pocketwatch games founder Andy Schatz who’s been trying to make of cooperative stealing a piece of art for the past 8 years.

Monaco is one of those petty theft fiscal & gambling paradises where immorality is more than legal, is mandatory. And as such, the game described as “Gauntlet meets Hitman” is all about the risky art of scoring (alone or up to 4 simultaneous players) in this little Mediterranean principality. After all, as we say in Spanish, thief who robs a thief (and everyone knows most people registered in Monaco are somehow “legal thieves”) deserves 100 years of mercy. It looks like this Pocketwatch adventure may be educational too.

aqnb: Hi Andy, first of all thanks for your time… let’s start with the IG industry as a whole… END_OF_DOCUMENT_TOKEN_TO_BE_REPLACED