OnCurating Issue 31: Spheres of Estrangement: Art, Politics and Curating is launching with a party at Motto Berlin on July 23.

The evening includes presentations and introductions by publisher Dorothee Richter  and editor Paul Stewart (on behalf of the editorial team). Penny Rafferty will read from ‘Vampires: Aesthetics to Ethics 1922-to the present day‘ and there will be a performance lecture by Milos Trakilovic.

The issue includes contributions from Joesphine Baker-Heaslip, Jonas Becker, Franco ‘Bifo’ Beradi, Carson Chan, Anke Hennig, and others. It was born out of the Saas-fee summer institute of art and focuses on “estrangement the five editors have applied the thematic approaches from the school back into their own worlds”.

The issue asks “what artistic, architectural and curatorial approaches to estrangement offer current discourse in organisation, aesthetics and activism. The articles unpack estrangement for the political, social and cultural sprint of our time”. 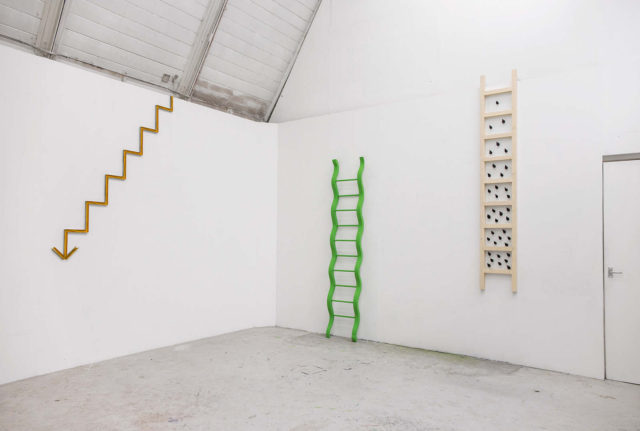 Joesphine Baker-Heaslip, ‘Let it all come down’ (2016). Installation view. Courtesy the artist.

This is the Same Ocean brings editor Samuel J. Davison back together with Melbourne-based print studio Dawn Press for a collaborative risograph issue that presents the works of five photographers: New York’s Daniel P. Shea and Brian Kanagaki, Melbourne’s Sarah Pannell, and Berlin’s Ina Niehoff, joined by Davison himself. 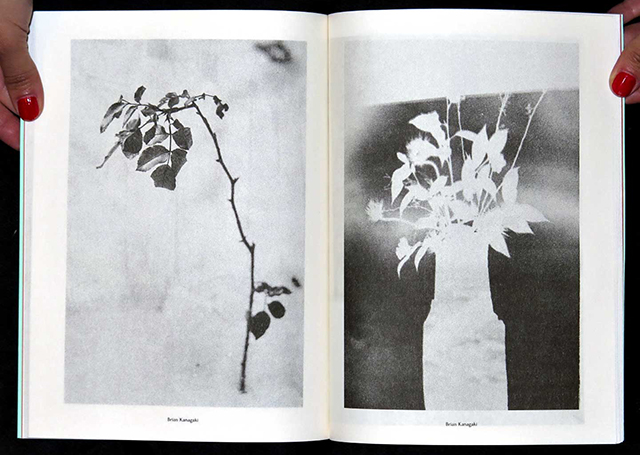 Jan Verwoert is celebrating the launch of his most recent book, COOKIE!, at Berlin’s Motto bookstore on June 6.

The new volume – edited by Vivian Sky Rehberg and Marnie Slater and designed by Nienke Terpsma –is being published by Sternberg Press, in conjunction with the Piet Zwart Institute and the Willem de Kooning Academy. The book comes as a sequel to Verwoert’s latest book, Tell Me What You Want, What You Really, Really Want, and is the third in a series of books published with the Piet Zwart Institute.

In COOKIE!, Verwoert zeroes in on the tragicomedy of making, showing, and critiquing art, showing the hard emotional labour that goes into it, and gesturing towards the culture of “con-artist (like us)”.

“We need to talk about the stick again,” declares Johannes Thumfart in Linear Manual a collection of essays, images, sidebars, “slides and poetry” exploring themes of tools, power, fetish, surface and, of course, sticks. Featuring 13 contributors, “hosted” by Berlin-based artist Martin Kohout and published under his own bespoke TLTRPreß (TooLongToReadPress) publisher, as well as PAF, the book may have been published two years ago but its ideas are no less (if not more) relevant.

Intermittent thumbnails, photos, illustrations of people and animals holding and using twigs, batons, staffs, rods are strewn across the thin, pale-pink covered book –designed by PWR studio’s Rasmus Svensson. Arrows, pointers and cursors direct the eye, one toward the Linear Manual title of the spine, another to an opening quote from Alain Robbe-Grillet’s The Voyeur where its confused protagonist Mathias finds himself pondering an excuse away from his hosts:

“The complete lack of form which presided over the latter’s arrangement prevented the salesman once again from knowing what to do.”

Based on and built around the structure of a conference meeting, Kohout provides the form Mathias’ meal is lacking in the “Morning session”, “Lunch break”, “Afternoon session” and “Tea at five” segments splitting and interjecting the sequential, or ‘linear’, nature of his chosen book format. Paul Pieroni’s text-box antagonisms pop up with the odd haughty comment across “Better ignorant at 47 than self-aware at 30. So STICK AROUND” or “This one’s after some Jagermeister…” and Jo-ey Tang’s series of photocopied pages composed of text revealing “the age of the questioned document… completely dropped”. Tang’s words follow Paul Haworth’s poignant eulogy to a broken heart that unfolds across a bathroom and the subway; emotions in relation to space and infrastructure –“this is my life”.

That’s another echo of the aforementioned Robbe-Grillet quote, as one contemplates Brian Droitcour’s brilliantly deadpan ‘Robots in the Commune’. From the outset it calls out the “hordes of hipsters… fuelling the same corporate giant they’re trying to take down” during #OccupyWallStreet with their iPhones, accompanied by an image of onlookers taking happy snaps of riot police. A familiar Office Assistant icon of a paperclip personified (“You’re computer seems to be turned on”), accompanies the piece as it deconstructs the “totalitarian networks” of word processors and Google search engines and their role in developing and perpetuating ideology through ‘contextual discovery’: “robbie williams naked. Related searches: robbie williams fat”.

Juliette Bonneviot also recreates the monotonous and misleading nature of unreliable online constructions of reality through film stills for ‘La Mort De Lully’ (‘Wikidemia’). Here, the story of Baroque composer Jean-Baptiste de Lully, is told through the non-descript, grayscale CGI form of a male archetype, narrated by white bubble text: “Lully refused to have his toe amputated and the gangrene spread, resulting in his death on 22 March”. It not only illustrates the banality of the network’s malevolence but questions how we allow for things like this happen. Pieroni’s blunt answer comes in one of his forthright interjections: “Convenience FUCKO.”

Dieter Roestraete’s ‘Jena Revisited (Ten Tentative Tenets)’ links what he thinks is the problematic “rhetoric of emancipation through immersion” –where the “idea of the art world starts to eclipse the idea of art” –to the network as well. He uses Caspar David Friedrich’s famous ‘The Wanderer Above the Mists’ as an allegory for the “haze that fills today’s art world”, where, like in Droitcour’s ‘Robots in the Commune’, it exposes the “utopia of mobility”as becoming “a dystopia of absolute immobility”.


Perhaps that’s why the timeless format of the bound book is such an apt one for Linear Manual; it’s segments offering a structure to the multimedia presentation that an actual interactive, multimedia format couldn’t. Yet, while the book form itself perpetuates the arbitrary idea of duration in the imposed structures of the working day, Linear Manual also both mimics and negates the distracted habits of the online browser. Because, while the diversion from Thumfart’s ‘Why We Need to Talk about the Stick Again: A Post-Deconstructivist Meditation’ is encouraged away from the “Animals use Sticks too!” subheading by a ubiquitous arrow pointing toward a 2011 wikipedia entry on the New Caledonian Crow, the extent and breadth of this distraction is still restricted to content curated by Kohout. You may have the option of disregarding it, but it’s still the only content there to disregard.

Meanwhile, the smoothed-edged box of Pieroni’s aphorisms continue to appear as listless distraction alongside and away from Linear Manual’s central pieces. Kohout’s dazzling ‘Sticks: Class A’ series, photographed in collaboration with Rachel de Joode, fashioned and fetishised by bold colour blocks, sport grips and wrist bands against a blue-clouded backdrop are met with Pieroni’s, “I like the look of awkward vegetables on the glass”. There’s fetishisation throughout Linear Manual; of textures, the nine-to-five workday, a chrome draw handle suspended in white space. The complexity and stark beauty of a corporate-like glass railing is set and displayed on its own with a “Four Seasons glass railing available at www.glass-railing.net”, an actual showcase of glass railings for sale online.

Published in 2012 Linear Manual holds up in its interrogation of contemporary technologies, despite a widely held assumption that their progress is advancing at such a rate that softwares can become obsolete within a matter of months, but there are things that don’t change. We’re all still Thumfart’s “animals in human costume”. The lack of distinction is not only illustrated by the New Caledonian Crow’s ability to also use tools like we do but our own persistent exploitation of these tools for “allowing men to treat their fellow men like animals” –whether by stick or by internet. Sadly, there’s been no tool invented for circumventing human nature, as Mathias’ narrator declares within The Voyeur’s confusing and ambiguous time frame: “the meal had no more reason to be over than it had to continue”.**

A new TLTRPreß publication Sleep Cures Sleepiness will be available on May 26, to launch with Martin Kohout’s Gotthard project anniversary at Berlin’s Exile gallery on June 13, 2014.

Following up the release of his definitive RE-ENGINEERING LP on PAN in November last year, Steven Warwick (aka Heatsick) is launching his book Interiors at Motto Berlin, on January 15.

The long-time visual artist and musician presented us with a list some of his favourite artists last year and in counting Rachel Reupke, Katja Novitskova and Hanne Lippard among them one could only speculate on how nuanced and thought-provoking his own publishing effort will be.