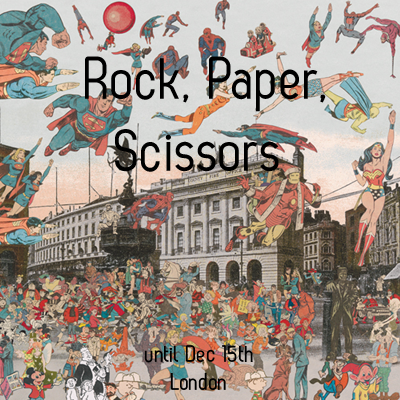 Peter Blake hasn’t had a big exhibition in a while, maybe because he’s been too busy lately with Everything Museums and unapproachable collections. But that’s about to change next week as the very central Waddington Custot Galleries will be opening his first major retrospective exhibition in the UK since 2007.

The Brit pop-art king gets a unique solo show featuring almost 50 new and previously unseen works from the past six decades. The exhibition title takes the idea from the children’s game, and provides a framework for the sections sculpture, works on paper and collage.

Blake’s characteristic collages, found objects compositions with surreal narrative and impossible parades will reappear on the show, even some of his popular characters from his earlier works reappear.

There’s also room for some of his early works on paper which date back to 1948 and are shown alongside Blake’s most recent watercolour, ‘Portrait of Queen Elizabeth II’, commissioned by the Radio Times for the cover of their Diamond Jubilee souvenir issue.  And to top the exhibition his eternally unfinished ‘Drake, land wars in Ireland and Essex’ will make an appearance @ WC, a six-foot-wide canvas, started in 1963 and still a work in progress.