Following the launch of the publication by the same name, the You Are Here: Art After the Internet panel discussion takes place at London’s Institute of Contemporary Arts (ICA) on June 18.

Exploring the influence of the Internet on contemporary art, the panel is led by artist and writer Omar Kholeif (who also curates London’s Whitechapel Gallery) and investigates issues of authenticity and aesthetics as transformed by the new medium. 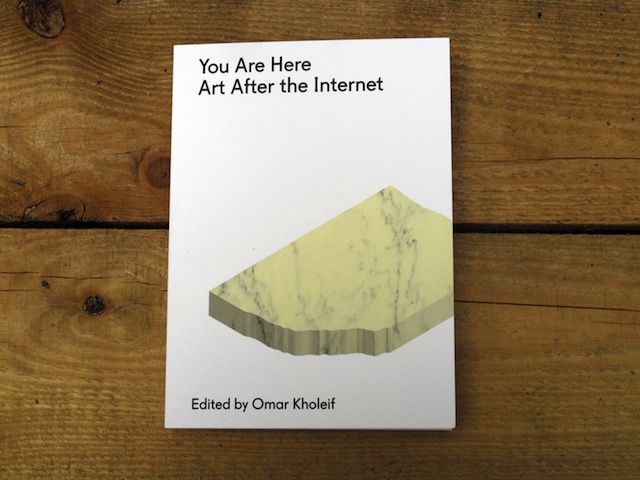 In her ‘Note on Capitalisation’, Stephanie Bailey points to the heart of an issue grappled with throughout You Are Here: Art After the Internet. Concluding the book of essays, provocations and projects, edited by Omar Kholeif and published by Cornerhouse and SPACE, if involves a  discussion of how the editorial team arrived at the decision not to capitalise the word ‘internet’. The question they faced, she points out, was of what kind of space the internet is –sure, in the 90s, as Jennifer Chan observes in the ‘Note’, the dot-com boom had it feeling like a corporate entity divided into commodities: hence the capital ‘I’ (and emphasis on the capital). Since then, our perception of what the internet is –as in where, how and why it exists –has lead to an uncapitalised form being widely preferred. You go on the internet as you would go to the park.

Taking a stroll through this collection of texts that dare to ask the daunting question of how art has changed and is changing, and will change –in the digital age we now inhabit, you come across many renderings of how that public space might look. In the meditation ‘May Amnesia Never Kiss Us On The Mouth’ by Basel Abbas and Ruanne Abou-Rahme it’s an unknowable yet tangible “afterlife of our experiences”, producing spontaneous counter-narratives alongside real word ones, constantly archiving to the second. It’s a space entirely dependent on, and entirely separate from, physical life.

Proponent of Gulf Futurism Sophia Al-Maria sees it more earthily, talking of “terraforming the WWW”, bringing life from a whole new landscape as if giving birth to a second Earth. In her short provocation, she ties up “life” with emotions and relationships. Similarly, in his essay exploring the nature of relationships formed online, Gene McHugh looks at how digital natives perceive no difference between the meaningful context of relationships formed online and IRL. If real emotions can be played out on online platforms, what’s to separate such platforms from ‘life’?

Meanwhile, editor Kholeif brings the book’s central question about art’s new environment home as he explores the potential and actuality of the online realm as a curatorial space. He relays the experience of moving through algorithm-driven “recommendations” in spaces like Amazon and Artsy, and asks whether art that exists on this plane will soon be downloadable to iPads, in a sense crossing a physical boundary.

In his provocation ‘Where to for Public Space?’, Constant Dullaart takes this internet-as-physical-space metaphor for a walk, delineating the unseen and largely uncontemplated differences between ‘public’ and ‘private’ spaces in cities, and drawing attention to the web’s status as a network of privately owned areas masquerading as a wide open public landscape. Touching on the still-murky realms of the deep web and encrypted codes as hidden spaces where art may yet be contained, Dullaart raises uneasy questions about the freedom of movement and information we associate with our digital world. One thing’s certain: “private” ownership means nothing good for your privacy.

When considering this uncertain, tangible-yet-not, interconnected space that determines the shape of life and the creation and distribution (and content) of art, the notion of ‘post-internet’ as a genre becomes practically impossible to grapple with. You Are Here begins to tackle it by observing current trends in art as you might stare at an endlessly rotating 3D gif; there’s not much in the way of answers or definition, but plenty of absorbing examples viewed from a prism of different angles. Take the cross-section of Jon Rafman’s ‘Virtual Worlds’ presented here, excellently chosen shots of his recent ‘I am Alone but Not Lonely’ installation at New York’s Zach Feuer Gallery and stills from his ‘Still Life (Betamale)’ video for Oneohtrix Point Never in particular. What both of these projects bring to visual realisation is the point or the boundary at which digital reality sits alongside the physical, providing something very real and engrossing that acts as a counterpoint to the decay and depression that surrounds it.

With visual interjections like these, the form of the book reflects the volatility and dynamism of the subject matter elegantly, always implicitly asking the question of what our post-internet world means to publications and consumption of information, as much as art. Jesse Darling’s ‘Post-Whatever #usermilitia’ kicks off with a Facebook status and a hashtag before even drawing a breath for its first sentence: this strikes up an instant familiarity with a reader whose reading experience is augmented by half-hourly Twitter-scrolling. The voice is that of a digital orator, strong from the offset and wittily contained. Embracing change as inevitable and technology as human, Darling asserts: “It seems unlikely that the contemporary condition should be qualitatively different from other technological and teleological shifts in human history. Current anxiety that the internet may be making us stupid (or lonely, or sexually aberrant, or socially dysfunctional) echo Plato’s worry that the widespread practice of writing would destroy oral literacy and the ability to create new memories.” This is a mindset that feels like a crux of the whole book, tying in neatly with Rafman’s depictions of un-lonely aloneness and McHugh’s assertion that real emotional bonds can be (and are) forged over the internet.

To quote Bailey again, she states in her provocation ‘OurSpace: Take The Net In Your Hands’: “as the internet continues to evolve, it might be worth admitting that its so-called ‘age’ is not yet ‘post-’ because it has only just begun. Its future therefore remains, to some extent at least, in our hands.” And so we find ourselves here, wherever here might be, inside the ‘after’ signified by ‘post-internet’. If you need a hand navigating, You Are Here maps the movement as diligently as you could expect to map a movement still in motion. **

You Are Here: Art After the Internet, edited by Omar Kholeif, was published by Cornerhouse and SPACE in April, 2014.