Generation Y has probably never heard of Ralph Bakshi, one of the big names in American alternative animation who produced some not-that well known classics in the 70s amd 80s, like Wizards or even adapting Crumb’s Fritz the Cat.

Many of his animated films can be found on that other parallel youtube universe where films are split in episodes and international accounts, but that’s another story. The important bit today is that Ralph Bakshi is back to work, or at least he’s willing to do some new animated series…. the “Last Days of Coney Island“.

He just recently created a crowdfunding page on KS to raise some $$ for the first part of a series… an animated cop, mafia, horror movie set in the 1960s in Coney Island, with political overtones both realistic and outrageous. The stories would take place on and around Coney’s garish, freaky midways and in it’s dark alleyways. They discuss America: Kennedy’s assassination, the mafia, Bobby Dylan, Vietnam, Dick Tracy, Miss America, and a large etc.

$165K is a rather ambitious goal… but taking into account the history and relevance of Bakshi’s works we thought he may well need some good attention and support to reach that figure, and you could be interested in grabbing one of the many original drawings. More info this way.

We’re giving you too short notice but there’s still just over a week left for you to crawl into Liverpool St tube station (Westbound central line platform) and discover one of the popular CBS advertising space takeovers (remember Smile for London?).

The midnight crawlers from Art Below have been taking over public underground spaces for 5 years now and this month they’re carrying the art of Nasser Azam not only to Liverpool St Station but also to the Tokyo metro. “Thousands of commuters will be confronted and refreshed by a diametrically opposed scene: the frozen and desolate wastes of Antarctica and one struggling dedicated artist – a dot in the huge icy canvas – the extraordinary Nasser Azam.”

Previously artist in residence at London’s County Hall Gallery, and creator of the critically-acclaimed ‘Anatomica’ exhibition; in July 2008 Azam completed two triptychs in zero gravity, done as a homage to the artist Francis Bacon.

And last year (February), accompanied by a camera crew, Azam further pushed back the boundaries of his comfort zone to draw inspiration from the frozen tundra of Antarctica where he endured extreme weather conditions to produce a series of large abstract oil paintings.

Azam commented “I wanted to expose the desolate, silent, spacious and empty environment of the South Pole in probably the most crowded, hectic, busy and noisy space in the world”.

Accompanying the poster display on the Liverpool Street station platform, Art in Motion have also taken over one of those CBS massive projectors piloting an international video link enabling London’s travelers to view the Tokyo platform – the poster display and all the public activity going on around it. Playing on the same video loop will be a 2 minute film made in collaboration with Bafta nominated British Film Director Ed Blum. 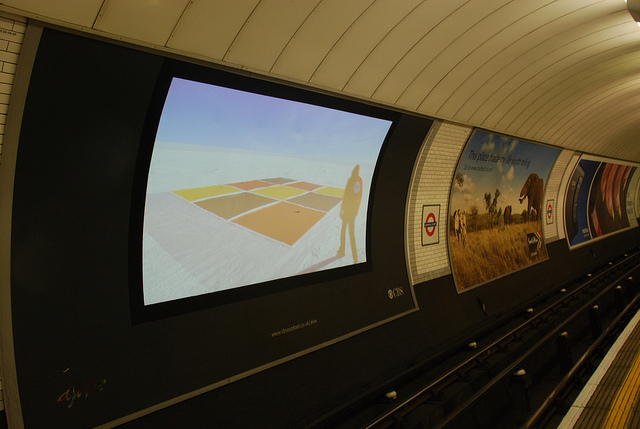 Art Below made the policy decision to persist with this display in Tokyo despite Tsunami, Earthquake and Nuclear fallout. Ben Moore says ‘We did this in the sure conviction that Tokyo’s commuters will appreciate such a diversion from their adversities. Now is not the time to withdraw our custom.’ This will be the third exhibition they have staged in the Tokyo metro. see www.artbelow.org.uk/artists/tokyo

But these are not the only “underground” actions by the Brit collective leaded by Ben Moore, each month they carry out many other invasions you’ve surely seen and throughout April & May many other artists such as “Headism” Phil, Shane Record, Lora Hristova…  So if you have some free time over the coming weeks … you know what to do. Much more info on their page.