Ceremony is certainly an apt title for Anna von Hausswolff‘s latest record. Mostly composed on an organ and charging through the earthly spirituality of a Paganism underscored by a sort of contorted religiosity, the album, out on City Slang Monday, June 17, is a compositional epic wrought with emotion. Hence, the dark liturgy of human sacrifice in this near-nine minute video of ‘Deathbed’, created by sister and fellow performer and visual artist, Maria von Hausswolff, and featuring all manner of natural scenery, blood and insides. It’s a primal expression of an artist that echoes the raw heresy of PJ Harvey and romanticism of Anna Calvi. See the video below and stream the album here. **

I am not a man!/ I am not a woman!/ I am both/ I am neither/ If you don’t like it/ take a breather! So announces Miguel Gutierrez between work outs during his DEEP Aerobics set.  An acronym for Death Electric Emo Protest Aerobics, there’s no doubting the intention of Gutierrez’s celebration of the non-essentialist form and, by extension, the entire oeuvre of The Knife. Performing at London’s Roundhouse in support of the release of their explicitly Third Wave, post-structural opus to feminism gone AWOL, Shaking the Habitual, the Swedish duo give added meaning to the oft-quoted maxim of Gender Trouble author Judith Butler’s, “we are always in drag”.

As a band who’s very image is unclear -an outfit taken to hiding their faces behind masks, conducting interviews only through Skype -it’s no surprise that their second tour in 14 years and five albums would feature an interrogation of performance, authenticity and artifice. Hence, the enveloping ambient opener, cast into darkness and the following confusion of who’s performing what, if at all. 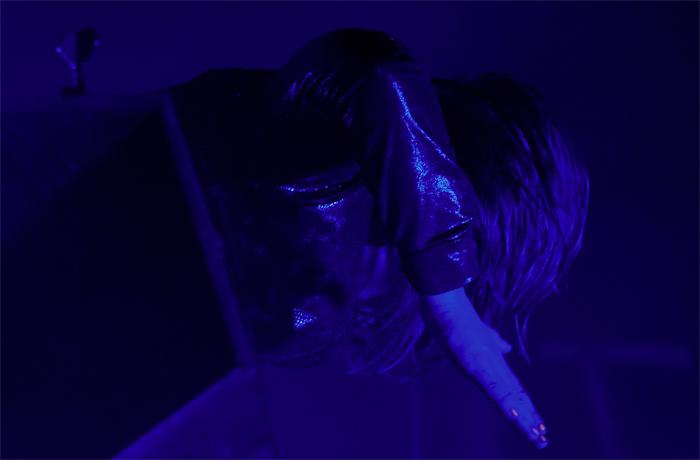 There are several people on stage in brashly glittering gowns and eye make up. The layers come off at times, back on at others –hanging limp on a coat hanger when uninhabited. A bizarrely shaped tuneless guitar is played through a rotating roster of dancers –male, female, ambiguous –while vocals are handled by all, occasionally taking turns in addressing the audience with the odd “hello London!” while Karin Driejer-Andersson’s voice is seemingly channelled through these flesh and bone vessels during songs. The lights go off for the droning ambience of ‘Old Dreams Waiting to be Realised’ and ‘Fracking Fluid Injection’, no staged distraction from the unsettling mood of frustration and urgency that the track generates as a twirling fluoro whistle tube becomes the focus and only light among the shadows. Performers take up drums sticks and pretend to drum, pose and mimic performance, with their silent instruments over a backing track.

Needless to say Dreijer-Andersson and Olof Dreijer are not there. At least not explicitly. It’s hard to say because no one’s wearing a name tag and having never been offered a photo, cross-dressing, wigs and masks make it impossible to distinguish fiction from reality. But then what is reality anyway? As Olof has repeatedly told press, everything’s a performance; pictures can be deceiving and captions misleading.

Depending on your disposition, you could interpret The Knife live as one big hoax perpetuated at the expense of its audience or a brilliant expression of the complexities of human interactions, the redundancy of categorisation and liberation of transcending them. Judging by the shamelessly cavorting crowd, trembling in unison with euphoria, it’s likely they’re of the latter camp. **

The Knife’s Shaking the Habitual is out on Rabid/Brille Records now.

It’s no secret that feminism is a mode of thinking that is extremely close to Swedish electronic duo The Knife‘s heart. So what better day to drop another single and video from their highly anticipated album Shaking the Habitual, out on their own Rabid record label, April 8, than International Women’s Day?

Another brilliantly primal call to arms, buttressed by incredible rhythms, ‘A Tooth For An Eye’ follows their provocatively deviant ‘Full of Fire’ video, directed by feminist director Marit Östberg. But rather than featuring a diverse array of women in every non-conformist guise they could think of, ‘A Tooth For An Eye’ complements the glitchy synth bounce with all sorts of bodies dancing led by a fierce young girl in braids.**