Southbank Centre will be hosting Sounds of Love, an evening of sound-inspired poetry films and live performances, at their London location on July 19.

Sounds of Love is conceived, curated and introduced by Malgorzata Kitowski, the founder and director of PoetryFilm, a living research project exploring the semiotics of the poetry-film genre.

The event is part of the greater Festival of Love (running from June 28 to August 31) as well as the shorter (Ted Hughes-founded) Poetry International (running from July 17 to July 21). 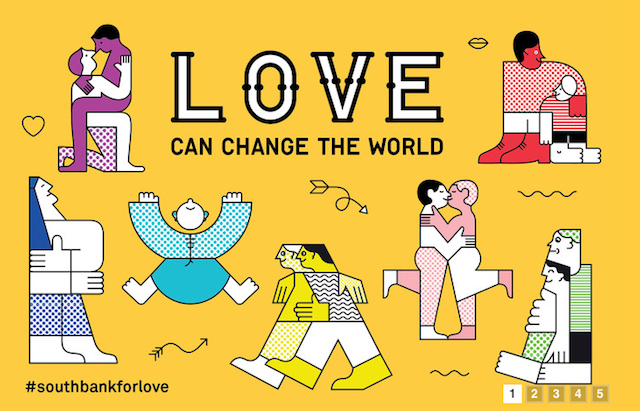 Label-owner of Berlin’s PAN, Bill Kouligas is curating the next Harmonic Series at London Southbank Centre, on February 7.

Like all things good in contemporary art, the experimental electronic music label is taking its roster in an audiovisual direction, after five years as a rather successful brand. They’ll be showcasing live performances by visual and sound artists including Mark Leckey, Florian Hecker, Lee Gamble,  Dave Gaskarth, Jar Moff and Rene Hell but most interestingly, K回IRO collaborator and artist Mat Dryhurst will be presenting an overview of his work.

“Everyone here, turn around and wave to the cameras”, says one of the Guerilla Girls, at the Southbank Centre’s ‘Activism Weekend’ for Meltdown Festival, expressing her joy at being in London, “the trusted partner of the United States in endlessly surveilling its own citizens”. There’s often been a prevailing political thread to the curation of Meltdown –last year’s Antony Hegarty-led line up included the likes of CocoRosie, Marina Abramovic and other iconic women in art –but this will be the first in the event’s 20-year history, featuring talks, panels and workshops, centered around curator Yoko Ono’s programme.

Active social discourse features even more heavily this year than the last, with the likes of Pussy Riot, Guerilla Girls and Peaches being central to the Saturday, a day packed with a sense of urgency and hopelessness, delivered in equal measure, in the face of the magnitude of complex problems presented by a globalised economy.

All official and unofficial platforms are given voice at the cultural institution, as the event is, not so much disrupted, but interjected by a Pet Shop Boys ‘Don’t Play Apartheid’ picket outside a screening of their recently soundtracked Battleship Potemkin of the BFI building and anti-Oil company activists attending panels and questioning panelists on their complicity in helping launder the dubious practices of companies like Shell (a known benefactor of the Southbank Centre). At one point, they hijack the stage of the Queen Elizabeth Hall Front Room to state their case, unmolested by venue security.

Meanwhile, a Guerilla Girls billboard outside the venue’s entrance announces “The World Needs a New Weapon: the Estrogen Bomb”, a sardonic solution to the world’s political problems, in typical delivery by the NYC-formed group, known as “the conscience of the art world”. It’s still an incredibly sexist one, as the two Gorilla-masked veterans, appearing under the women-in-art-appropriated aliases “Frida Kahlo” and “Käthe Kollwitz”, prove by showing the results of their latest “Weeny Count” (a bleak analysis of the disproportionate ratio of man versus woman full frontal nudity and the still dismal representation of women artists in major galleries) since starting out in the 80s. Little has changed.

Entering the Purcell Room and handing out bananas before taking their places at a podium either end of the stage, the duo introduce their audience to an anatomically correct Academy ‘Oscar’ Award, a hilarious history of sexism in the Western world and ludicrously misogynistic quotes from prolific personalities, rhetoricians and politicians throughout time. That, no less, includes Christian Broadcasting mogul Pat Robertson’s conviction that the feminist agenda encourages women to “leave their husbands, kill their children, practice witchcraft, destroy capitalism and become lesbians.” These are all funny from a distance but, in reflecting on the culturally ingrained inequalities ubiquitous on all levels, the Guerrilla Girls speak volumes when they say, “It’s a sad time”.

The launch of the Let’s Start A Pussy Riot book by curators Emily Neu and Jade French –following an earnest, though sometimes rather hopeless, conversation with groundbreaking electro artist Peaches –comes as a surreal and unsettling look toward our dystopian future. Two Pussy Riot members, still “at-large” after the widely publicised February 2012 protest in Moscow led to the arrests of three of their members, make a hitherto unadvertised appearance, in their now iconic balaclavas. Slight frames and faces are hidden under their colour-blocked ensembles, while the risk of emerging so publicly is revealed by brusque security ensuring no one take photos and the women speaking through a vocoder, following a brief address by recently freed member Katya Samutsevich via Skype.

It’s not merely for the gaudiness of their uniform and the queer effects of the two Pussy Riot member’s filtered voices that the whole scene comes across as some sort of surreal pop activism; a caricature of that absurd future that the Guerilla Girls (who are also in the audience, out of disguise and thus unrecognisable) characterised in their speech earlier that day. Orwell’s 1984, Huxley’s Brave New World, or even more specifically, Nabokov’s darkly funny and deeply disturbing Bend Sinister, not only reflect the explicit injustices of a Russian government passing their “anti-gay propaganda law” in St Petersburg shortly after the Pussy Riot arrests but a totalitarian culture of surveillance, worldwide.

But there’s always hope. As a symbol of turning those same weapons of oppression against their oppressors, one of the two women of Pussy Riot picks up a video camera, hidden beside her and pointed at her audience, as she leaves the stage after announcing, “Our issues are the right issues so this is more important than any other kind of fear”. Because as Peaches matter-of-factly says, “there will always be boundaries to push,” one can’t help but be encouraged by the Guerilla Girls’ motto, “complain, complain, complain”. **

It’s an unhinged vulnerability combined with theatricality that makes a performance by Soap & Skin equal parts immersing and supremely uncomfortable. For all its compositional density –spread across an instrumental ensemble, grand piano and laptop –it’s the brooding figure and robust voice of 23-year-old performer Anja Palschg that shakes the Southbank Centre’s Royal Albert Festival Hall to its core.