Leading modern and contemporary art show Art Basel will once again be taking place in Basel and running from July 19 to 22.

The fair will feature over 300 galleries from across the world and over 4,000 various artists, ranging from some of the most famous names in Modern art to recent emerging artists. Some of the galleries and artists featured include Santiago Sierra at KOW, Ana Medieta and Martha Rosler at Galleria Raffaella Cortese, and Waltercio Caldas at Galeria Raquel Arnaud.

With works representing various mediums, including painting, installation, photography, sculpture, and performance, each day of the art show also features a full programme of events, including artist talks, films, and symposiums. 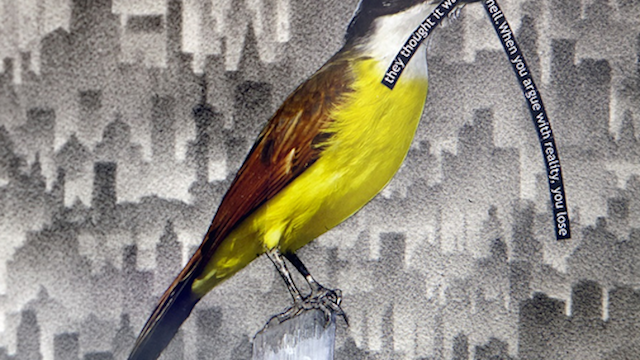 A year ago there was a massive manifestation (and demonstration) of Catholic power @ the Madrilian Cuatrovientos aerodrome… it was the Catholic olympic games, also known as World Youth Day. A perfect ocassion to use Julius Von Bismarck’s “Fulgurator”, a device that while triggered by a flash, enables an image to be projected on an object exactly at the moment when someone else is photographing it. So they decided to project Santiago Sierra’s NO, part of his NO world tour.

Maybe they picked a controversial event, figure and subject, but the action didn’t cause much buzz then… because it only affects the cameras nearby, and the people only realize it once they’ve developed their stills… the few who got the NO must have thought Satan was wondering around that day.

The message-infiltrator-device is already 4 years old, and thanks to the recently-opened Madrilian PHotoEspaña festival Gallery Off Limits  is showcasing the wonders of this machine and the evil soul  these two, hidden among the pilgrims of Paraguay, carry around when not praying.

One lesson learned: watch for fulgurators when attending rockstar events from now on… they could be inserting an arguably desired message (or image) in your flashy images. More photos on the noprojection flickr page.