The Museum of Modern Art in Warsaw will be hosting a film screening event titled ‘Total Body Conditioning’ to coincide with the Private Settings, Art after the Internet group exhibition on December 10.

The event focuses on “the body as an object and a brand”, exploring its representation within the public realm and within contemporary visual culture, and how they, in turn, affect one’s relationship with his/her own body as it continues to be “disciplined by technological mediation on screen”.

The event brings a handful of artists who have in their own ways explored these questions through their video works and films, like Agnieszka Polska and Sarah Abu Abdallah, as well as Kate Cooper, Jesse Darling, Hannah Black, Jennifer Chan, and Bunny Rogers. 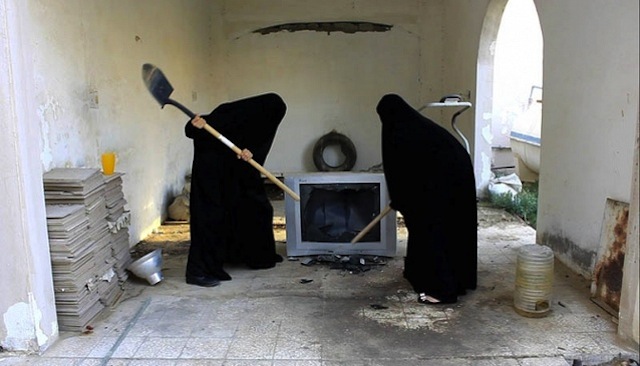 A mammoth survey of some of the world’s most influential emerging and established artists and collectives, Private Settings, Art after the Internet, is happening at the Museum of Modern Art in Warsaw (MOMAW), opening September 25 and running to January 6, 2015.

Curated by the Polish institute’s Natalia Sielewicz, the show press release reads like a search engine optimised article around the dominant art discourse of the last decade. Littered with tag words like “affect”, “authenticity” and “anonymity”; “prosumer”, “late capitalism” and “stock photographs”, the lineup is an equally expansive overview of some of the most relevant contemporary art of the day.

A good handful of its producers include Ed Atkins, Darja Bajagić, CUSS Group and Daniel Keller; Harm van den Dorpel, Loretta Fahrenholz, Metahaven and Yuri Pattison; Hannah Perry, Bunny Rogers, Pamela Rosenkranz and Ryan Trecartin from a roster that is too long to list, for an exhibition (including collateral events) that purports to track a generation born before the turn of the century and brought up on the internet.

It’s another bold attempt at categorising the uncategorisable swell of artists rising from the milieu of online awareness, the same way that the Art Post-Internet exhibition in Beijing earlier this year did with its title’s integrated umbrella-term for ‘kind of a product of the internet but not entirely’ and more nebulous objective, spanning a broader generational cross-section.

Interestingly, the Private Settings sub-heading is identical to that of the Omar Kholeif-edited book You Are Here: Art After the Internet published in April. It’s unclear whether the reference is intended but there is some overlap with contributing artists also featured in the MOMAW exhibition, including Jon Rafman and Jesse Darling, perhaps revealing a consciousness for a shared experience, however incomprehensible that experience might be.