Last Friday took place another well-known film festival… probably one of the most important short film festivals ast this side of the pond: the X edition of Notodo’s filmfest.

The ceremony was streamed on-line, and like every year, as a present we have the possibility to enjoy every single film… not only the selected winners (list this way), but every single of the 168 finalists competing for one of the 15 prizes. Congratulations Ana, congratulations everyone.

It’s taken them a while but Notodo have finally put up the details for the 10th edition of their famous short film festival. And if you’ve been waiting, then you better have prepared a good script for the film you’re about to submit… you have until January 14th for your work to be considered for the big X edition.

A 10th anniversary has to be celebrated (even if for a second we feared they wouldn’t have budget for this year’s edition given the tough times…) and so the jury this year includes the festival founder Javier Fesser or terror series REC director Jaume Balagueró.

The rules & conditions haven’t changed neither…

Basically open to everyone (despite the apparent Spanish-speaking dominance) over 18 who’s willing to submit an original film (never been released before); that can be up to 20 Mb and it cannot last longer than three and a half minutes (including the initial and final screens). This does not mean that the short has to necessarily last 3 min 30 sec; this figure is only the maximum time that it can last. If you go for the Triple Distillation category, it must last exactly 30 seconds, including screens, not one second more or less.

That’s pretty much all you need to know, but there’s a few other details you may be willing to know (on their page), so now it’s up to you… and good luck of course!

Spain doesn’t host or organize such a bombastic film festival as the Vimeo or the Youtube Play one (which both happen to be this month… and some of the videos are nominated for both!!!), in fact no other European country does, but on the other side we have some great independent ones like the Walthamstow Internacional Film Fest in the UK, Festival Des Tres Courts in France, Sedicorto Internacional Film Festival in Italy…. and the Notodofilmfest here in Spain, the most renown on-line festival at this side of the pond.

The new director for this 9th edition will be Daniel Monzón (behind the Goya winning “Celda 211”), but that’s not the only change. This new edition will be giving out more than 77000€ to the winners including courses, scolarships, trips and 9000€ in filming material. New categories & prizes, like the one for LatinAmerican filmmakers or the “Remake” prize which is pretty much very similar to the Vimeo remix category (mixing your favorite films from all times). 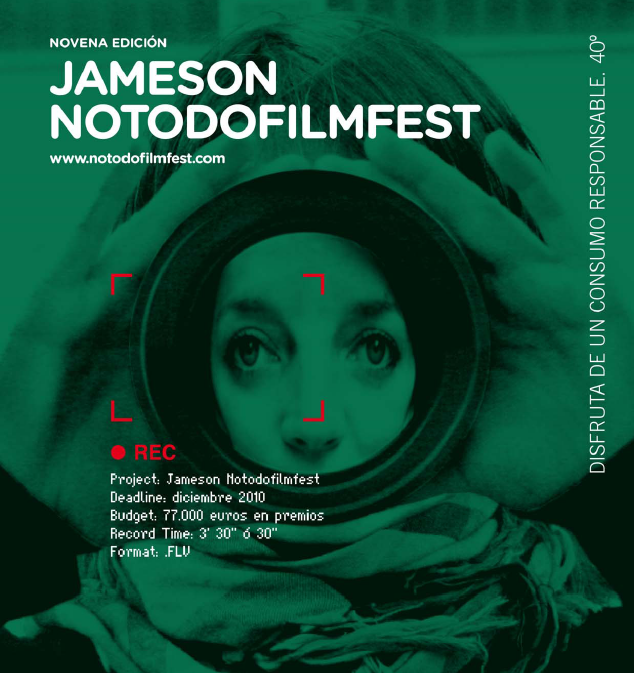 As with many other film festivals if you decide to finally participate (you have until December 21st!!!) you should obviously subbmit an original and never released before film which cannot be a reduced or enlarged version of another short made prior to this festival.

Your film can be up to 20 Mb and it cannot last longer than three and a half minutes, in other words 3 min 30 sec (including the initial and final screens). This does not mean that the short has to necessarily last 3 min 30 sec; this figure is only the maximum time that it can last, but within this margin you choose the most appropriate length for your short. If you submit your short in the Triple Distillation category, it must last exactly 30 seconds, including screens, not one second more or less. And the copy you submit shall be in .flv format measuring 600 píxels wide x 340 píxels high. Oh and of course, anyone can participate regardless of the nationality or language spoken, just make sure your film has English / Spanish subtitles 😉

The same categories & prizes are kept as usual….

There’s also a new category “Si es Calle 13”, the famous horror & adventure 13th Street channel (belonging to the NBC)  will be airing the short that best suits their spirit.

So what r u waiting for? Start submitting you short-films!! Read the rest of the rules here (many shorts have already been submitted, and you can start seeing them on-line right now!!).