Gery Georgieva is bringing her latest solo exhibition, Solo Romantika, to Deptford’s Res. project space, where it will run from April 24 to May 9.

The Bulgarian-born artist’s latest show is a mix of new performance, sound and video installation, and forms the second of three solo shows produced by the #temporarycustodians R&D platform (initiated by curator Helen Kaplinsky and artist Maurice Carlin) at Res.

With Solo Romantika, Georgieva gives us her own rendition of emotive folk and pop solos, performing alone in a studio as she lip-syncs and records a cappella versions of sad Bulgarian songs. As a backdrop to the performance, and performative in its own right, is an elaborate layering of references across props, costumes, and script parts.

John Cage was apparently into mushrooms. Not only a composer and pioneer of indeterminate music, he was also a keen amateur mycologist, a branch of biology with its focus on fungi. London-based artists Anne de Boer and Eloïse Bonneviot have found a fascination in the field too, not only cultivating The Mycological Twist installation at London’s Jupiter Woods where the artists are growing their own mushrooms, but composing their own ‘Shroom Music & Myco_educational_VJ-set’ extolling on its benefits. Performing the audiovisual performance-installation from one of the “storage islands” in the “co-working archipelago” of  Apophenia, the duo set a lo-fi projection of saturated images, words and instructions to a playlist that spanned New Age, trance, psychedelia and maybe a bit of funk, at Salford’s Regent Trading Estate on December 6.

That VJ-DJ performance opened a night full of them at a provisional “industrial sculpture and storage park” constructed by artists-in-residence Josephine Callaghan, Susanna Davies-Crook and Gery Georgieva and carved out by equally ephemeral light in the Regent Trading Estate space. Guests invited to perform within the “jumble of assets” inspired by the experience of finding patterns and associations in random data (from which Apophenia takes its name), included de Boer and Bonnevoit, as well as New Noveta and Patchfinder, while Joey Holder contributed three Jacuzzi shells from the artist’s HYDROZOAN exhibition at The Royal Standard in Liverpool.

A DIY fountain made from black bags leaking water and being buffeted by bamboo only to burst on to its audience. A film of an Afghan refugee journey to Greece being intercepted by metal sheets reflecting the film back out into reality. A six-person focus group on ‘independence’ exploring the individual voice and its mass mediation. These are some of the ways the night-long event interrogated the idea of “the way in which our relationship to assets, from property to services and natural resources, is changing in a climate of scarcity”. It’s the first in a series of live events, curated by Helen Kaplinsky and Maurice Carlin of the  #temporarycustodians R&D project, looking to create a “share economy” space among its ‘islands’ of storage.

“Mushrooms, like every sexually reproducing organism on this planet, can generate a limited number of cell division before vitality falters”, Bonnevoit warns in her live and intermittent notes on mycology throughout the ‘Shroom Music & Myco_educational_VJ-set’. That’s followed by the swelling, bulging and throbbing time-lapse imagery of fungi growing and reproducing, while a woman’s voice sings, “why don’t you lay your head back, open your lips and take a sip” over a tune that can only be described as ‘groovy’. It’s an un-Googleable song called ‘Fourth Dimensional’ by Aquafur, taken from what de Boer calls a “chillwave/psybient/triphop” compilation CD. Its jerky “fourth-dimensional, super-expressional, soul-continual, verging on criminal” refrain prefaces an eventual shift in mood, from awkwardly sexy ‘funkwave’ to angry industrial, as Bonnevoit puts out the appeal, “I strongly believe that the future health of the planet may well depend on the strains we preserve this century”. **

#temporarycustodians’ Apophenia event was on at Salford’s Regent Trading Estate on December 6, 2014.

Maurice Carlin’s Performance Publishing happens live, in front of an audience that can at anytime be made up of online spectators, selected writers, or visitors to a former furniture warehouse based in Salford, Greater Manchester. Slowly but surely the artist spreads CYMK paints, associated with the colours used in newspaper printing, with a weggee, across thick pieces of paper, laid out on an industrial floor. Peppered with characterful cracks and pale colours, the prints bring to mind Abstract Expressionism in their aesthetic but in truth are a very real documentation of the space in which they were created. Side by side, mapped out across the huge floor, they make up a pattern across the space, which reveals subtle variation, as well as the possibilities such a space can offer an artist.

Travelling into Salford, the site of derelict buildings meets you head on. And it’s inevitable that the context of the performance, in the sense of the scale of the area to work in at the Regent Trading Estate, will play on the mind. Far from the extortionate rents of London, where artists cram into tight spaces, building in floors to accommodate their friends or bedrooms, room for expansive projects is a possibility. Yet, at the same time, this is a totally connected project, accessible from around the world, with a live feedback channel, that gives spectators a chance to comment on the process of production in front of their eyes. In response, Carlin shapes the layout of the work into a triangular ‘v’ that matches the perspective of one of the camera views, while the other peers over his shoulder as he works. 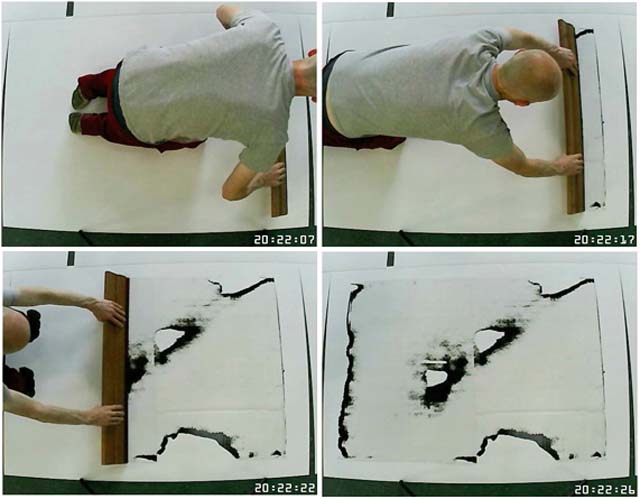 Having already worked on a project titled The Self-Publisher, gathering refuse photocopying from various shops in different cities, stapling them into ready-made zines full of anecdotes, such as exercise routines or CVs, this project carries on that idea of gathering locally-sourced information. It’s a basic publishing production technique but, most importantly for Carlin, it’s also a moment when there is a literal transfer of information.

In ‘Screenscans Havana 14’30’ (2012) Carlin switches on a handheld scanner before moving it slowly back-and-forth over the charged surface of a television screen. The work then produces a single-angled, black and white storyboard, crashing narratives from various channels across the screen, and flattening them into one continuous glitch. In short, Carlin takes an interest in the importance of surfaces, the mechanisms that produce those surfaces, and the way in which we interact with them. In his own work he pushes all of these to the extreme. One of his simplest and most effective demonstrations of this is creating relief prints off street walks for on-looking passers-by.

In Performance Publishing, printing, production and distribution all happen at once. A very close interaction with one surface becomes captured information, disseminated to a global audience, across screens and the artist is brought to life as the medium through which an audience interacts with one and the other.**

Performance Publishing can be seen live online or via appointment at Regent Trading Estate, Salford until till the September 29, 2013.