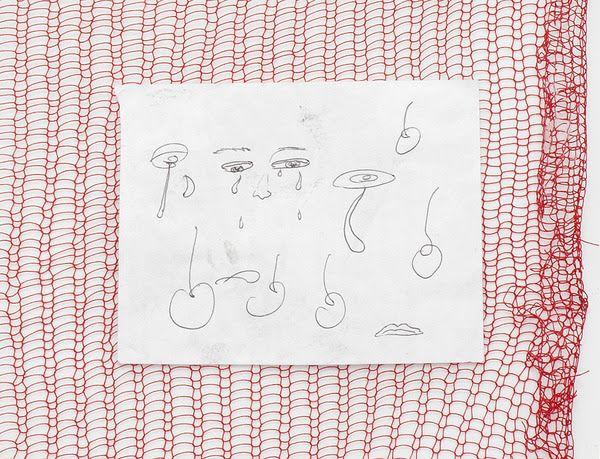 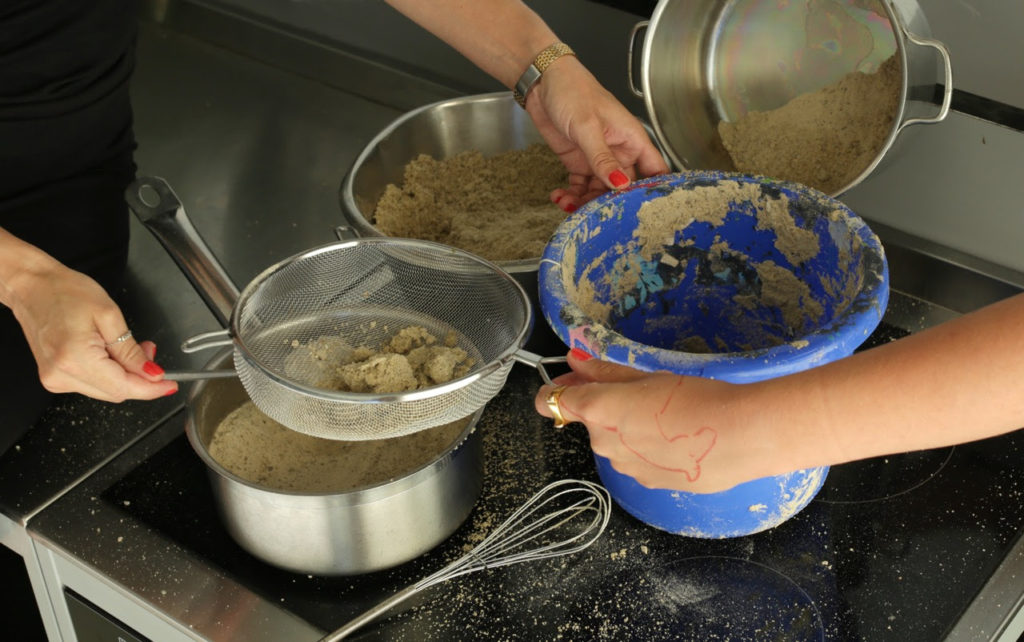 The show is called Men what a humble word and is accompanied by an orange and white flyer with the title in simple black font. An echo of the title is written by hand underneath each word, font and hand-written responding to each other. The “L” of the handwritten “humble” kind of looks like someone standing up crossing their legs.

There is very little information given with the curious flyer about Men what a humble word but here’s a review of Holzer’s Keep All Your Friends at London’s Rowing last year as a reference.

‘Hello, I’m here’, or ‘Hi, this is what I’m doing,’ is a remark that Berlin and Vienna-based artist Lisa Holzer’s work implies , making itself at home inside your stomach and your head. There is a transparency with which this work conducts itself like in Holzer’s recent performance for the opening of I Did Love You Once at Vienna’s Galerie Emanuel Layr where she a) cooks spaghetti, b) lays a piece of it out on the ‘transparent but milky surface’, stroking it like a single strand of hair and c) photographs it with a large, intended flash. The flash and the spaghetti together feels like a relationship and one that you have seen directly into or inside of and as a result, cannot thus un-see, un-do or un-stick. That Holzer displays eight new pieces at Rowing in the same 92 x 72cm milky-thick white frames she has previously used throughout her practice, holds perfectly the recurring sense of something or someone trying, openly, to hold on to something.

For Keep All Your Friends, running from May 1 to 30, Holzer has put something much heavier inside all but two of her frames in comparison to previous images. Four of the pigment prints on cotton paper host photographs of Camembert cheese where the top rind or layer has been removed, its insides left to melt. All of them are titled ‘The Man Who Is Unhappy’ (2015) and in all of them, the inside of the cheese – whilst still, and importantly, surrounded by a thin layer of its skin – is facing the viewer fully. These four images are particularly head-sized. Applied on top of all eight of the glass fronts is a subtle layer of ‘crystal clear’ polyurethane, which has bubbled into small clear bumps, and which, as is pointed out very clearly in both the descriptive press release and in a text written on top of two other works in the show (both: ‘Head of a Partisan’ (2015), is sweat. Or potentially, condensed breath. It is for this reason that somehow the works inside and behind the glass – despite their gooey and wet everything – can also be dry.

Holzer assembles her content and her materials in a way that is like, ‘oh, please be something more!’ In ‘Head of a Partisan’ (both, 2015) an open crisp packet has been imaged upon by and because of the presence of something above it – a lantern that was doing nothing in Holzer’s studio, if you must know. The paragraph of writing, with its illustrative emoticons layered over the top third of both prints, takes the reader through someone else’s head. Yes, it’s clearly the maker of these things, or these moments in this room, but sometimes also just the head of someone who feels, as the text says, “so out of time, so out of anything” and who thinks about breakfast, “How was breakfast?… You took my breath away. Breakfast?” There is always a relationship, or at least an attempt at one where dissonance crystallizes on the inside of things: the viewer; the affinity with wartime artist, Jean Fautrier – whose titles Holzer has borrowed for hers; and the images. These thoughts crystallize too in this show.

The biggest knot is produced by the final print of the room, ‘All Alone’ (2015) – if you go left to right. Inside an egg-shaped dollop of mayonnaise is a small and light inverted image of a cat, which Holzer sourced from the Internet. The combination of elements feels a bit like the flash and the spaghetti again. Keep All Your Friends, another borrowed title – this time from a song by Art & Language and The Red Crayola – could be like juggling. Options are held open on the glass front – the sweat comes out of the Camembert, the transformed inverse crisp packet and the yellow shampoo inside a work, called ‘The Pretty Girl’ (2015), but it could also be going back into it.

Holzer makes good art because in one breath there are so many words but there is also something that stays indescribable: which, as the text, again printed on to ‘Head of A Partisan’ says, “you will not be able to remove”. **

Lisa Holzer’s Keep All Your Friends is on at Rowing Gallery, opening April 30 and running to May 30, 2015.

Happening a while back but one not to be overlooked, Camden’s Rowing in London presented a nine-strong exhibition of artists inspired by the 1988 teen cult-classic and would-be mass murder movie, Heathers, running September 19 to October 25. Curated by New York’s Alex Ross and crossing generations born before and beyond the 80s, the exhibition rides on the inescapable cycle of contemporary art co-option in popular culture via its “impulse to vampirise levity as a cipher for criticality and de-subjectivisation”.

It takes the Michael Lehmann film’s quiet nods to artworks – obtusely referred to in a list of timings appearing on the Rowing exhibition page in lieu of a press release – across 11 pivotal scenes underscored by their appearance in the background. The Heathers exhibition in turn takes this idea of appropriation and depoliticisation of a post-Pop Art space further, by presenting works that reintegrate popular, or more specifically, commodity culture back into the artwork, begging the question, ‘what’s the difference anyway?’ Hence there’s May Hands‘, ‘Endless Euphoria (Calvin Klein)’ (2014) – a minimal white netted canvas dotted with the fashion house’s perfume cards – next to ‘Guilty, (Gucci)’ (2014) and Deanna Havas‘s ‘Regrind (4)’, a papier mâché plaque on foam crudely painted with brands, a browser window and fragments of text including, “Brand Name: Famous”.

Bradford Kessler‘s ‘Mistletoe (3,2,1)’ (2014) hangs from the ceiling at the Rowing entrance – tasteful snow-white head harnesses fitted with crisp new tennis ball gags – while Daniele Milvio’s glazed raw clay scallop bowls are mounted across four walls. That’s where Kait Mooney‘s titanium negative ion necklace for the athlete in ‘third initial’ (2014) lies scattered in a scrawl on the floor. It’s tubing and brass fittings lead away from Erika Ceruzzi‘s tumbling wall hung, ‘Ribbons (Electrobank)’ (2014), across from Rachel Maclean‘s ‘LolCats’ (2012) 15-minute video, on the floor in the corner. The latter artist performs famous cultural moments throughout history – from a Katy Perry interview (“I wanted them to be, like, Britney Spears-white.”) to a scene from The Wizard of Oz (“But, I don’t understand”) – as the ‘LOLCat’ meme personified in a hyper-stylised fantasy landscape.

Where the art and the curatorial concept comes to bear most succinctly, is in Lisa Holzer‘s framed painting of ‘Nude monochrome’s naked dream with Ei passing under spaghetti (blushing orange)’ (2014), where the Tiqqun-inspired framed pigment print behind glass reacts as much as it mediates in an interface between person and projection (“girly-like shy rather than ashamed“). Anime stickers are stuck across from frame to transparent screen in the paler ‘It’s my hair and I can do what I want with it!’ (2014) print, confusing where the image ends and the ‘reality’ begins. The causality dilemma is extended to video game culture, high school shootings and the socialised violence, misogyny and alienation of conventional masculinity in Andrea Crespo‘s empty Playstation 3 game disc boxes. The Complex Cases feature blurbs taken from existing blog posts left behind by soon-to-be teen mass murderers in what’s becoming a growing trend building up on copy-cat actions by the likes of Jeff Weise and Elliot Rodger, with Jokela High School student Eric-Pekka Auvinen insisting, “HUMANITY IS OVERRATED!” **

Heathers group exhibition was on at London’s Rowings Projects, running September 19 to October 25.