The ongoing club night music series is stacking up an impressive resume, and Whybray is responsible for bringing in some big talent over the last year, including DJ Warlord, GFOTY, and Palmistry.

This month promises to be no different, with performances by English performer Mica Levi a.k.a. Micachu of Rough Trade Records‘s Micachu & The Shapes (who recently wrote and recorded the soundtrack for the UK sci-fi film Under The Skin), as well as emerging pop-synth artist Et Aliae, high-energy London trio Kero Kero Bonito, PC Music‘s Spinee, Dora Tha Xplorer, and モニカ·σníkαミックス.

Simon Whybray‘s JACK댄스 night returns to London’s Power Lunches for another night of performance and party on Jun 13.

Listen to the mix below and see the JACK댄스 Facebook page for details. **

Simon Whybray is the fourth artist contributing a digital wallpaper to Desktop Residency for 2014, downloadable from the site April 15 to May 4.

Never one to miss the opportunity to give his JACK댄스 night a plug, the artist, hacker, TEETH band member and by extension @ponfitex twitter hoax orchestrator strikes a pose with the pop-electronic night’s familiar logo for a face. 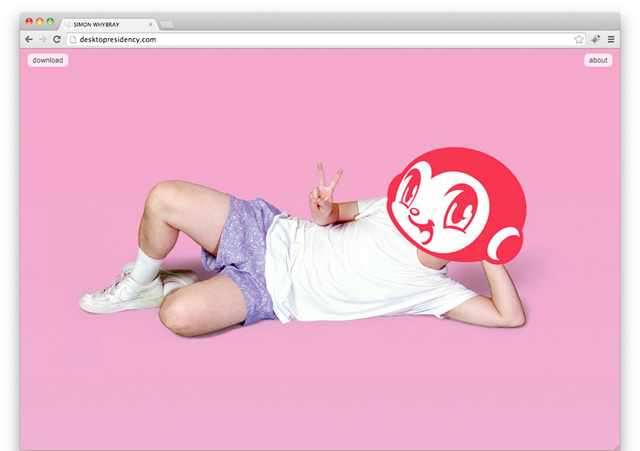 Featuring an incredible line-up including SHEIKHA night affiliates Palmistry (who also released a brilliant mix on DIS not long ago) and Throwing Shade, plus Heartbreak High-referencing Yola Fatoush, Why Be from Copenhagen, Brassica, Megatech and others.

You can also read a recent review of ‘JACK댄스’ and check the Facebook event page for details. **

Three London producers to pay attention to: A.G. Cook, Felicita and Sophie. Playing the JACK댄스 night at Power Lunches –in support of Berlin’s DJ Paypal and the French Tielsie –last weekend, the aural triptych of underground cute girls that are boys (or thereabouts) play to a crowd drenched in the ecstasy of joyful celebration as a lightly transgressive exercise. There’s a furry hand bag, an intense weave and lots and lots of gesticulating, as this impossibly affective electro pulls from the bottomless resource of the internet, reconstructing it into found sound tributes to the higher order of popular culture-at-large.

With these pop proclivities in mind, perhaps the most relevant outfit observation of the night is a replica Heron Preston #BEEN TRILL NASCAR bootleg, with the red and white smiley of the JACK댄스 logo where ‘Ford Racing’ should be. But while Preston taps into brand power as a form of resistance, event organiser Simon Whybray and invited artists parasite pop. Injected with the unavoidable grime and garage influences of the London underground, A.G. Cook, Felicita and Sophie cheerfully draw it together with J-pop, early-millennial R&B, Disney soundtracks and uber-commercial hip hop. Fun is to be had and insecurities ignored for the short window of time where these very elements of ‘popaganda’, and the oppressive cultural norms they peddle, are manipulated and mangled into an organic movement of queer communion.

Potentially drawing from a broad tradition of YouTube youth culture –from nightcore’s 125 – 130 bpm speed edit juvenilisation of all sorts of ‘trances’ and ‘dances’ (all the way up to its Katy Perry and Taylor Swift mix bastardisations) to the early days 8-bit of Anamanaguchi and Unicorn Kid –has evolved into a fully realised movement of smart music made fun. It’s a testament to the JACK댄스 (the characters are Korean for ‘dance’) event name, where a rapid-paced super-reality of modern living is moulded into a truly transcendent post-human scene. Up here all boundaries and binaries are ignored to be inhabited largely by the hyper-realised avatars and Leslie Kulesh-defined “tech-tangible cyborg” producers of A.G. Cook-run netlabel PC Music and beyond.

It almost feels like a betrayal trying to contain the essence of a night like this into writing, but to be fair, this is only a short pit stop in the hyper-speed non-present of an ever-evolving form. Time collapses, space expands and a tactile “bip, bop, bap” pans and weaves anxiously across the room during the earlier A.G. Cook set; a girly giggle materialises in the top left corner, a hard and heavy gush of bass falls, and lands in a pool at your feet. A remix, recalibration and revival of sounds grounded in the mainstream, Sophie withholds the drop of ‘BIPP’ from a group gagging for it as the unfinished “I can make you feel…” stammers in suspended tension at its climax before grinding into the unsettlingly elated garishness of music-as-pure HD delight.

This is music you can touch. Or more specifically play with, as it bounds and bounces, stops and drops at will. Sometimes it disappears completely, knocking the wind from the moment, pulling everything from under you and leaving just a single, lone sound, an object, to taunt and be engrossed in. There’s the climbing, intensifying snarl of a chainsaw-sound accelerating to breaking point in Sophie’s set, a squealing vocal or rhythmic clatter, toggling back and forth, during A.G. Cook’s. They take time-out for the fetishistic dissection of any musical element –pitch, speed, volume, form, texture –before another deep swell brings it crashing back down to the dance floor.

It’s like this music is a physical representation of a groundless collapse of time and space through online interaction, except with a still powerfully localised aesthetic that rides on the frenetic speed and instability of modern London. The data overload, the overwhelming information of city life is compressed into a single ecstatic release, a purge of the sights and sounds that, rather than processing it yourself, has been processed for you. It’s been masticated into a dynamic mesh of sounds, samples and references alive with their own personal and historical narratives.

As music that has gone beyond pastiche –a tinkling xylophone, a babbling baby, Fireman Sam theme song –all three of these artists generate a lucid dream-like musical recreation of the crowd-sourced, hive mind network that the internet was meant to be. It’s since been overrun by mainstream homogenisation and corporate culture, so resistance comes in the form of manipulation from the inside. Songs are constructed from the detritus of social decay and colonised by this new, and importantly, optimistic drive to subversion. Super-complex forms, loaded with different emotional information and evoking a purely sensual arousal come in A.G. Cook-played tracks like Dux Content’s ‘Like You’. That whistles meanderingly through space, while extracting the sentimental essence of words like, “baby, if you’re lonely, you can call me” over a nervous chime melody, while losing none of it joyous motion. This is the modern hybrid, the Human 2.0. of preteen androgyny in ‘Moose’ as it reclaims “swag” from its macho hip hop-to-pop-appropriation and returns it to its rumoured social margins –all over a palpable kick drum strut.

Pulling liberally from the indistinguishable digital and IRL worlds to feed into its compound of unhinged morphogenesis, this is music that emerges, evaporates and interacts with its own loaded narratives through purely aesthetic dissections of sound. It’s sculpture that becomes sentient as Hannah Diamond whoops, “Give it to the cutest girl!” in ‘Keri Baby‘, while poignantly pointing to her own objectness, as a simulation of a simulated vocal mechanically recites, “tell. me. if. you. want. to. watch. me. play. with. my. hair. on. the. TV.”. Because, as much as “Keri” doesn’t want “to be an mp3”, neither do these intensely hybridised, compacted and infinitely mutable soundbytes of total affective response and synthesised authenticity. This is an aesthetic with a conscience –a philosophical movement without a philosophy, utopianism with no grounding ideology. It’s music made through a powerful intuitive process, overriding the plasticity of its materials and feeding, informing, articulating an alternative future. That’s not through radical action but the effervescent cheer of endless enjoyment. **

JACK댄스 is a regular club night in London run by Simon Whybray. The next one is on at Hysteria in Dalston, March 7, 2014.

Man of many talents Simon Whybray will be putting on a night at east London’s Power Lunches, JACK댄스, on November 15.

As an artist, designer and hacker, as well as one of the minds behind the famous ‘ponfitex’ twitter prank with his band TEETH, the line-up featuring DJ WARLORD, DREAMTRAK, Tom Vek, Ana Caprix, STAY POSITIVE  + others, will no doubt suit the aesthetic.