The Endless club night is presenting Ecco2k at London’s The Yard on November 4.

The Stockholm-based producer — who’s worked with the likes of other Gravity Boys-affiliated artists and emcees Bladee and Thaiboy Digital, as well as producers White Armor and Yung Sherman — will appear at the Hackney space and venue with support from Manchester-based producer Croww.

Also performing on the night will be resident DJs 5tarb01 and NON Records co-founder Nkisi.

“I don’t know why I care about brands,” says Bladee, disarmingly, at one point in our email exchange. It’s a slow back-and-forth that takes place over the course of a couple of months, owing to our mutual busy schedules as well as his sporadic internet presence and penchant for short, elusive answers. It’s this response that stands out to me the most because of its abrupt refusal to analyse or mythologise something so central to his music. Take his track ‘carwash’ for example, where he creates a constellation of Adidas, Bape, Star Wars and Diet Coke within the lyrics of one short song. In response to a different, later email, he prefaces his response with the textual shrug: “I can’t think of any interesting answers to these questions.” Like much of the Swedish producer/singer’s music and the music of his crew Gravity Boys (as well as their close associates and collaborators Sad Boys, led by Yung Lean), his interview answers work by elision, telling you volumes by what they don’t tell you.

Bladee is at once prolific and withdrawn. His lyrics list melancholic truths with the same blinding candour with which they namecheck Gucci, Lamborghini and Mastercard, each line never far from the kind of brand one-upmanship or emotional over-sharing that characterises most of Twitter and Tumblr. The same can be said of his actual Twitter presence; where Bladee tweets constantly, and yet barely makes it even halfway to the 140 character limit. After following him for months I couldn’t tell you anything about Bladee other than that he’s excellent at capturing that particular empty feeling that comes from being on the internet just that little bit too long –that jumpiness that comes with getting an RT; that listless scroll down the feed of someone you haven’t spoken to in years; that objectless transaction made only to feel a sense of ‘real’-world achievement. A few recent updates from Bladee’s account include “Just want u to worry” and “Please wait”, both directionless, both feeling like decontextualised snippets of much more complicated interactions, hovering somewhere between being aggressively TMI and frustratingly opaque –a too-familiar online dynamic.

“I like buying things when I’m bored or down or whatever,” Bladee elaborates, “but eventually I get tired of the clothes or whatever it is and the joy it brought me wears off. I guess it’s about that. Spending money is awesome but it’s also depressing.” He follows this up with a line it’s easy to imagine came straight from his Drafts folder: “U can’t buy love.”

Operating in the perma-lean, auto-tune-blasted hip-hop arena of Yung Lean, who he’s produced several tracks for, Bladee’s own debut mixtape GLUEE embodies this whole sentiment. “Money got me spellbound,” he intones on ‘spellbound’, “hit the mall in the sunshine.” It’s a summertime anthem for a suburban generation stuck scrolling through Twitter on miserably long, empty days, paradoxically taking the opportunity of sunny weather to spend their time in pristine air-conditioned rooms shopping for another life. ‘ebay’ pays testimony to the same experience on a digital plane; the tape meanders listlessly between the ‘real’ and the ‘unreal’, through screens and windows, making little distinction between the two and constantly searching for contact and meaning. “I wish you would touch me, touch me on my touchscreen,” he sings in a pixellated sigh on ‘unreal’.

“It’s mostly being bored a lot that inspires me,” Bladee says at one point, pointing again directly to an absence as an answer. Through our chat, he tells me that he used to work in a daycare centre, that he looks up to Chief Keef and that he dislikes sci-fi movies but is making an effort to read more sci-fi literature (but when I press him on this, he says “I actually never read sci-fi”). What was it like growing up in Stockholm? “Good I guess nothing special. I had a good time in school and friends etc.” 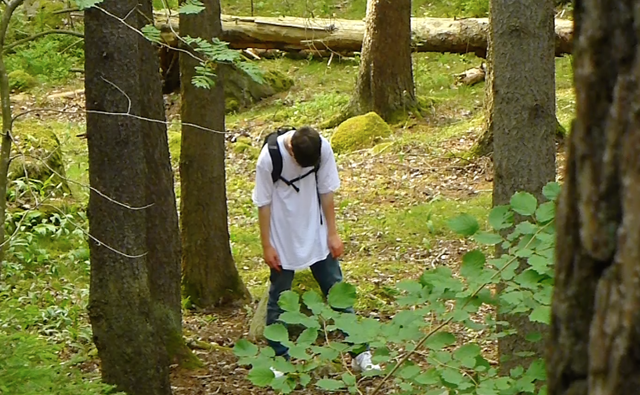 The life Bladee projects in his videos reflects this IRL vagueness, presenting a direct visual contrast to the consumerist excess of his lyrics. In my favourite, for the track ‘EVERLASTING FLAMES’, he and collaborator Thaiboy Digital stand in the middle of a non-descript empty road in hues of grey and brown, dressed for winter in such thick coats they can scarcely swing their arms to the beat. In his characteristic listless delivery, Bladee points to numbness and space as the ultimate fear: “I was so afraid ‘cause I couldn’t feel the pain,” he sings, becausenothing is more terrifying than nothing. The whole aesthetic is echoed again in the video for ‘Carwash’, where he performs solo against a camera angled up at the sky for a backdrop, and ‘Bleach’, where he and ECCO2K stand against neon-lit walls, the minimal variation mostly provided by close-ups on the logos they’re wearing. The clips carry the same impact as the work of fellow Swede Ilja Karilampi, particularly his work for Stockholm’s Biotop exhibition, in which brands are printed on a mirror that does nothing but reflect the barren space of Bruno Liljejors‘ model wildlife surrounding it.

Typically atypical, when asked if he’d like to share any music he’d been working on with us, Bladee’s response was to send along a 10 minute mix of Swedish hardcore punk “4 the summer :-)”, which you can hear above. Sonically, it takes nothing from the same toolkit as him; in fact its frantic throes, overstuffed with screams and thrashing chords and other traditional sounds of youthful anger, is the total opposite end of the spectrum. But its ferocity speaks to the same environment that Bladee’s auto-tuned odes to nothingness are formed in; both are a react against space and time. One takes the route of bottling and unleashing wild anger, the other scrolling for distraction through online stores as though hooked up to a narcotics drip representing another world; the ‘reality’ to our ‘un-’. Both strike me as music that could have been made by people who exist in ellipses, the ones who tweet “Felt so………for a sec”. **

Bladee is a Stockholm-based producer. You can download GLUEE from his Soundcloud here.