Maybe not the most attractive name for a new gaming system but who said iPod, PSVita or WiiU are? 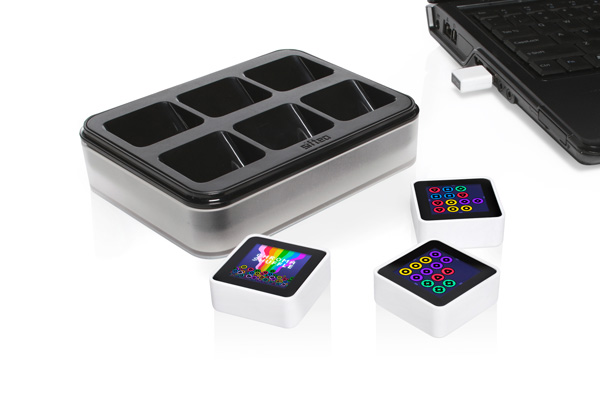 In any case here’s a new option for your free time or for your kid’s time. Based on a MIT Media Lab technology (remember Zigelbaum + Coelho’s 6-40×4-80 light cubes also out of the MIT lab?) … the Sifteo Cubes.

These cubes presented @ last CES and also during SXSW are basically 1.5-inch blocks with full-color screens that respond to motion and start interacting with the player and each other, as soon as they are picked up and moved around.

Ahhhh if Tamagochi inventors had developed their original ideas much further…. (these probably already exist in Japan, the MIT just picked & developed an old hidden idea ….).

The blocks come in sets of three although the real fun (and if you were to play with several people) is using up to six for a single game.

To allow all this “magic” happen each cube comes with an embedded 3 axis motion-sensing accelerometer & a wireless communicator (with your computer, which has to be turned on simultaneously and run their “Siftrunner” software to coordinate & synchronize), too bad their displays are no touchscreens!

You can appreciate some games on the video & on their page, but with the help of you intelligent developers we’re pretty sure that like with any other open platform it could really explode (hopefully), and then, we could be talking about another alternative gaming platform!! Apple taking note?