The Engadgetians got independent! That’s how most on-line publications have described the launching of flashy site “The Verge“, our new technology, gadget and nerdiness temple. And we salute Joshua Topolsky, Nilay Patel and many other ex-Engadget columnists with admiration and devotion, will we ever look back to Engadget?

Despite the relationships and exclusivities AOL’s Engadget team may keep enjoying over the coming months with manufacturers they’re surely already suffering from a tech-headache since Thisismynext was launched a few months ago.

After a lot of buzz and a close partnership (and funding) with Vox (who aren’t new to on-line media) The Verge went live last Tuesday with a design, look&feel that many people @ AOL may envy for their own blogs. As Josh pointed in a recent intervew… “To me, design is super-important”, and you can certainly feel that on their new adventure. 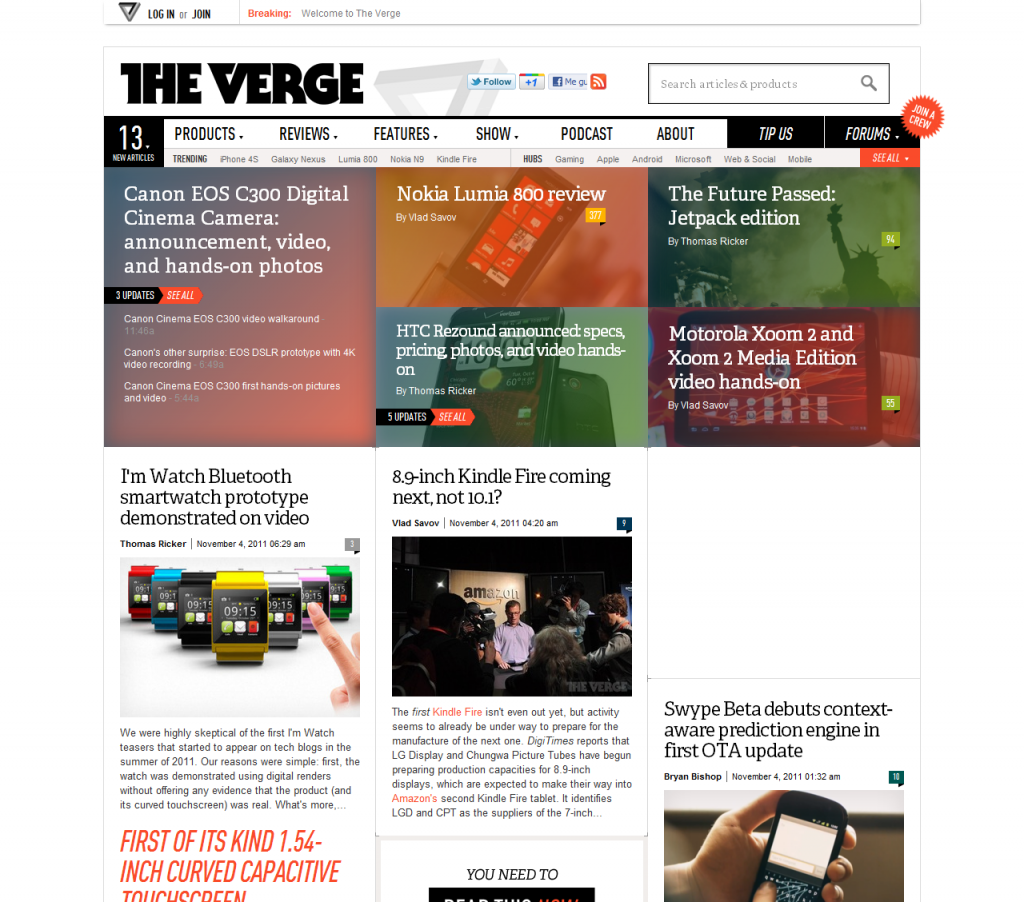 An exercise of portal design into the future leaving behind the traditional blog layout although guess who’s behind it? Exactly the same people that won a webby award for Engadget’s redesign when AOL came in… Code & Theory.

Many similarities with their previous employer’s blog although the new team have been working hard on bringing some differentiating features so us, gadget lovers (who don’t like to name them “sexy”) stick with them and click on their Samsung or BMW ads rather than those of Engadget. Features like a forum, a product database (sort of absorbing Gdgt idea?), in depth interviews & analysis (some of them look more like research papers than mere blog posts).

(the urgently need to improve the quality of their video reviews…)

We’re going to have a dilemma from now on when choosing our daily tech-news bible, Engadget has become this sort of messy blog with alts, mobiles and hds sub-blogs that certainly don’t help when scanning for our preferred news, Gizmodo…. is more of a pop -tech site than a serious publication (although Engadget never was serious was it?), and now The Verge with this sort of grid news layout… the visitors & advertising partners’ battle is served!