The group exhibition bases itself on the acknowledgement that the 4Ps of domestic clichés—porn, pets, plants, and pizza—have left their realm of domesticity and started to exist in the virtual space of the internet. 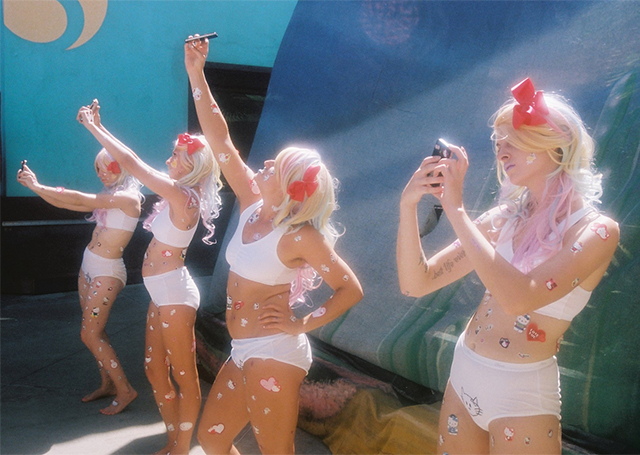 The impossible desire of breaching the screen is a standard motif of much contemporary art concerned with the ‘digital’ and fixated on the ‘digits’. For Berlin-based artist Aram Bartholl, though, that’s a desire that’s not only possible but already realised via the early ‘first-person shooters’ of archaic video games. Taking its title from a player level of 1993 harbinger to VR violence, DOOM, Hurt me plenty – running at  DAM Gallery September 12 to November 14 – lingers at the halfway point between ‘I’m too young to die’ and ‘Nightmare!’.

Representing said reach into virtual space via the pixelated hands holding guns of these Duke Nukem 3D days, the exhibition immerses its audience in a conceptual milieu that not only confuses any distinction between online and offline notions of reality and materiality but time itself. Large-scale cut-outs of raster images as screen prints in low resolution grids on wood. Framed portraits of passwords, from a database lost by Yahoo! in 2012 and reinstated as a wall hanging made from pencil and paper printed by pen plotter. Graphic cards, usually running unseen as hardware in a computer, are printed, enlarged and electrified, leaning on a wall; they’re fetish-objects for gamers, now seen and aestheticised via hi-res, but still 2D, representations.

In a ‘private tour’ of the Hurt me plenty exhibition, Bartholl films and explains his work, his hands only visible and motion-smoothing giving an impression of ease through video enhancement. “It’s a very 90s space,” he says about an installation that cross-references a timeline of the last two decades of technological advancement, while androids replay recordings of unsuspecting strangers too absorbed in their handhelds to notice they’re being filmed. A tablet screens a commercial for the primitive technology used to crush harddrives (and thereby their data) not far from the real thing, while another shows footage of The Guardian destroying their Snowden files, as compelled by a desperate British authority. The lines linking the private home violence of the videogame with the brutal real violence of the state are fine, but they’re there. And as one tracks these in parallel to the real-world integration of an unreal arena into the cloud, one is inclined to answering in the affirmative when Bartholl asks, “is this already a nightmare?” **

Aram Bartholl’s Hurt me plenty is on at Berlin’s DAM Gallery, running from September 12 to November 1, 2014.