We’re not going to take any guesses on what exactly Jaymes Bowman (aka Young Braised) means by Japanese Tendencies but, if this ‘Murakami’ track is anything to go by it includes ‘punani tsunamis’ and some barely perceivable video game sound effects. Evidently, there are chopsticks and some rap within the slightly ambient online vibes of the forthcoming record, coming out on 1080p, September 3.

Displaying many a post-PC element that is fast coming to define an era, Bowman’s oeuvre spans album titles like last year’s Big Trouble in Little China (also a 1986 film with questionable creeds of cultural appropriation). But, considering this sound of a stoner singing lines like “I came in her butt, now she call me a bummer” into his laptop, while watching shitty b-grade films on VHS player and doing you-know-what with his vibrating control pad, then cultural sensitivity is probably the least of his problems.

Since winning the Best Emerging Talent category at the 2010 Doug Wright Awards for his Lose #1, Michael DeForge‘s work has been through some startling transformations. His latest, Sticks Angelica, Folk Hero, shows him moving into another gear, away from the acidic clashing colours and grotesque humour of his recent Ant Comic and towards a more muted and bucolic approach. It’s one that hints at topicality, while retaining a breezy humour -if not occasionally containing traces of DeForge’s trademark cruelty.

His main protagonist, the fiercely self-sufficient Sticks Angelica, is an intriguing creation. Her occupations are listed in the first instalment and include Mountie, Olympian, Headmistress and cellist, among many others. Physically, Sticks is bold and imposing with a blunt honesty that seems to alienate her from her surrounding animal friends in Monterey National Park, where she has resided since her father was implicated in a financial scandal. All of this information is given over in the first seven-panel chapter, and while the sheer number of words on the page risk overwhelming the reader, DeForge’s simple, uncluttered drawing-style and use of a muted pink and white colour scheme –a far cry from the retina-singeing shades and grotesque body-horror of Ant Comic –ensure that, visually, nothing becomes distracting, allowing the reader full concentration on his idiosyncratic use of language. 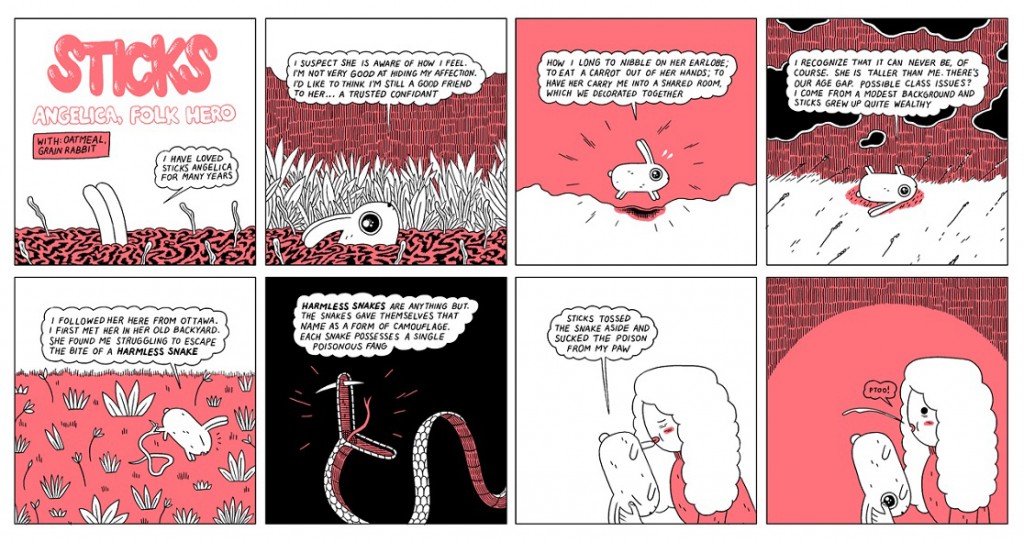 There’s a simple joy to DeForge’s work here. The second instalment consists of a layout of where Angelica lives and DeForge has an almost childish love of rendering the detailed maps and cutaways with his customary cartoonish precision. It’s his use of surreal humour that indicates a move into fresh territories, though. Among the locations and objects picked out are a “Shelter (w/ office chair)” and a “Car (broken) (home to some geese)”. The reader can sense the writer’s enjoyment of the language for its own sake and his revelling in these little non-sequiturs and verbal dead-ends is carried over into the character’s dialogue. Sticks lets the geese live in her car in exchange for their “forest snitching and information gathering.”

“Country geese, City geese, they’re all the same! Nosy, gossiping, waddling their way into the press corps, asking rude questions…tracking muddy water across the parliament buildings, leeches clinging to their bottoms”. This joy in language is almost baroque in contrast to the clipped sentences and gnomic silences of Ant Comic and has a silliness that’s never less than charming, even when the title character’s candour is alienating her from those around her.

While it’s early days for DeForge’s latest creation, there’s a freshness and an innocence to his work on Sticks Angelica, Folk Hero that’s captivating. DeForge, with his innovative layouts, simple and effective character work and newfound love of idiosyncratic language is part of the process of creating the perfect adult storybook. It’s one that satisfies our capacity for wonder, while still maintaining a touch of the humorous cynicism for which he’s become renowned. **

You can see more of Michael DeForge’s work on his website here.

You should know (or just ignore, it’s easier) that one of our favorite public film-producers (the Canadian National Film Board) are organizing their 7th edition of Hothouse! But the bad thing is that you only have until this friday to submit your film…