The Your Face In The Mirror Isn’t Your Face, Similar To Plastic Silverware group exhibition is on at Los Angeles’ Moran Bondaroff, opening November 19 and running to December 17.

Featuring 12 artists — including Trevor Shimizu, Steven Baldi, Anna Betbeze, Keltie Ferris and Marisa Takal — artist-curator Torey Thornton introduces the show with a statement, which interrogates the distinction (or lack there of) between representational and abstract art:

“The line between something that is recognizable and that which is less so or not at all can be thin or pushed; furthermore, it could be argued that all things are representational, and simultaneously, all things are abstract.“

The Mined Control group exhibition is on at Los Angeles’ As It Stands, opening November 17 and running to December 17.

Organized by Allison Littrell, the show features the work of Alison Veit, Brian Khek, Sara Grace Powell, Marton Robinson, Bunny Rogers and George Egerton-Warburton, and examines what the press release describes as “the hidden origins of the products and images that shape collective memory via pure surfaces.”

The text goes on to note the systems of control and consumption that make up our physical bodies and questions whether the influence can be reversed: “Can we have an evolution of the utopian cyborgian identity and flip the mirror back onto ourselves?”

“Try to imagine this abyss: dizzying visions. No identity lies therein. A mother’s identity survives only thanks to the well-known fact that consciousness is lulled by habit, wherein a woman protects herself along the frontier that divides her body and makes an expatriate of her child.” The subject of Julia Kristeva’s 1977 essay Sabat Mater is not the child —“irremediably alien” —but the mother-parent to which it only bears relation while carried inside of her. The mater dolorosa, merely signified by seven sorrows, weeping by her son’s corpse, is otherwise silenced, mute as she forcibly, indelibly, renounces her child to the social exteriors, which the immaculate womb once shielded against. It is this filial catastrophe, the fractures and abstract separation of parent and kin (however not rooted in Christian, woman-as-mother gender essentialism) that is explored in Trevor Shimizu’s solo exhibition New Work at 47 Canal, running from June 24 to July 30.

Immediately visible amongst the large canvas oil-paintings are a collection of comfort objects and icons: a teddy bear, a stuffed otter and companion starfish, the Dutch rabbit character Miffy —outside actors that facilitate peace for the parent to the extent in which they console the child. On the adjacent wall is ‘Baby Expert (Eating)’ painted with ill-defined, faint lines, vague silhouettes with blank-stares, exchanging tips (seeking relief) on getting their children to sleep. Two separate works depict sleep-deprived parents who appear as if they experienced forced-viewing torture à la Clockwork Orange: bloodshot, wilted eyes immune to stimulation. The bipedal robot-parent watching a video of robot fails before not-sleep is watching itself.

To what degree does a shirt collar or a nursing breast obfuscate the parent’s face as the child is held? ‘Breastfeeding in Public (1)’ shows the parent nursing with closed eyes, nearly permeated by harsh, grey brush strokes. The public sphere, too, widens the abyss between parent and child, as Shimizu notes public nursing is a “common scenario that can go well or very poorly”. The cultural submerges the natural, as it usually does. ‘Breast Pump’ elucidates another break, mechanizing nourishment, the silent child can be fed rooms apart from the silent mother after she forfeits milk to the machine. Kristeva promulgates that the classical, Christic Madonna’s release of milk and sorrowful tears helps to reify the ‘extralinguistic’ complexity of her child while ossifying the mother-subject as non-verbal.

Shimizu’s paintings of actress-model-businesswoman-celebrity Jessica Alba operate as a logical opposite of the aching, under-slept parent, showing one of the few human smiles amongst the works. Posing next to the company logo for her all-natural baby products, The Honest Company, Alba symbolizes the pathos of far-reaching materialist history (as objects are imbued with virulent sociability) that render our caretakers as ephemeral agents. The stalled logic of the maternity industry is that the FDA does not oversee pre-natal vitamins but is implicated in the pharmacological industry that manages our biology, beginning when the umbilical cord is cut.

The parent painted with weak outlines or sullen expressions, mostly obscured, delineates the conditions of their existence as one of servility to the outsides of the womb and child’s home: stuffed animals, the celebrity-mother, self-help books, structures that negate femmes metastasize throughout. If not defined solely by tears as is the crying Madonna, then New Work suggests the parent-caretaker may grasp at preservation, but never without resignation to eventual loss and coerced surrender of their child to the autoimmune planet folding into itself.**

This new exhibition carries on with Shimizu’s concerns with the generic clichés of daily life, as informed by its representation in popular media. According to the press release, his paintings depict “sadly mundane and introspective household activities, [and] also suggest tragic psychologies of his protagonists.” 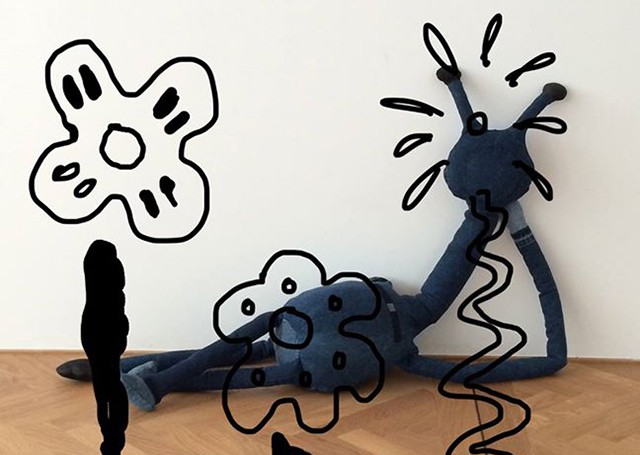