Pele Empire is presenting a self-titled exhibition of work alongside a new light box commission by Agata Madejska‘s at London’s Project/Number, opening September 25 and running to October 18.

Meanwhile, Warsaw-born Madejska’s work will be showing as part of Project/Number’s ongoing series, a site-specific project space in the form of The Light Box Commissions above the gallery entrance.

ANA_CON kicks off a series of events during JK_NET‘s residency at Project/Number, beginning with a talk by Fannie Sosa on March 7.

The activist, artist and ‘curandera’ has much of her work focusing on “transness, divine pride and intersectional radically inclusionary feminism and body/mind decolonisation”, using a gender studies degree “to pop her pussy even more severely than before”.

The discussion will question the role of twerking in contemporary culture and whether it is used as a sexually liberating gesture or just another representation of the “oppressed hyper-sexualised body”. As if to answer its own question, the event will be followed by a TWERK LAB with Joelle D’Fontaine, and drinks after that.

For the first time since its inception, Space-Time will lend its focus to women working in experimental and electronic music, art and bands fronted by women, highlighting the range of sounds over 12 hours of live music, performances and screenings that will spread across three indoor stage areas, as well as a covered stall area.

Filling out the packed schedule are live music shows and performances by over 20 acts, including artist Hannah Sawtell, members of 70s post-punk group The Raincoats and their logical creative offspring Trash Kit, as well as Peepholes, Holly Herndon, Yola Fatoush and Ravioli Me Away – the latter of which also features artists Alice Theobald and Rosie Ridgway, as well as ex-PLUG member and Power Lunches founder Sian Dorrer.

See the Space-Time: The Future event page for details. **

London’s Project/Number art initiative will host the physical launch of Sarah Boulton‘s newly commissioned work for OPENYOURKIMONO on July 18 from 6 to 9pm.

The launch of the online platform, titled www.birdsneedgravitytoswallow.org, will be accompanied by writings and poetry by Sophie Jung, a light box created by Jesse Darling, and what Boulton calls her “holy trinity” online platform/installation/physical work that stands held together with pearlescent spray paint.

This digital launch follows other OPENYOURKIMONO digital commissions including one by Hannah Lees last month. 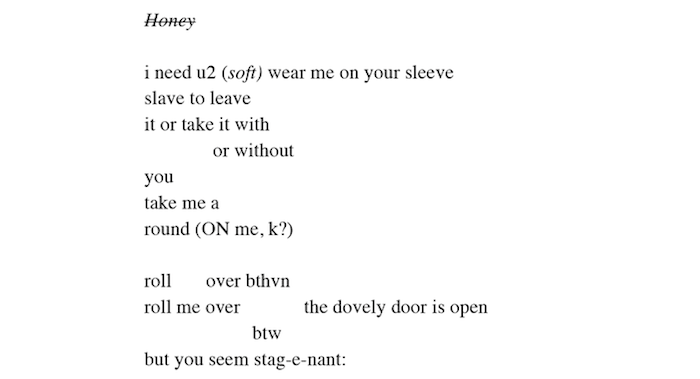 Artist Mat Jenner’s roaming art project, Foam, opens this week at London’s Project/Number gallery. Unlike many art programmes, this one features no canvases, no video installations, no performances. What we traditionally allow to be named as art is conspicuously absent, and instead Jenner presents an archive of one-off 12-inch dubplates commissioned from over 100 participating artists ­– including Yuri Pattison, Benedict Drew, GandT, Cecile B Evans, Jaakko Pallasvuo – along a wall of stainless steel pieces that stand like backdrops. The archives, he seems to say, are the art.

In our email correspondence previous to the show, Jenner is obliging and affable, responding promptly even in the bedlam days prior to opening. The only prickle I feel from him is when I ask for private digital copies of the records for the preview that are sure to exist because, well, we live in the digital age. “No to copies,” he answers bluntly, “you have to be with them to listen to them”.

In this way, Jenner’s Foam functions as a response to this modern religion of ours in which everything exists in its digital form – first, after, alongside, but certainly. The name of the project speaks to its expansiveness, its malleability, and that of the archives – Space and time are reborn to us today – to its design. The line, lifted from Naum Gabo and Antoine Pevsner’s The Realistic Manifesto, harks back to the religiosity of this sentiment: we are reborn only because a rebirth is necessary.

The revival to which Jenner alludes is that of physicality, of the reverence we have for those things which we still can hold. The archive, in its components and its entirety, echoes the sentimentality of all those who still cherish the physical copies of the things they love ­­– the frayed edges of the book, the splattered paint of the frame, the smooth finish of the LP. “The insistence on a restricted physical relationship with these records is an attempt to explore the problematised condition of these records as artworks,” Jenner writes in an email. “It is a romantic and futile attempt to negate their dissemination. By doing this I’m hoping to slow down an audience, to make more explicit their spatial and temporal relationship to the work.”

It is an ode to a time past, as Jenner knows, necessarily nostalgic and futile, but it is just as much a nod to a future that Jenner knows is his to create. In positioning the records as art, he revives the act of listening to that of performance, or rather to that of participation in a performative act. Listen to them as though for the last time, Foam seems to say, echoing the sensibility of Gabo and Pevsner in their manifesto. Listen as though your life depends on it.

The conceptual framework of the project functions alongside its more pragmatic, sociable one, through which Foam functions as a catalyst for creativity. The range of archival material is expansive, including spoken word, field recordings, electronic noise, and soundscapes, among others. From the minimal glitch soundtrack of Brian Moran gleaned from the digital data of Snapchat, to the Gregorian church chant style of Mark Dean’s Nico cover, to Paul Purgas’ dark electro sounds derived from 3D stimulations of architectural interiors, it is apparent that the conceptual mentalities of the participating artists have created a breed of sounds all of its own. “It is one of the best compliments I could have had about the project,” says Jenner, “that the artists involved want to run with it”.

And run with it they did. Participating artist Charlie Woolley took his faux metal band idea and made it real with the formation of Lead Pipe, and Jesse Darling took her audio cover of Drake’s ‘Marvin’s Room’ and produced a whole video for it. In that regard, Foam functioned as a creative jumping point for works that continue to live and expand outside the contours of the exhibition. The visual artists participating do not go gently into the good night of their visuals, leaving the making of LPs to established musicians. Instead, they remain all of it: artists, musicians, creators, living out the last lines of Gabo and Pevsner’s text:

“Art is called upon to accompany man everywhere where his tireless life takes place and acts…so that the flame of life does not go out in man.” **

The first exhibition of Mat Jenner’s peripatetic Foam project is running at London’s Project/Number project space from May 23 until June 15, 2014.

The UK edition of international exchange between LA and London, Project Lalo is running across five venues, from March 5 to 8.

Featuring art and artists at IJV, Transition Gallery, studio 1.1, Campbell Works and Project/Number, with Kim Schoen, The Black Dogs, Michelle Chong and Roni Feldman among them, spaces from the two cities have been paired off to host a cross-section of work from both.