The How far to open up? group exhibition is on at Graz’s Forum Stadtpark, opening February 17 and running to February 25.

Accompanying the event is a text by Muhry who analyses the “longing, desire, obsession, and the projections resulting therefrom” that make up the basis of the exhibition. Looking at ephemerality, vulnerability and intimacy, the artists explore what it is to yearn, both physically, as an act of production, and mentally.

The event, now in its 43rd year, will be held at both the Grand Palais and other locations they’ve named ‘Outside the Walls’. Curated by Christophe Leribault and associate curator Lorenzo Benedetti, FIAC will bring together over 1,500 artists and 175 galleries from 26 countries.

There’s an exciting line-up of artists’ film at Cinéphémère including Heather Phillipson, Laure Prouvost, Cécile B. Evans, Will Benedict, Cally Spooner and Yasmin Davis among many others.

Some galleries and events to check out:

See the FIAC webpage for details.**

The artist makes work that spreads meaning across multiple medias and mediums in build-up objects and installations and inside single images themselves. For 2, we are introduced to the exhibition by an uncertain correspondence between the title and a blurry black and white image of two people with one of them making a peace sign to a camera as the exhibition image.

The artist has recently shown at LA’s Martos LA with solo exhibit, Good From Afar / Far From Good and alongside Sarah Ortmeyer at Tank.TV.

Also on at Vilma Gold running for the same period will be an exhibition of work by Lynn Hershman Leeson, Lynn Turning into Roberta, referencing the time the artist spent four years in the mid 1970s moving her physical persona and her life’s traces into that of another fictional being constructed and called Roberta Breitmore.

See the Vilma Gold website for (limited) information on both shows**

Philipp Timischl‘s Good From Afar / Far From Good solo exhibition is on at Los Angeles’ Martos LA, opening September 11 and running to October 17.

The Austria-born artist’s show takes it’s name from RuPaul’s Drag Race and explores normalised masculinity and heterogeneity as represented on screen, via multimedia sculptures spanning painting, photography and video. With titles like ‘Just do it normal (masc)’, the exhibition intends to interrogate representations of queerness and contemporary gay culture in mainstream media, particularly its “reliance on heteronormative terminology and traditions, even as expanded concepts of gender and sexuality are being explored in mainstream media”.

tank.tv is bringing in Philipp Timischl and Sarah Ortmeyer for an exhibition titled MEDITATION UNITED, running at the London space from April 2 to April 10.

The two Vienna-based artists are continuing their run of collaborative work, having previously shown at Palais de Tokyo, MoMAW, and MAK Center. In MEDITATION UNITED, Timischl exhibits a collection of printed fabric banners from his latest exhibition at Künstlerhaus Graz. Normally suspended from the ceiling, the banners are manipulated to create a “series that deals with privacy, intimacy and repetition”.

Ortmeyer, on the other hand, creates an environment made from a series of life-size portraits. Using the David Beckham Panini Stickers as unlikely inspiration, she plays with repetition in the now archaic practice of collecting and portraiture.

KM-Künstlerhaus has got a packed night tonight, featuring an exhibition by Philipp Timischl, a book presentation by Sax Publishers, and a performance at 8pm by Lonely Boys.

Timischl’s exhibition, titled They were treating me like an object. As if I were some sextoy or shit. I don’t wanna see them again, is running at the Austrian gallery from December 6 to January 22, spread over long corridor-like hallways plastered with poster-size artwork and video through which smoke machines gently billow out cloud-like puffs of foggy vapour.

The exhibition is accompanied with a book presentation of Timischl’s print book by the same name by Sax Publishers, and the night is capped off with a performance by Berlin/Vienna’s Lonely Boys. 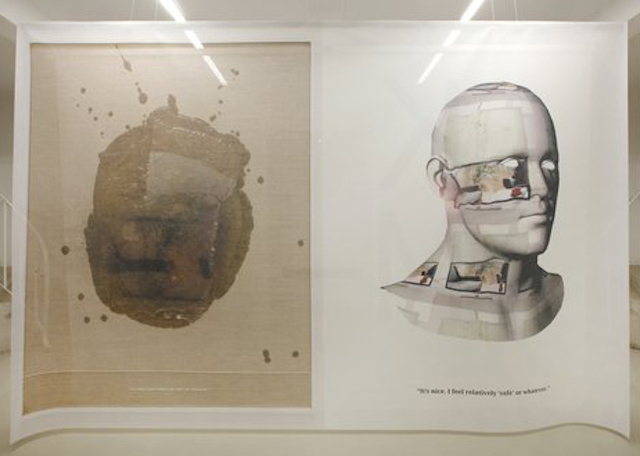