Leo Luchini is launching a new video for his ‘Everybody Kno’ track at South London’s The Tasty Bakery on March 26.

The London-based emcee is responsible for organising last year’s impressive Ariel 2.0 programme at Bold Tendencies, which included performances by the likes of Hanne Lippard, Nkisi, Tami Tamaki and Felicita. For this, though, it’ll be the launch of a downbeat hip hop video featuring a rapping Leo Luchini in “slo-motion in a blue-lit carwash”.

The event, held in the above-mentioned Peckham jerk chicken restaurant, will feature a DJ set from the man of the hour himself and performances from NTS and Balamiii radio DJs Born n Bread and Mock & Milli.

London’s NTS radio presents the sixth edition of their Parallel Visions series with Felicita and new live show WISH at the ICA on June 4.

NTS has been running Parallel Visions in collaboration with the ICA throughout 2014, with six hosts curating interdisciplinary nights of live music and performance informed by their individual tastes.

The sixth edition features an a cappella appearance by Kero Kero Bonito (London’s Sarah Gus Jamie), as well as a “micro-climates” by Lipgloss Twins (who appear, the description says, as “real-life humans at the ICA bar”) and Lil Data (who will “take over” your smartphones”).

Online platform and NTS radio show Tropical Waste is throwing another party, this time with music from Lotic and Felicita to fill out the airwaves, taking place at The Waiting Room in London this Thursday, December 11.

The radio show/music blog/party throwers, Seb and Iydes, have been on the scene since 2010, following new movements in electronic music through their two-hour monthly radio broadcasts from 2011 and regular club nights from April this year.

“THE TURN UP IS REAL” said the writing on the wall at Dean Blunt’s Urban event at the ICA last month. The words were scrawled beneath a white projection screen, the only interruption in the otherwise blank slate the audience faced as club-ready hip hop played in volumes whose snares pierced the skull. Nicki Minaj’s Chiraq and Drake’s Days In The East blasted as the audience steadily swelled beyond the available number of seats. As U.O.E.N.O. played, Future crooning about the turn up in the club in synchronicity with the words on the wall, the room packed out to the extent that some were being stopped at the door. It was sweaty. In the darkness, flashes of UV white radiated from audience members fanning themselves with their new copies of The Redeemer.

The phrase clung to my memory of the whole event, because staring at it formulated a disproportionate amount of the experience, and because it took on new meanings that were presumably unintentional. The turn up was, both in terms of people knocking back beers and dancing to the club anthems, and in terms of people queuing out the door to get a peek at what this mysterious NTS/Dean Blunt collaboration might entail, pretty real.

Until it wasn’t. Gradually, the familiar, slightly sardonic tone that some of Blunt’s work takes on began to bleed through the spray-painted words. The turn up was forced. Guys in Cîroc shirts (the Diddy-endorsed vodka brand) floated around the venue empty-handed, formal sponsors of a party that wasn’t really happening. Music attempted to force a vibe onto the audience to a painful extent. It was 9.15pm – and after around an hour of waiting – before anything happened, and that something turned out to be the projection of a DVD of American stand-up Kevin Hart (Laugh At My Pain). At 9.25pm, people began to leave.

There was a lot to engage with here, with the Cîroc brand representatives looking bored and Hart’s eardrum-grating catchphrases ricocheting around the room in conversation with the hip hop catchphrases scrawled on the walls: the result was a strong, surreal portrait of mainstream culture’s commodification of black men. Hart, during the intro to his full-length performance, took the viewer on a walk around his childhood neighbourhood during which he riffed on white stereotypes of a black upbringing, feigning embarrassment about not having been a great basketballer. It’s notable that in his success narrative, the first white talking head appears in the DVD at the same point they start talking about Hart’s commercial breakthrough and the big bucks. 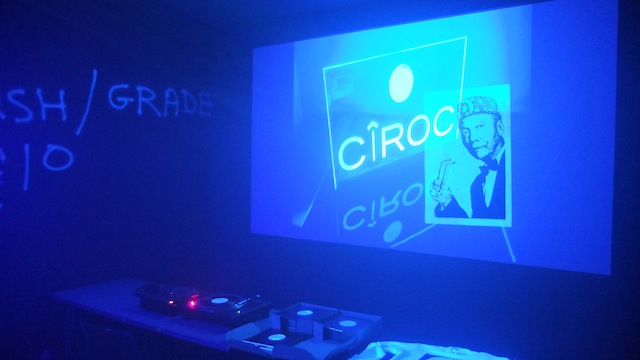 That portrait felt momentarily perfectly achieved; then, it began to feel stretched. Around an hour after Laugh At My Pain began playing, I chose to leave. Apparently Blunt later took the stage himself to read a poem. It crossed my mind several times during the days afterward that the whole event may have been an exercise in driving out the audience members only interested in Blunt’s work on a surface level, but it struck me as sad that the true result of this seemed to be that only those for whom the turn up was ‘real’ –i.e. those drinking and chatting in groups – were the ones likely to stay. Those who came to engage were tested to the point of discomfort, or worse, boredom.

A few days later I found myself in a parallel position at a venue 100 times larger, as I chose to slink away from Miley Cyrus’s extraordinarily hyped Bangerz tour before she played ‘the hits’. The circumstances, on the surface of it, were entirely different: rather than stretched thin, the show was a sensory assault of John Kricfalusi’s stoner cartoons, a grotesque parody of Fade To Mind-like liquid gold imagery that poured itself into the shapes of enormous tits and cherries being put into bodily orifices, and stage-dominating puppetry that included pantomime horses and a 60 foot inflatable puppy. 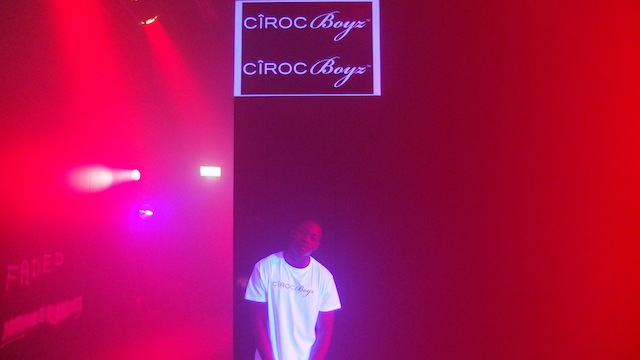 Something that made a clear distinction between the two shows was the obvious gulf between the intentionality of their cultural signifiers. The Cîroc logo dominated Blunt’s event at the ICA; a quiet comment on his refusal to be an entertainer or commodity in an industry that wants to pigeonhole him, while Cyrus somewhat obliviously rolled around holding her crotch on the hood of a gold car, rapping badly, surrounded by shirtless black male dancers and dollar bills raining from the ceiling. The image of hip hop lay like an awkward bumper sticker over Cyrus’s cowboy-boot-wearing show, as her music scarcely ever managed to raise the true fire of the genre, erring instead on the side of watered-down ballads and woozy country-pop. Hip hop signifiers seem shallow and strange to Blunt, but to Cyrus they are as fun and ridiculous as a cartoon baby head that shoots lasers from its eyes or a dance routine with a great big shark, and that’s as far as the thought process seems to go.

Where you might perhaps find a parallel between the two shows is in the general confrontational approach they took. Bangerz is all about sticking two fingers up to the prudes who think they own a female child star’s body and mind, and revelling in a nonsensical, accelerated world built on a hyperactive blend of anything you can find on Tumblr – sex, pop, cartoons, drugs, and everything else. Meanwhile, Blunt also rebels against a role society has forced upon him, by exposing the crudeness of that role. Both shows are designed to test their audiences, to ask: “who did you come here to see? Are you sure you came here to see me?”

One crucial difference seems to be that Miley didn’t want me to leave, whereas it feels as though Blunt almost did. Cyrus and her mother repeatedly described the tour as a ‘party’, first and foremost, in an  interview with Fuse News earlier this year. She may have also waxed lyrical about the ‘educational’ value of the art she wanted to expose her audience to, but fundamentally, the Bangerz ethos is just about cutting loose and having fun. Watching the Bangerz tour exhaust itself of visual rabbit holes that never once aligned with the tepid, conventional music, I couldn’t have felt less ‘turnt up’. And although Cyrus was setting out to antagonise conservative critics, I’m pretty sure that’s not the effect she was setting out to have on her audience. Blunt, though, seemed determined to prove from the offset that the turn up was very much unreal; that it was all an illusion balanced precariously on catchphrases and logos. Where Cyrus set out to create a party and only managed to generate the empty, commodified shell of one, Blunt provided a thoughtful recreation of the commodification inherent in hip hop culture. Though the result of both was an emptiness, the processes couldn’t have been further apart.

Though coming from opposite ends of a spectrum, Cyrus and Blunt both found themselves playing against their audiences, and watching both in one week had a strange symmetry. The sad, sweaty viewers who winced through Kevin Hart while clutching their copies of The Redeemer wanted nothing more than emotional engagement with an artist who gave them tracks as beautiful as ‘Papi’ and ‘The Pedigree’, while the many children (and empty seats) at Bangerz contradicted both the artistic ambition and the party mindset of Miley’s image. That disjunction is the hinge on which both performers are working, refusing to deliver the expected; but in withholding so much from an audience that you humiliate or simply bore them, you risk losing them entirely. Whether or not that’s the aim, it leaves the question of whether a point is worth making to a turned back. **

Dean Blunt’s Urban event took place at the ICA in association with NTS Radio on April 30, 2014.