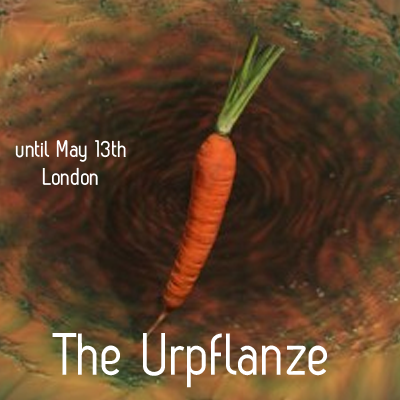 After last summer’s explorative collaboration with writer Esther Leslie and Philip Ball, English artist Melanie Jackson is back to central London presenting readings and extracts in The Urpflanze part two @ Flat Time House, a new look into the the impulse for transformation and novel forms through contemporary science.

In a series of moving image works and ceramic sculptures, Jackson continues her ongoing investigation into mutability and transformation, which takes its lead from Goethe’s concept of an imaginary primal plant, the Urpflanze, that contained coiled up within it the potential to unfurl all possible future forms.

Jackson’s multifaceted work will be installed throughout the ground floor of Flat Time House, the former home and studio of artist John Latham (1921-2006). Her exploration into the Urpflanze is closely aligned with Latham’s preoccupation with ‘the event’.

Jackson’s exhibition extends fairytale themes of absurd disruptions in vegetal scale, from Zola’s ‘revolutionary’ carrot to the fantasies of remediation that science may have in store for us. The work begins in the botanical garden and leads us to the laboratory, from the clay pits to the factory floor, from its own animated voxels to the interior of the screen, and the forms and processes of its own production.

Melanie Jackson has collaborated with writer Esther Leslie on the production of a text that has informed the work and a publication that will be distributed as part of the exhibition. And everything opens next Wednesday afternoon, more info this way.