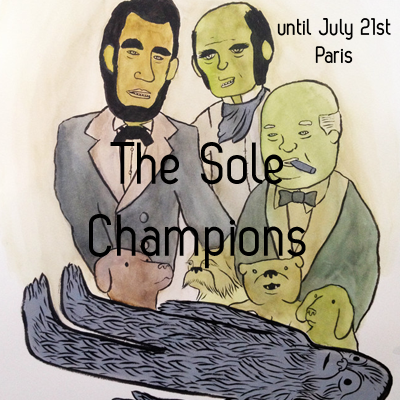 In “The Sole Champions” Mr Dune talks with his imaginary and pure-hearted human inspirations Churchill, Darwin Einstein and Lincoln and and takes them for a personal trip with his bigfoot alter ego hoping they may give him some wise advices in such convulse times.

“On June 17th, 1940, upon hearing that France had surrendered to the Nazis, Winston Churchill declared that the British had become “The Sole Champions now in arms to defend the world cause.” To later add that he was sure that “in the end all will come right”.

After meeting them during his readings David admits these historical figures bring him moral consolation to face up today’s world, so he’s decided to honor them with this new set of drawings and carved masks, because they’re the ones “that will make that in the end all will come right”. Hopefully today’s EU leaders read more Churchull and Lincoln and may get inspired too.